EARLY MAN (2018). Aardman Animations, the studio responsible for those brilliant Wallace & Gromit shorts (as well as the duo’s Oscar-winning feature film), returns with Early Man, a witty and warm-hearted romp that predictably bombed with U.S. audiences. In this latest achievement in stop-motion animated innovation, a curious Stone Age caveman named Dug (voiced by Eddie Redmayne) is dismayed when a Bronze Age tyrant named Lord Nooth (Tom Hiddleston) runs his people out of their valley, leaving them hungry and homeless. Upon learning that his ancestors created the game of football (soccer in American parlance), Dug challenges Nooth’s championship team for possession of the valley, a risky proposition since Dug and his fellow tribesmen (and women) seemingly have no aptitude for the sport. A traditional underdog tale is given enormous lift by the usual staples we’ve come to expect from the Aardman brand: colorful graphics, endearing characters, and heaping mounds of visual and verbal wit (I especially liked how baby alligators were employed as clothespins, while the film’s version of “instant replay” is nothing short of genius). Hiddleston is hilarious as he provides Nooth with an over-the-top French accent, and that’s director and co-writer Nick Park providing the grunts of Hognob, Dug’s pet boar.

Blu-ray extras include a featurette on the genesis of the film; an interview with Park; a look at the building of the model sets; and a behind-the-scenes peek at the Aardman factory. 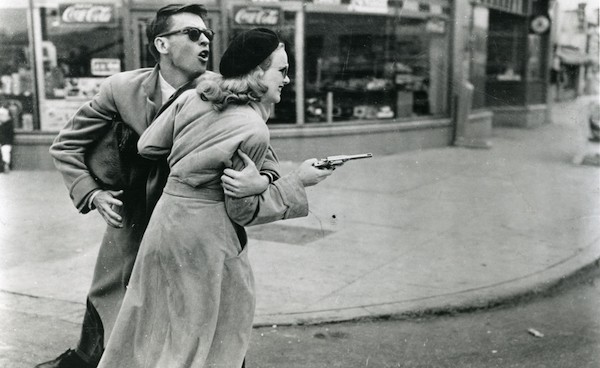 GUN CRAZY (1949). A seminal film noir as well as a cinematic primer for 1967’s Bonnie and Clyde, Gun Crazy owes its success to all of its primary architects: director Joseph H. Lewis, scripter MacKinlay Cantor (adapting his own short story), co-writer Dalton Trumbo (blacklisted at the time, meaning his “front” Millard Kaufman received screen credit), and stars John Dall and Peggy Cummins. Bart Tare (Dall) is the one who’s gun crazy — while he’s so sensitive that he won’t even kill animals for sport, he nevertheless only feels important when he’s holding a revolver or rifle. On the other hand, Annie Laurie Starr (Cumming) is crazy, period — or at least in those moments when matters become stressful and she begins sadistically shooting at anything that moves. The two meet at a carnival, and the sexual tension is evident from the start — eventually, they marry, but tough times result in Annie convincing Bart that they should rob banks together. In his book Alternate Oscars, Danny Peary asserts that the 1949 Best Picture Academy Award should have gone to Gun Crazy – while it’s tough to definitively make that claim in a year that also witnessed the likes of The Fallen Idol, The Heiress and Twelve O’Clock High, it certainly remains one of the more notable achievements of that 12-month stretch. Dall (Rope) and Cummings (Curse of the Demon) are excellent as the lovers on the lam, with Lewis and his writers steadily building a tragedy that can only end one way — and, between the visual innovation and the narrative irony, what a way! 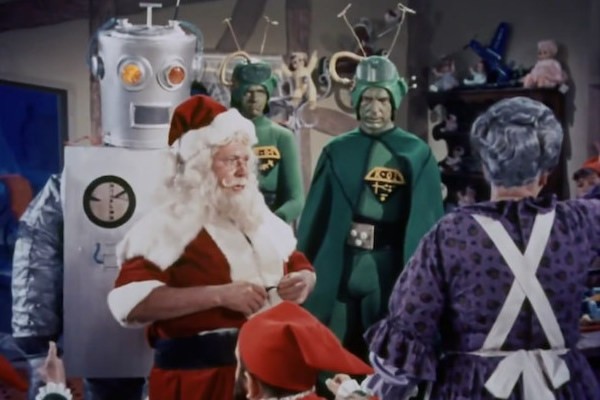 MYSTERY SCIENCE THEATER 3000: THE SINGLES COLLECTION (2018). Shout! Factory doubtless won’t be releasing any new sets of vintage MST3K episodes (see the reason why in this review of Volume XXXIX), but they are continuing to offer new editions of the volumes previously packaged by the Rhino label in earlier years. This gathering is comprised of five episodes (all from the Joel Hodgson Era) that were released as stand-alones and never as part of numbered sets.

The Crawling Hand (movie made in 1963; featured on MST3K in 1989) hails from the largely lamentable first season when there were frequently more dead spots than laughs (plus, J. Elvis Weinstein as Dr. Earhardt), meaning that the less said about it, the better. The Hellcats (movie made in 1968; featured on MST3K in 1990) is a better bet, as Joel, Crow and Tom Servo throw witticisms at a particularly dreary biker flick. Yet it’s the presence of the other three films that elevates this set, as all are legendary turkeys whose stinky statuses were known among bad-movie buffs even before this series came along. All three deserve nothing less than exemplary ribbing from the Satellite of Love crew, and Joel and the bots don’t disappoint.

The immortal Santa Claus Conquers the Martians (movie made in 1964; featured on MST3K in 1991) concerns itself with the well-meaning but ill-advised scheme by the Martian rulers to kidnap our Santa Claus and make him cheer up the sad little children on the Red Planet (one moppet is played by a 9-year-old Pia Zadora). The equally infamous Eegah (movie made in 1962; featured on MST3K in 1993) focuses on the discovery of a prehistoric caveman (Richard Kiel, later Jaws in a pair of James Bond entries) still living in the California hills. And I Accuse My Parents (movie made in 1944; featured on MST3K in 1993) finds a twit on trial for murder and deciding that it’s all the fault of his neglectful parents. These three grade-Z productions are amusing enough to watch without additional commentary, but the quips from Joel et al make them even more irresistible.

This DVD set also contains a compendium of shorts to go along with the five features. Extras include new episode intros by Hodgson; featurettes on directors Sam Newfield (I Accuse My Parents) and Herbert L. Strock (The Crawling Hand); and theatrical trailers.

OF UNKNOWN ORIGIN (1983). Maybe Of Unknown Origin would have fared better had it emerged in the 1970s, when moviegoers were checking out such rat-infested flicks as Willard, Ben, The Food of the Gods, and The Rats Are Coming! The Werewolves Are Here! But Chauncey G. Parker III didn’t write his novel The Visitor until 1981, and when this adaptation hit theaters in 1983, it proved to be a box office flop. Of course, the vague title, the vague poster, and the somewhat vague trailer (which made it look like a cross between The Exorcist, The Sentinel and an alien-invasion flick) probably didn’t entice viewers to come check out what’s ultimately a grudge match between a man and a rodent. A pre-RoboCop Peter Weller plays Bart Hughes, a hard-working businessman who takes particular pride in the fact that he renovated his Manhattan townhouse with his own hands. He stays behind while his wife (Shannon Tweed) and son go visit relatives in another city — hoping to make headway on an important job assignment, he’s instead distracted by the rat that’s wreaking havoc on his home. And this isn’t any ordinary rat — instead, it’s a super-rat, smart enough to chew up checks made out to exterminators and strong enough to go all Jason Voorhees on an unsuspecting kitty. What’s fascinating about Of Unknown Origin is not knowing whether director George P. Cosmatos and screenwriter Brian Taggert meant to make a drama or a comedy — the movie is seemingly played straight, yet so many elements (including Bart’s on-again, off-again descent into madness) sport a certain degree of kitsch that it’s impossible to take seriously. Ultimately, it’s flawed yet fascinating. 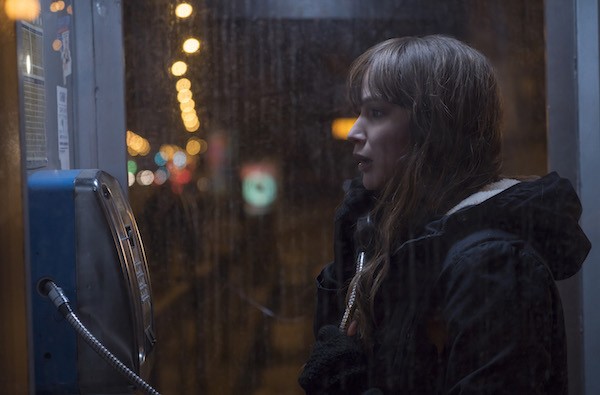 RED SPARROW (2018). Reuniting with director Francis Lawrence (he of the three Hunger Games sequels), Jennifer Lawrence stars as Dominika Egorova, a Russian ballerina whose career ends abruptly following a mishap during a performance. Dominika reluctantly accepts the aid of her uncle Ivan (Matthias Schoenaerts), a mid-level government official who’s convinced that she has the making of a first-rate spy. Ivan sends his niece to an academy that trains its agents to give themselves completely to whatever ugly task is on hand, usually of a sexually deviant nature (a “whore school,” as Dominika calls the joint). Dominika is soon given her first assignment, and CIA agent Nate Nash (Joel Edgerton) is certain he can turn her into an American asset. This adaptation of Jason Matthews’ novel (with Justin Haythe handing scripting duties) is awfully turgid, with a plot that never builds much momentum and zero chemistry between Lawrence and Edgerton. Indeed, the entire endeavor plays out with even less believability than any given Spy vs. Spy cartoon from MAD’s golden age. And whereas a superior espionage caper (Atomic Blonde, for starters) chooses to wear its danger on its sleeve, this one is content to merely shove it into its jockstrap. In short, this is an ugly movie that thinks nothing of repeatedly placing its female characters in degrading positions, and it’s hard to feel like a movie is striking a blow against misogyny when its camera leers as obsessively and as attentively as a virginal frat boy at a strip club. Of course, our heroine gets her revenge on (most of) her abusers, but it’s hardly compensation for the nastiness doled out over the majority of this picture’s punishing 140-minute run time.

THE RETURN OF SWAMP THING (1989). There are bad movies like the aforementioned Red Sparrow – unpleasant, uninspired, and largely unwatchable – and then there are bad movies like The Return of Swamp Thing — oafish, innocent, and almost adorable in their ineptitude. (In short, always rent this type of poor picture over that type of poor picture.) A follow-up to 1982’s Swamp Thing (reviewed here), this campfest rarely approaches anything resembling quality, and yet its general bungling is part of its charm. Louis Jourdan, whose mad-scientist character was turned into a monster and perished at the end of the first flick, nevertheless returns, not only alive but back in human form. He’s continuing to create Dr. Moreau-like mutations in his laboratory, and he believes his naïve stepdaughter Abby (Heather Locklear) would make a perfect test subject. Enter Swamp Thing (Dick Durock), whose constant rescuing of Abby results in her falling in love with our mossy hero (she believes the relationship can work because, as she chirps, “I’m a vegetarian!”). If nothing else, The Return of Swamp Thing deserves credit for featuring one of the all-time worst child performances in film history, that of Daniel Taylor as pudgy Darryl. Other elements are easier to take (if not much more polished), and some of the monster makeup designs work in spurts. Thanks to the participation of Jourdan, expect a verbal nod in the direction of Gigi, and thanks to the presence of Locklear, listen out for quips involving T.J. Hooker and Motley Crue.

THE CROW (1994). This adaptation of James O'Barr's comic book often plays like Death Wish for the MTV generation. Brandon Lee, tragically killed on-set while making this movie in Wilmington, stars as Eric Draven, a musician who, exactly a year after his death, returns from the grave to take his revenge on the punks responsible for his murder as well as the rape and murder of his fiancée (Sofia Shinas). As he metes out his bloody justice, he discovers that he must also deal with the city's reigning crime lord, a vicious character named Top Dollar (Michael Wincott). Director Alex Proyas went on to helm Dark City, I, Robot and Knowing, but none of them benefitted from his background as a music-video director quite like this particular picture did with its slick visuals, edgy atmospherics, and superb, chart-topping soundtrack that included both new tunes and covers by the likes of The Cure, Rage Against the Machine, Stone Temple Pilots and Nine Inch Nails. Yet despite its hardcore demeanor, there's also a surprisingly sensitive streak weaving throughout the film, a haunting melancholy as we note that Eric's foremost emotion is not hatred for his killers but love for his slain girlfriend. Lee brings a delicate, almost balletic quality to his otherwise steely performance, and while it's undeniable that his senseless death lends the finished product an eerie aura, it shouldn't obscure the fact that his work here is, on its own merits, wholly satisfying. (Hulu)