Keepin' it real about sex

"It can educate people how not to cat call, or abuse women's — or anyone's — rights," he adds, "it can have a snowball effect."

Longmire stresses that performances of The S.E.X. Show, which run through December, are good, if not quite squeaky clean, fun.

"It's a variety show, so [audiences] will experience all arts forms. We have comedians, exotic dancers, ballet dancers, poets, sex educators and body art. Audience members can consent to be painted. We have sing-alongs where our DJ plays 1990s R&B. It's all very interactive."

To help foster the communal sexy vibe, Longmire tells the audience that they are in a judgment-free zone where everyone is welcome.

"[The audience] mingle and talk to each other and hang out. At a certain point you forget how divided Charlotte can be because everyone is enjoying the show together. It's just a melting pot."

So how did a nice boy from Charlotte become a sexual master of ceremonies?

"I've always been a writer.'" Longmire says. "Any time people asked for it, I'd give them a story."

After graduating from Jay M. Robinson High School in Concord, Longmire attended Central Piedmont Community College. There he started dating a young poet and decided to accompany her to a poetry slam to show support. At his very first slam, he was hooked, Longmire remembers.

He started participating in youth slams. From there, it was a short but challenging step to poetry night at the now shuttered Wine Up in NoDa. Longmire met the host, JC the Poet, who Longmire calls the godfather of poetry in Charlotte. 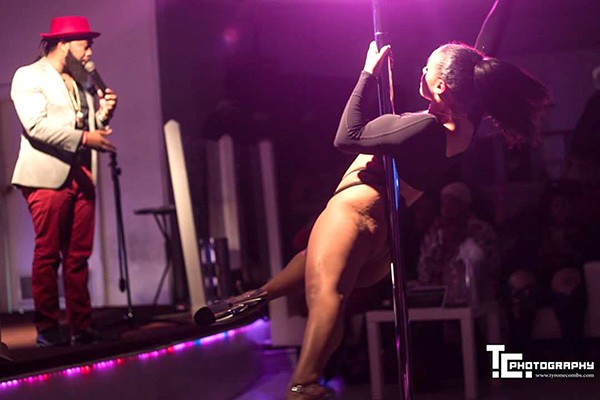 "JC threw me up there onstage into the deep end," Longmire says. "I messed up, forgot my poem, [and] just started free styling. I got offstage. He said, 'Yo, you have potential. You are going to be a beast. Come back every Thursday.'"

"[Maze] said that every poet has his learning curve where they find their voice," Longmire remembers, "and when you find your voice that's when you become who you are meant to be."

Longmire spent two years performing poetry around Charlotte, building his fan base and establishing his brand. In 2013, he moved to New York City.

"Living in New York, I experienced culture shock. So when I met someone I would get them to [tell me] their story, and I would put it into poetry."

Longmire's strategy for adjusting to his urban environment resulted in The Real One, his first published book of poetry. That 2015 collection contained political poems and love poems, as well as the stories that Longmire collected and turned into poems. He was still finding his voice. Then he published his second book, When Moons Cry, a spiritual journey that championed women's rights.

"The metaphor for When Moons Cry is when women get so fed up with this negative reality, they begin to wail and cry," Longmire explains. "Those tears can heal humanity."

Longmire's latest book came out last year. The One Who Brought Forth Day is a collection of inspirational poems designed to uplift people and help them overcome their trials and tribulations, Longmire says. The title is based on scripture: "Joy cometh in the morning."

Based on this volume Longmire has been nominated Author of the Year for the 2017 Queen City Awards. He's also a nominee this year for the Poetry in Motion Award, an honor he won last year. The award ceremony will be held at Oasis Shriners Auditorium at 604 Doug Mayes Place in Charlotte.

Having found his voice and his métier, Longmire moved back to Charlotte last March and launched the S.E.X. show, and his vocation as Sexy Lifestyle Brand Ambassador.

"When I was in New York, I just got into style. I'm addicted to dressing up. The perfect example is how they dress in the movie Kingsman. That's me 24-7."

"What that means is that under my brand I have culinary items, chefs, fitness experts, life coaches, poets and painters," Longmire says, all of which contributes to living consciously with a personal style and a sense of responsibility.

AIDS awareness is frequently promoted, with free onsite testing available at some of the shows, Longmire says.

"Being around them brings me fulfillment," he says. "I'm never going to be one of those artists that stays backstage the whole time until I go onstage. Instead, I'm seating people, ushering them to their seats, and taking photos. We're like a family."