BAD BOYS II (2003). The 1995 hit Bad Boys has been available on Blu-ray since 2010, but its sequel is just now making it to the format in an edition that pairs it with its predecessor. The original is nothing special, but it looks like The Maltese Falcon when compared to its execrable follow-up, which managed to make my list of the 10 Worst Films of the 2000s. It's the sort of movie that would lead a reactionary critic to condemn it as a work that marks The End Of Western Civilization As We Know It. I won't go that far, but I will state that it's quite possible I have never before seen a motion picture that held so much contempt for everyone and everything — for its audience, for its characters, even for the film medium itself. Will Smith and Martin Lawrence again star as Miami cops Mike Lowrey and Marcus Burnett, hot on the trail of a Cuban thug (terrible Jordi Molla) who's angling to become the city's number one supplier of Ecstasy. The first words uttered in the movie are "Stupid bitches," and that sets the tone for a film that wallows in mean-spirited misogyny, tiresome gay panic and predictable xenophobia. Anal intercourse seems to be prominent on the minds of director Michael Bay and the writers, and, for added hilarity, don't miss the loving close-up of two rats (yes, rats) screwing in the missionary position. ("They fuck just like us!" exclaims an excited Marcus.) Smith and Lawrence aren't the problem here: Their incessant bickering gets tiresome, but both have charisma to burn. But on second thought, maybe they are the problem: If they'd both been conscientious enough to turn down their hefty paychecks, then we wouldn't be burdened with this debacle of wretched excess.

Blu-ray extras include deleted scenes and the music video for Jay Z's "La-la-la." 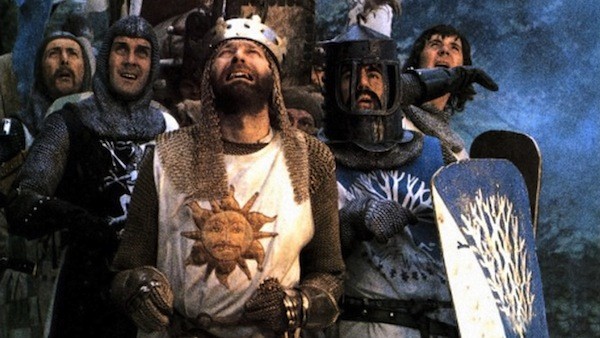 MONTY PYTHON AND THE HOLY GRAIL (1975). Already a worldwide sensation thanks to their BBC series Monty Python's Flying Circus (1969-1974), the Monty Python troupe — Graham Chapman, John Cleese, Terry Gilliam, Eric Idle, Terry Jones and Michael Palin — next tried their hand at cinema, with two of the resultant films eventually achieving cult status as well as routine mentions on various publications' "all-time best comedies" lists. One is 1979's Life of Brian (my pick as their finest film); the other is this deranged send-up of medieval tales, specifically the legend of King Arthur and the Knights of the Round Table. There's a semblance of a plot — Arthur (Chapman) and his knights must, you guessed it, find the Holy Grail — but this is really just an excuse for the boys to engage in their unique brand of humor, which includes mimicry, dress-up, dry wit, slapstick and glorious non sequitors. The classic bits are numerous: Arthur's gruesome battle with the Black Knight (Cleese); Lancelot (Cleese again) slaughtering everyone who gets in his way as he attempts to rescue a damsel in distress; the Knights Who Say "Ni"; the "three questions" at the Gorge of Eternal Peril; the killer rabbit (hilarious); and many other vignettes which fans know by heart.

The 40th Anniversary Blu-ray Edition contains only one new bonus feature, with the rest ported over from the 2012 Blu-ray. The newbie is a 2015 Q&A session with the Python members (except, of course, Chapman, who passed away from cancer back in 1989), moderated by John Oliver. Carry-over extras include audio commentary by Gilliam and Jones; separate audio commentary by Cleese, Idle and Palin; extended scenes; the "educational" short How to Use Your Coconuts; select scenes in Japanese (including one revealing that "the Holy Grail" became "the Holy Sake Cup"); and sing-alongs. 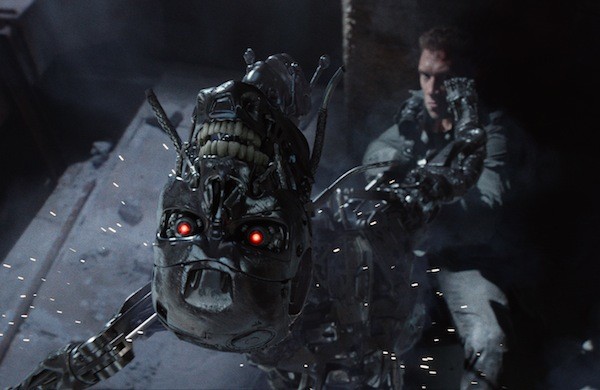 TERMINATOR GENISYS (2015). It's a toss-up as to what reigns as the most risible element in Terminator Genisys, the fifth — and flimsiest — film in the deathless series. There's the out-of-left-field reason given as to why the Terminator played by Arnold Schwarzenegger no longer looks like the young(ish) cyborg from past pictures but instead looks like a refugee from a Miami nursing home. There's the fact that Arnie's Terminator, a character that in past incarnations inspired fear and awe, is now called the decidedly nonthreatening "Pops" by those around him. There's the casting of Game of Thrones' Emilia Clarke as Sarah Connor, whose chirpy demeanor makes this often feel like Teen Beach Terminator. And then there's the mere sight of Jai Courtney once again attempting to act. The movie exists for no other reason than to line studio coffers, which of course is the raison d'être of many an unnecessary sequel. But a film can be an unwanted follow-up and manage not to destroy everything that preceded it through its addition of daft new wrinkles to the story frame. Equally detrimental is the obvious miscasting in most of the key roles, with the biggest error arriving in the selection of Clarke. Linda Hamilton was perfect as the original Sarah Connor, and we could easily believe this woman tossing off the shackles of her meek demeanor and crippling insecurities and emerging as a formidable soldier. By contrast, Clarke comes off as a girl playing grown-up, and when she utters an iconic line like, "Come with me if you want to live," it's like watching a Saved By the Bell cast member tackling a school play. Clearly, in both its casting and its storyline, Terminator Genisys resembles nothing so much as a baby downing palatable food and regurgitating it as a lumpy, smelly mess.

Blu-ray extras consist of a featurette on casting the characters; a piece on the location shooting; and a look at the visual effects. 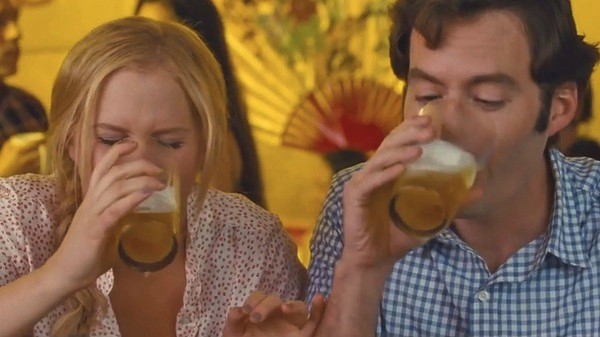 TRAINWRECK (2015). Like select other films directed by Judd Apatow, this summer hit could stand being 10 or 15 minutes shorter — its length is particularly felt toward the end, when it begins to feel like it's going to be dragged out as interminably as a Peter Jackson Middle-earth saga. But any last-act hemming and hawing is easily negated by the majority of the picture, which serves as the cinematic coming-out party for stand-up comedian and TV star Amy Schumer. Schumer (who also scripted) stars as a young woman named (natch) Amy, who as a child was told by her horndog dad (Colin Quinn) that monogamy is an impossibility. Embracing her father's dubious wisdom, she has spent her adult life committed to a series of one-night stands, and when she's not drinking or boffing, she's found working at a sleazy rag called S'Nuff, the sort that offers articles like "Ugliest Celebrity Kids" and "You Call Those Tits?" It's a story assignment for S'Nuff that leads to her meeting sports doctor Aaron Conners (Bill Hader) — they hit it off, and for the first time, she's forced to question her dad's outlook on life and love. Like all Apatow efforts, Trainwreck offers a mix of the silly and the sincere, with most of the best comic bits packed into the first half. The second part turns more serious and, consequently, more familiar, which is largely why its length begins to make its presence known. But Schumer is terrific throughout, as adept in her dramatic scenes opposite Brie Larson (a calming presence as her sensible sibling) as when flashing her sizable comedic chops.

The Blu-ray contains both the R-rated theatrical version and an unrated cut that runs approximately four minutes longer. Extras include audio commentary by Schumer, Apatow and associate producer Kim Caramele; a behind-the-scenes featurette; deleted scenes; a gag reel; and the red band trailer.

With Christmas just around the corner — well, not really, but the majority of Americans like to believe it is — here's a peek at some new TV box sets that might possibly make great presents for the binge-watchers in your family.