by Mark Kemp and Ryan Pitkin

"I feel like 90 percent of the bands people compare us to, I've either never heard of or we don't like," said Audrey Ayers, guitarist for the local indie rock band.

Ayers' fellow guitarist and vocalist in the band, Brett Green, said he hears Superchunk most often, a comparison that we agree doesn't even come close to describing The Mineral Girls, scheduled to play at The Milestone on February 28.

However, at least Green respects Superchunk, which is more than he can say for Smashing Pumpkins.

"I don't like Smashing Pumpkins and fuck Billy Corgan," is Green's quick response to the suggestion that his voice can "hover in Billy Corgan Land" every once in a while. Green's laughing, though, because after all, he's not an asshole — like, say, Billy Corgan, whom Green met once while working at Lunchbox Records.

As Green remembers it, Corgan was checking out with "whoever the token female bassist of Smashing Pumpkins was at the time" when Green mentioned he didn't know the Pumpkins were in town.

"He got fucking furious," recalled Green. "He was like, 'See, this is the demographic we're trying to reach and he doesn't even know we're playing in town.' I was like, 'Dude, I wouldn't have come anyway.' He could have been like 'Hey, do you want to come for free?' and I'd have been like, 'Nah, dude, sorry.'"

We met Green and Ayers at La Unica in Charlotte, where each ordered their own personal queso before questioning their own decision making.

"We totally could have just shared one," the two said almost simultaneously as they looked down at their respective bowls of melted cheese.

Ayers and Green joked back and forth with each other about bands they disagree on (Green just laughed when Ayers admitted she's a fan of Smashing Pumpkins' Siamese Dream but still hates Corgan). 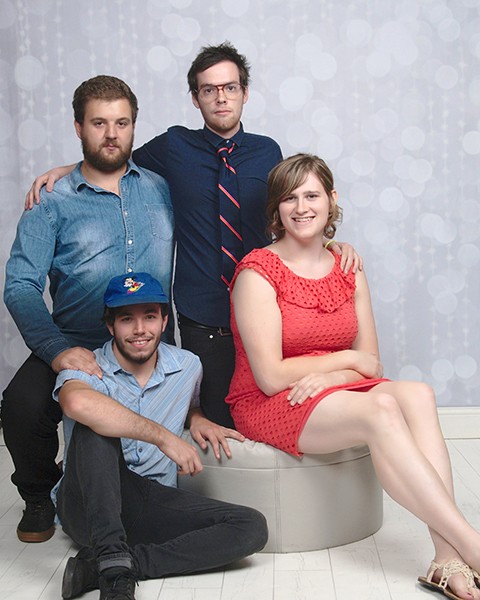 Between jokes, though, we were able to get some info out of them about the band's release from last October, This Is The Last Time Every Time, and how its hard-hitting lyrics were basically written on the spot.

Creative Loafing: TITLTET has a different feel than your past releases. Would you agree?

Audrey Ayers: It feels like a rollercoaster. It's honestly just completely downhill. There's no dips and dives or time to catch your breath, I think.

Brett Green: The process for writing the lyrics was different. With the other records I would write songs beforehand and we would play them together for a long time before we recorded it. For this one we just wrote all the music and I essentially didn't have any lyrics until three days beforehand. I just unloaded everything I had been thinking about for the last couple months — notes from my phone and stuff I pulled off of my Twitter.

So the lyrics are a step away from improvised?

Ayers: The vocal melodies were essentially improvised, too. 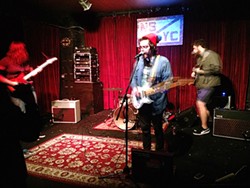 Green: We wrote stuff where we're just playing it. We took a different approach with it, like, "Let's write the songs and let's play guitar, and let's do all this before I think about the lyrics." I think a lot of the lyrics ended up being cool because they're just very last minute stream of consciousness lyrics.

The first couple of shows we played after this record came out, I had to look at the lyrics beforehand. I was like, "I don't know what I'm doing." I had to listen to the melody and be like, "What was I doing?" because I had just made it up.

In one song, Brett, you say you're "in love with everyone and terrified of everything." Is that true?

Green: Yeah, in a way. I'll think about stuff and everything is scary.

Ayers: I feel like that emotion expressed there is the two extremes. Maybe it's not 100 percent accurate, but how I've always interpreted that — and I didn't write it — but the way I read that is like, expressing those extreme emotions. Almost like you're feeling manic in a way.

Green: I wouldn't say I'm in love with everyone, but I want everyone to love me so I put in a certain amount of effort. Even if I don't like people I'm like, "Man I really hope that person likes me." [laughs] 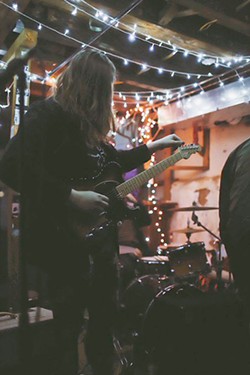 That reminds me of something you said on our 'Local Vibes' podcast, Audrey, along the lines that you were afraid to go out sometimes, not so much because of people out there but your own insecurities.

Ayers: Right. Another thing I think is, from what I know of [Brett], I think you do genuinely, deep down, wish the best for people as a whole. I think you want humanity to be better than it is.

Green: Absolutely. I do find most people annoying [laughs] but I'm exposed to a lot of really annoying people. Literally everything about being a person is scary if you focus on it. Like, if you leave your house you could get hurt in so many ways.

Sort of the Buddhist notion of "life is misery."

Green: Yeah, it's a weird thing to have to deal with.

Ayers: I always thought a lot of those lyrics are about co-dependence, and I don't know if that was intentional.

Green: Some of it, yeah.

On one song in particular, "Let's Take Medicine," you go into some really harsh, serious stuff. Does that come out of your experience?

Green: There's nothing on that record that's not autobiographical. With processing anything, sometimes you just need to say it out loud. It's definitely something that affected me deeply but not something that ruined me.

Ayers: In the first section [of that song], I've dealt with a lot of that, and the night before we went to the studio, you sent us a picture of the lyrics you were writing, and when I read that song I cried. I was like "Holy shit, dude."

Green: I think that's the coolest part about that, is it's like the catchiest melody on the entire record. It sounds so fun. Every time I sing it at a show, I bop a little bit and then I'm like, "Wait a second, this is so heavy."

Ayers: It's almost sing-songy the way you sing it — especially live because you always switch it up a little bit.

The pair of title tracks is great, but on the second one, is that a computerized voice or Audrey's voice? It sounds like a robot, but it sounds like it has emotion.

Green: It's computerized. I downloaded a text-to-speech app and it had 30 different options for voices and you can slow them down or speed it up. Originally when we did it, I was just going to talk that part, but over the course of us talking about it, we came up with the idea of it becoming a robot. The character is Voice of God.

We typed it out, we cut it up to where it was timed right, and then the guy who was engineering the album, our friend Kris Hilbert at Legit Biz [Legitimate Business recording studio] in Greensboro was like, "Wait a minute, I can adjust the pitch on this." So he made it sing along and it was the craziest thing. I was laughing so hard.

The album kicks into a new gear after that.

Ayers: And that's the same voice that starts and ends the record, too.

Green: He says "Let's talk about us," then he says, "I am cry tears motherfucker." I can't even remember what the point of that was.

How did you two get into music?

Green: My dad's stepdad gave guitar lessons and he always wanted to make me play guitar. He gave me a guitar right before we moved. And I got so bored from not having any friends after I moved here, that I ended up learning how to play guitar.

Ayers: I picked up guitar when I was in middle school and I really wanted to learn the riff to "I Caught Fire" by The Used. So I spent like two weeks and I did that. And after that, I started messing around with it and trying to make my own stuff.

I started writing songs and then eventually, I really wanted to make music with other people but there wasn't anyone in my hometown [in upstate New York]. There pretty much wasn't anyone who played, let alone anyone who played what I played. So I downloaded a program called Guitar Pro and I wrote songs and I wrote every instrument. That's what I did before I joined this band, pretty much. I wrote drums, I wrote bass, everything. I can't play them for shit, but I tried. This is the first band I've been in.

And how did that come about?

Green: Audrey joined [Mineral Girls] when we were writing the second record. She was there at a practice once. Our bassist, Dylan, joined the band because I was recording some of his songs at my house and I said, "Hey, we need a bassist," and he was there that day. The same thing happened with Audrey. We were writing a song and I had been recording her songs at my house and she was playing guitar and I was like, "Alright, I guess you can be in this band."

And was it Mineral Girls from there on out?

Green: The name was a result of a wordplay game. It was after I left this one band I was in called It Looks Sad., which was the band I started and then got kicked out of. [laughs] I was playing solo sets and I just started having my friends play with me, and we would be Brett Green and the Whatever — we would just make up the name that night. Brett Green and the Front Flip Buttons was one, I don't know what that means.

And then there was one day when we were writing the very first EP and we had a show to play. We just got really stoned and we were saying words back and forth at each other — words that sounded the same or something — and then Mineral Girls was the one that ended up being the band name. It was Brett Green and the Mineral Girls for like two shows, and then it was just Mineral Girls.