'Miles & Coltrane' Springs Back to Life How unconventional? Well, for one thing, you won't see the actors who portray Miles Davis and John Coltrane — the trumpeter and saxophonist who revolutionized jazz — play a single note in On Q Performing Arts' production of Miles & Coltrane: Blue (.).

Talley, the founder of On Q who directs the play and portrays Coltrane, explains how he and Sultan Omar El-Amin, the actor portraying Davis, handle the production's frequent musical interludes.

"Omar and I don't even have our instruments in hand [when Miles and Coltrane play]," Talley says. "When we finish a monologue or a scene, a trumpet player and a saxophone player will take our positions onstage, and then they will front a full band."

The top-notch players recruited by music director Stephen Gordon for the production, which runs March 22 through April 1 at Duke Energy Theater, is a sign of Talley's deep respect for Coltrane, Davis and their music. Trumpeter Eleazar Shafer's hip-hop-infused bop style has turned critics' ears in his hometown of New York City. Saxophone is split between two Charlotteans: Adrian Crutchfield, former reedman for Prince, will handle sax duties for the first week of the show's run, and Phillip Whack takes over for the second.

"We let the professionals handle the music," Talley says with a deep chuckle.

It's been 26 years since Davis' death, and a half-century since Coltrane's. But Talley insists the men and the music they crafted remain relevant. Davis' Kind of Blue album, recorded with Coltrane on sax, is arguably the best-selling jazz disc ever. 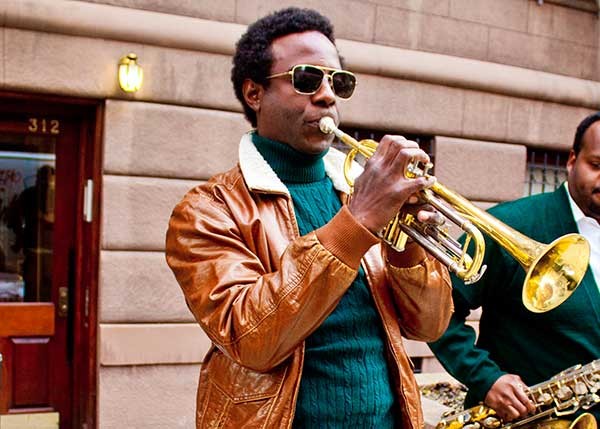 "Their music is the blueprint for a lot of what you hear today," Talley says. "They influenced every genre."

The lives of Davis and Coltrane also carry social implications that resonate with modern audiences. "Both Miles and Coltrane were navigating being black in America — what that meant at that time and what it means today," Talley says. "Davis demanded to be treated just like everybody else. In 1956 he was a black man driving a yellow Ferrari in New York City. That's a social statement just by itself."

So is Miles & Coltrane: Blue (.), which is less a play than a poetic and musical rumination on creativity and its human costs. "It's part performance poetry, part traditional theater with monologues and dialogue, and part concert," Talley says. "The band goes from playing a full-blown concert to dropping out to the background like a film score, while myself, a narrator, and Omar as Miles are talking. The music never stops."

On Q premiered Miles & Coltrane: Blue (.) in Charlotte in 2008. It has since toured, crossing the Atlantic for two stints at Edinburgh's Fringe Festival — a 2009 run with a truncated cast, and a full staging in 2013. But the current production, which marks On Q's 10th anniversary, is by far the most ambitious remounting of a show that's close to Talley's heart. 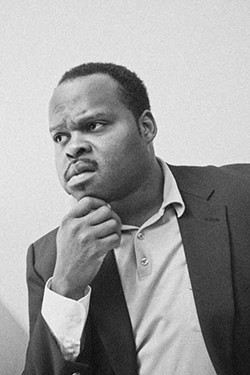 "It's our signature piece," Talley says. "It's a Charlotte-arts-community-born-and-bred production, from musicians to writers to performers. From the ground up, it's a Charlotte show."

The production is a proven crowd pleaser, Talley adds. "We've tested it with critics and audiences, and they like it. So now we're doing our remounted show with a new set and some other goodies."

The goal this time around, he says, is to up the production's commercial ante, and to prepare it for an off-Broadway run. Show business considerations aside, Miles & Coltrane also speaks to On Q's ability to create original work.

Along with classical and contemporary productions, "original performance work that reflects the black experience" has been a cornerstone of On Q's mission since the company was founded. "With our 10-year anniversary," Talley says, "we're celebrating the fact that we've been able to make an impact on the community."

Talley has been immersed in theater since childhood, producing his first original production at a community center in his hometown of Greenwood, S.C., while still in his teens.

"It was called Black and Blue," Talley remembers. "I took a excerpt from one of my favorite books, The Invisible Man by Ralph Ellison, and turned it into a stream-of-consciousness play."

At Winthrop University Talley was exposed to African American poets like Saul Williams and Staceyann Chin. Spoken word, open mics and poetry slams dovetailed neatly with his college theater work, but by the time he graduated from Winthrop in 2003 with a theater performance degree, Talley was burnt out on the stage.

A move to Charlotte rekindled his passion. Talley jumped into the city's spoken word poetry scene, and at the since-shuttered Afro American Cultural Center, he met his future Miles Davis — El-Amin. "Omar was working the front desk while I was doing theater and poetry there," Talley says. "We started talking."

"All the companies would do their one show in February for Black History Month, and that was it," Talley says. "The rest of the year, trained actors of color couldn't find work on a regular basis."

With few productions and fewer parts for actors of color, Talley tackled the issue head-on. In 2006, he launched On Q, Charlotte's first full-fledged African-American theater company, with a production of Suzan-Lori Parks' In The Blood at the Hart Witzen Gallery. Not long after that, the first inkling for Miles & Coltrane emerged.

"I was sitting on the back steps of the (now-defunct) Wine Up Lounge with a musician friend, Corey McClure," Talley remembers. He and McClure were talking about music, theater, Miles and Coltrane when McClure asked if there had ever been a theater piece devoted to the iconic jazzmen. Talley couldn't name a single show. 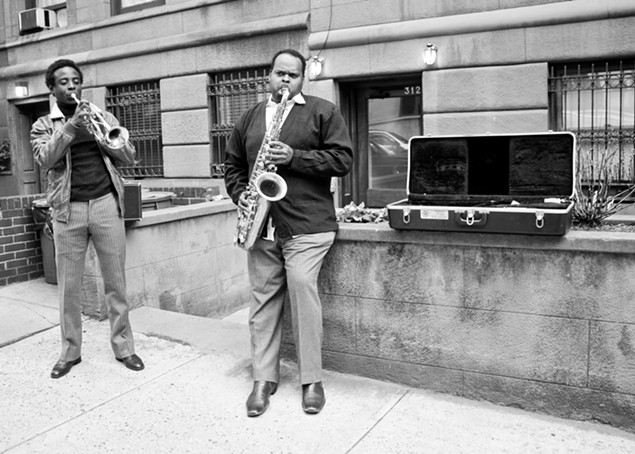 From its inception, Talley knew Miles & Coltrane had to include poetry with performance and music. He turned to his friends in Charlotte's spoken-word scene to craft a non-traditional theater piece that would riff and flow like jazz improvisation.

The script that emerged is credited not to any single writer, but to Concrete Generation, a collective of artists and poets.

"Mekkah wrote from the perspective of Coltrane's wife Alice," Talley says. "Alice locked John in the closet for several days so he could kick heroin." Maisha viewed Davis through the prism of the women in his life, particularly his first wife Frances Taylor.

"We got different perspectives from different writers but it all gelled together beautifully. It was like we were all in the same room writing," Talley says.

In the completed script, a portrait of two inspired-yet-contentious human beings emerges. There was never any intention to craft a burnished tribute to Davis and Coltrane, Talley maintains.

"We're portraying them as artists struggling to create," Talley says. "Who or what got in the way of creating? Who or what was their muse?"

[Editor's Note: The original version of this article mistakenly called the album Kind of Blue the "only" studio album Miles & Coltrane recorded together. It is the most successful, but not the only one.]