The family that smokes together ... 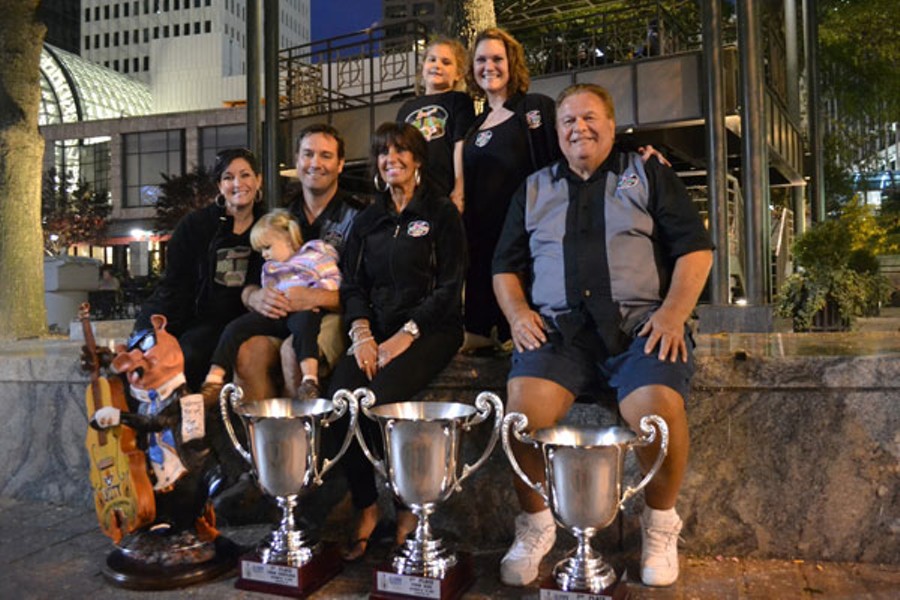 Based on appearances alone, one look at the Ranucci family and you might assume that they have the kind of pull that leaves others at the bottom of the ocean in a pair of concrete shoes. Or worse — that they are the next iteration of Jersey Shore-esque reality television.

There's Ed Ranucci, "The Dad," donning a black and gray bowling shirt over his boxy frame. He's a hulking figure of authority, wearing clean, white sneakers that add a stark contrast to his tan skin and dyed hair, which is always neatly slicked back. "Ma," Cathy Ranucci, is the classic vision of a New York Italian mother. (I know because these women populate my entire family as well as on my husband's side.) Cathy sports long jet-black hair accented with hula-hoop-sized earrings, a hard-earned bulb tan, frosted pink lipstick, well-manicured nails (duh!) and plenty of jingly bracelets and gaudy bling. Then there's "The Sister," Deana Ranucci. Take 20 years or so off Cathy Ranucci and you have Deana, right down to the earrings. Next is Alex, "The Son," a treasure among Italian families. (I know because my husband's mother reminds me of this every time we speak.) Alex is handsome, with dark hair and dark eyes. His wife, Zoe (pronounced Zoh) Ranucci is equally adorable, as are their two daughters, Giada and Mila.

The only thing more surprising than finding out that the Ranuccis are not affiliated with the mob nor are ringers for smut reality television is learning that they are the newly crowned Q-City Charlotte Barbecue Grand Champions for competition-style barbecue ribs. The Ranuccis own and operate Ranucci's Big Butt BBQ in Belmont, and these Italians know how to smoke a butt.

The Ranuccis stumbled into their unlikely family business nearly 10 years ago when Ed decided retirement was too boring. Lounging poolside and drinking beer in New York just wasn't enough to keep his interest, so he drew from his family's experience in the restaurant business and chose to go into catering. At the time, Ed's son Alex was exploring a burgeoning interest in backyard barbecue, cooking for friends on weekends and testing various dishes, rubs and sauces.

"One thing led to another and I bought a smoker on eBay," says Ed.

When Ed met Alex in North Carolina to pick up his smoker, he discovered his son had entered the two of them into a barbecue contest. "I'd never smoked anything in my life," Ed says. "I didn't even know how to use the thing."

The Ranuccis ended up taking first place in ribs, a win that catapulted the Ranucci men, competitive by nature, into the competition barbecue world. They signed up for more contests and eventually began competing in professional divisions, gaining a reputation for award-winning barbecue while honing their craft.

Alex and Ed, though living states apart, continued to perfect their recipes for dry rubs and the Ranucci signature barbecue sauce. Alex would email Ed a recipe; Ed would test it, make adjustments and send Alex another recipe with his twist added to it. Father and son spent at least three years going back and forth on the barbecue sauce.

"If he does something, I got to do it better," says Ed. "Actually, [Alex] always comes up with a better product."

The Ranuccis settled on a tomato-based sauce with molasses, brown sugar, chipotle and, get this, pureed mango. The result is a Western North Carolina style sauce that is not overpoweringly sweet and finishes clean with a little unobtrusive heat. Of course, the Ranuccis serve their sauce on the side because they believe the meat should speak for itself.

During the October competition in Uptown, the Ranuccis prepared a 155-pound pig for the whole hog category, smoked eight shoulders and made 15 racks of ribs. Last year, they took first place in ribs and whole hog, but the Grand Champion title eluded them, sometimes within tenths of a point.

As the family huddled on stage taking in the moment, the excitement and passion exuding offstage was endearing. The Ranuccis took home more than $10,000 in cash prizes, too.

As Alex so eloquently put it, the Ranuccis were "always a bridesmaid, never the bride." That October night, though, a win back in the city where it all started tasted as sweet as, well, good barbecue sauce.

Editor's Note: In the print edition, we incorrectly noted that the Ranucci family would go on to represent the Southeast region and compete in the World Barbecue Championship Category in Las Vegas. Although they did qualify, they will not be attending.