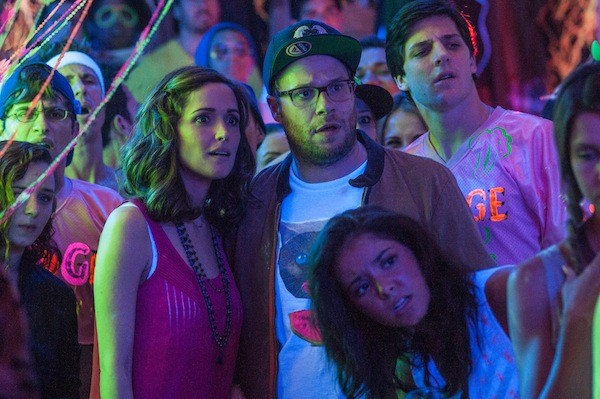 Like the beer at a college kegger, the comedy Neighbors flows smoothly for much of the time, only spurting and gasping in those moments when it's been tapped dry.

Seth Rogen, who has been paired on-screen with more beautiful women than any other affable slob this side of Kevin James, here gets to dally with Bridesmaids' Rose Byrne. They star as Mac and Kelly Radner, who aren't too thrilled when they learn that a group of fraternity brothers has moved into the house next door. Fearing that the potential noise will disturb their staid suburban lifestyle — and wake up their baby at all hours — they try to ingratiate themselves by offering the new kids on the block some weed as a welcome gesture. At first, it works: Frat leaders Teddy (Zac Efron) and Pete (Dave Franco) promise to behave, and Mac and Kelly even get invited over for a massive blowout that finds Mac eating mushrooms by the handful and getting into a conversation with Teddy over whether the definitive Batman was Michael Keaton or Christian Bale. But during one subsequent — and particular raucous — night, the Radners call the cops on the frat rats, a decision that results in an all-out war between the two households.

Neighbors offers a steady stream of satisfactory laughs, particular in the scenes which show Mac and Kelly desperately trying to hold onto their youthful vigor and carefree spirits even though they're now tied down with a baby and a mortgage. This interesting angle gets downsized over the course of the film, but there are a number of more visually dependent gags trying to take up the slack, including ones involving frat-manufactured dildos and milk-filled mammaries. Much of the ribald humor is inspired while some of it is merely desperate, but it's the sloppiness of the characterizations that weakens stretches of the film. Efron's Teddy is occasionally transformed into a borderline psychopath, but only when the inconsistent script requires it. Similarly, Rogen's Mac is savvy enough to know that "Hooah!" is Al Pacino's rallying cry in Scent of a Woman, yet he has no clue that "You talkin' to me?" is Robert De Niro's signature line in Taxi Driver? One gets the feeling that the dialogue was improvised as much as it was scripted (a staple in modern comedy), but it's probably because of this loose structure that the movie often feels flabby and disjointed. Still, as far as dum-dum comedies go, this one's not bad at all, and it's sure to go down even easier after a few rounds of shots or a pitcher or three at the neighborhood bar.