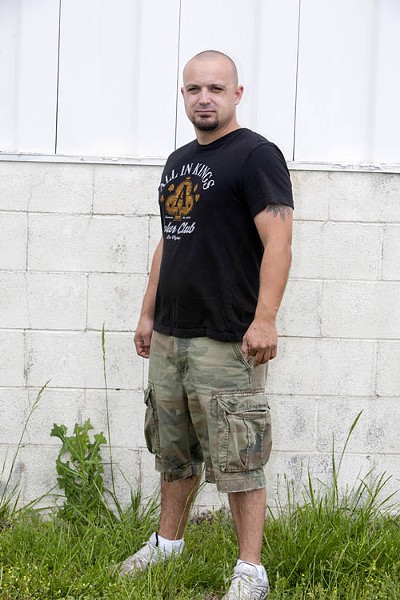 What do the repo man, the Park It! agent and the tow truck guy have in common? They each have the potential to make a driver's life hell. No one ever wants to see these three ... at least most of the time. Doing a job that makes the employee the bad guy isn't easy, but somebody has to do it. That said, how do they feel about sometimes being so ... reviled? We checked in with a few of Charlotte's top "Car Foes" and got the scoop.

The Repo Man: Brent Hulderman of Absolute Recovery prefers that people don't see him coming. As the man assigned with the task of retrieving a car, truck, motorcycle or boat that someone has stopped paying for, the last thing Hulderman wants is trouble — or to hear a sob story.

"When I do interact with people, they're usually shocked. They say: 'Oh, I did mail my payment. I'm not behind. I just talked to them today.' Then there are people who will try to jump in the car and drive away or stand in between my truck and their car so I can't take it. And then some people will say, 'I've been waiting for you to get here,'" said Hulderman, who has been in the recovery business for three years.

"People think of us as the bad guy and we're just doing a job that someone told us to do."

One thing Hulderman won't do is fight a car owner like the repo men on the reality TV show Operation Repo. "I'd go to jail if I fought someone in their front yard," he said, adding that the show is not representative of the reality of repossessing cars.

Sometimes, though, Hulderman has run into real danger — like the time he and his partner had just loaded a car on their truck and the owner ran outside with a gun. "He just came out of nowhere and basically, like a football tackle, tried to knock over my employee so that he could get to his car," he said. "As that was going on, we were able to drag the car away without him being able to get his car back."

The Tow Truck Driver: Being a tow truck driver means that half of the time, when people see you, they're mad because they've parked in a spot that was marked "No Parking." Ask anyone who's parked in Plaza Midwood in a lot that wasn't attached to the restaurant or club they were heading to; no one wants to see a tow truck lurking around. That is, until you need one.

Jeton Alexander, of Early Bird Towing and Trucking, said his days (from 3 a.m. to 11 p.m.) consist of answering calls from people who need their cars taken to a shop for repairs or helping someone broken down on the side of the road. And over the last two years, Alexander said he's saved quite a few people, but the weirdest call he's ever responded to was a man on the highway with no wheels.

"The man called me, and when I got there, he didn't have any tires on the car. And that was weird to me because ... I didn't know how to get it on the truck. I didn't want to drag it, and at that time, I didn't have dollies," Alexander said, adding that he had to wait for the driver to find four spare tires before the car could be moved. "He had run over something that burst the tires on his car. He jacked the car up on his own and removed the tires."

Park It!: Leaving your car next to green parking meters in Charlotte can be costly. Just let that meter expire while you're sipping coffee in Starbucks at the Gateway Center, and before you can say mocha latte, you're hit with a $25 citation. If that yellow envelope is on your windshield, then you probably overestimated how many quarters you dropped in the meter.

Meters are monitored from 7 a.m. to 6 p.m., Monday through Friday, except for most holidays. Park It! agents ride around town in little carts armed with their electronic ticket-writing guns. Dressed in blue jackets with big yellow letters on the back, no driver wants to see these guys and gals coming their way. (And not only do they issue tickets, but Park It! also has the authority to boot your car.) Creative Loafing wanted to speak with the folks at Park It! about what they do and what it's like to be (arguably) one of the most hated agencies in the city, but (surprise, surprise) our calls went unanswered.

Braking up is hard to do ... one year later
Meet the 'Car Foes'
It's electric (cars)
Listen while you (drive to) work