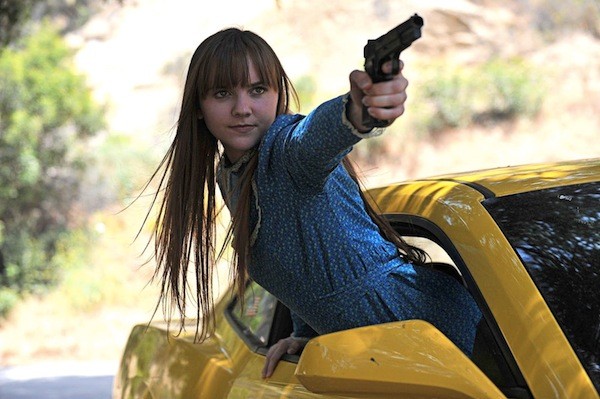 GOD BLESS AMERICA (2012). Oliver Stone's 1994 Natural Born Killers was a blistering indictment of how the media turns mass murderers into celebrities. God Bless America, the latest film from writer-director Bobcat Goldthwait, somewhat turns that premise on its head: Here, mass murderers go after the media, whose members have in this century become celebrities themselves. Joel Murray stars as Frank, a divorced office grunt who abhors the dumbing down of this nation. While his co-workers gather around the water cooler to excitedly gab about the most recent episode of American Superstarz (a "talent" show hosted by a Brit, a Latina and a black guy), he rails against the idiocy of reality shows, inflammatory TV commentators, and racist, homophobic mobs. Even his own daughter won't have anything to do with him, deeming him boring because his idea of a good time is a trip to the zoo or the park; she only calls him to shriek about hating her mom because she bought her a Blackberry instead of an iPhone. Frank decides to kill himself rather than live in such a world, but he soon changes his mind and instead goes after Chloe (Maddie Hasson), a 16-year-old beauty and the horrific, spoiled star of her own reality show. His actions are noted by teen misfit Roxy (Tara Lynne Barr), who quickly joins him in his murderous acts; soon, the pair are traveling across the country, blowing away Tea Party extremists, right-wing hatemongers (including a Glenn Beck-like host who scoffs at a mom who lost her son in combat), and reality-TV stars. Admittedly, God Bless America is simplistic in its views and goals, and there's something a bit disingenuous about this picture being made by a filmmaker whose claim to fame was appearing in such idiotic works as Police Academy 2: Their First Assignment, the talking-horse romp Hot to Trot and the notorious Shakes the Clown. But I'd be lying if I didn't admit that there's something cathartic about seeing funeral picketers and Rush Limbaugh clones receive their just desserts.

DVD extras include audio commentary by Goldthwait, Murray and Barr; a behind-the-scenes featurette; deleted and extended scenes; and a Roxy and Frank music video. 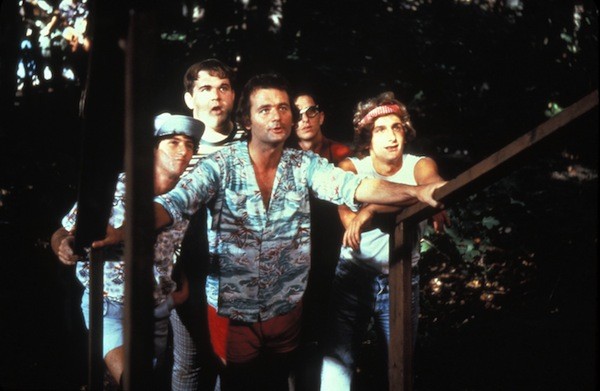 MEATBALLS (1979). Following the massive success of 1978's National Lampoon's Animal House, multiplexes were flooded with all manner of films hoping to capitalize on audience cravings for slob comedies and t&a efforts. Ivan Reitman, who produced Animal House, served as director and co-writer on Meatballs, and what's surprising about the picture is its lack of raunch. Instead, this PG effort boasts an unexpected sweetness as it follows the misadventures of the staff at Camp North Star. Tripper (Bill Murray in his feature starring debut) is the wild and crazy head counselor, wooing a fellow staffer (Kate Lynch), tormenting his superior (Harvey Atkin), and taking a lonely camper named Rudy (Chris Makepeace) under his wing. Except for the roly poly Fink (Keith Knight) and the aptly named Spaz (Jack Blum), none of the other counselors sport much in the way of personalities, but the scenes between Murray and Makepeace are nicely handled, and the lack of mean-spiritedness is refreshing. Incidentally, this was followed by three sequels made by other hands: Meatballs Part II, featuring Paul "Pee-wee Herman" in a supporting role; Meatballs III, in which a dead porn star (Sally Kellerman) tries to help Rudy (now played by Patrick Dempsey) score with a local hottie (Playboy model Shannon Tweed); and Meatballs 4, starring a post-15-minutes-of-80s-fame Corey Feldman.

Blu-ray extras consist of audio commentary by writer-director Ivan Reitman and writer-producer Dan Goldberg, and trailers for the awful trio of One for the Money, Killers and Employee of the Month (all perhaps included to make Meatballs look even better by comparison?). 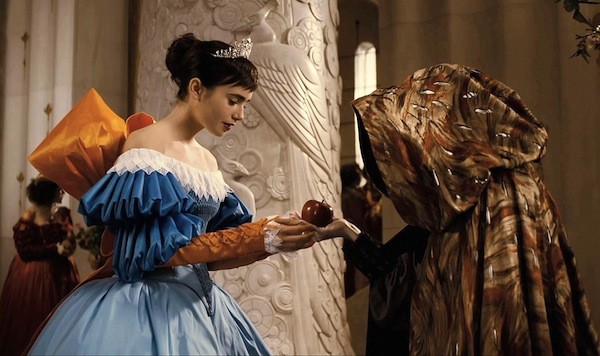 MIRROR MIRROR (2012). (2012). With the addition of a fearsome dragon and the sight of Nathan Lane turning into a cockroach, this clearly isn't your ancestor's Snow White. This is evident from the start, as the wicked Queen (Julia Roberts) explains in a snappish voice how she married a benevolent king and, after he disappeared, took control of his kingdom as well as his young daughter Snow White (Lily Collins). The Queen hopes to marry the wealthy Prince Alcott (Armie Hammer), but he's smitten with Snow, who has suddenly found herself hiding from the cruel despot in the nearby woods. There, she meets seven dwarfs, but don't expect miners with names like Sleepy, Bashful and Grumpy; these seven are bandits by trade, answering to monikers like Butcher, Wolf and Grub. The first of the year's two Snow White flicks (the other being, of course, the so-so Snow White and the Huntsman), Mirror Mirror follows the Shrek template of tweaking familiar children's chestnuts with contemporary cracks and characterizations, but while it's classier than that animated blockbuster (no potty humor here), it's also far more tepid, with precious few of the radical revisions displaying any real wit. The romance isn't any better: While Collins and Hammer look good together, they fail to strike any sparks. Roberts, meanwhile, is game but operating inside an undefined character. Is the Queen supposed to be a harmless nitwit? A frightening monarch? A caricature of regal insouciance? With director Tarsem Singh Dhandwar and his writers providing no direction, Roberts is cast adrift, only finding any grounding in her amusing scenes opposite Lane as her mincing manservant. As for the dwarfs, they prove to be an interesting lot, albeit not nearly as entertaining as their cartoon counterparts from Disney's 1938 classic. But it was probably best that they provided this septet with new names, considering this dull trifle forced me to co-opt the names Sleepy and Grumpy for the duration of its running time. 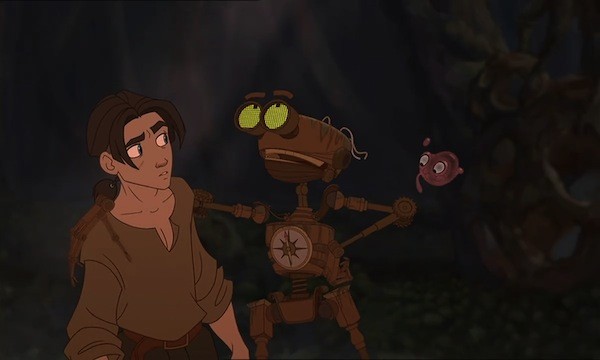 TREASURE PLANET (2012). (2002). During that dismal stretch when Disney's animation department largely lost it and produced almost nothing but duds, Treasure Planet turned out to be one of the more enjoyable outings - and, yeah, that just shows the depths to which the studio had plunged. This massive bomb ($38 million gross versus a staggering $140 million budget) adds a sci-fi twist to Robert Louis Stevenson's Treasure Island: Jim Hawkins is now a troubled teen into surfing across the skies, while pirate John Silver has been reconfigured as a cyborg. The animation is bright and the voice talents have been well-chosen (Emma Thompson as the heroic Captain Amelia, Roscoe Lee Browne as her distinguished second-in-command, and Michael Wincott as the villainous spider-critter Scroop are especially effective), yet when it comes to the comic relief, the studio set a new low for itself. The fussy Doctor Doppler (David Hyde Pierce) and a blob known as Morph are barely tolerable, but the late-inning addition of an insufferable robot named B.E.N. (Martin Short) cripples much of the film's momentum and renders many of the latter scenes unwatchable (a friend once dubbed B.E.N. "the Jar-Jar Binks of animation," and she was absolutely right). Treasure Planet was one of four mediocrities nominated for that year's Best Animated Feature Academy Award (the others being Ice Age, Spirit: Stallion of the Cimarron and fellow Disney stablemate Lilo & Stitch); luckily, all were beaten by the one masterpiece in the bunch, Hayao Miyazaki's Spirited Away.

Blu-ray extras include audio commentary by co-directors Ron Clements and John Musker and producer Roy Conli; deleted scenes; DisneyPedia: The Life of a Pirate Revealed; and the music video for "I'm Still Here" by John Rzeznik of The Goo Goo Dolls. 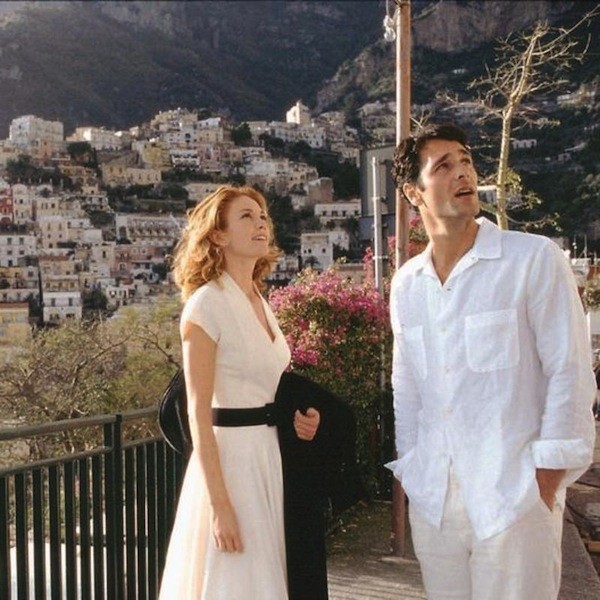 UNDER THE TUSCAN SUN (2003). In this largely fictionalized adaptation of Frances Mayes' memoir, Diane Lane is irresistible as our heroine, who, on the heels of a nasty divorce, heads to Italy on a vacation arranged by her best friend (Sandra Oh, playing a character more suited to a network sitcom). There, she falls in love with the Tuscan countryside and on a whim purchases a dilapidated villa in need of dire restoration. But as she works on the house and becomes acquainted with the locals, she realizes there's still one thing missing from her rapidly improving lot in life: amore. Tuscan Sun largely plays out as one might expect, though the journey is so enjoyable that many viewers won't mind being led down this familiar path once more. Lane's heartfelt performance provides pools of depth to her character's plight, and the supporting players are largely a finely drawn bunch, most notably Vincent Riotta as a sympathetic realtor whose married status forces him to suppress his attraction to Frances and Lindsay Duncan as a flamboyant actress constantly rhapsodizing about the brief time she worked with Fellini. A warm and luminous film, Under the Tuscan Sun is perfect for a romantic summer night on the couch.