Masochists at work in Venus in Furs

Understanding the essence of this tease of a play 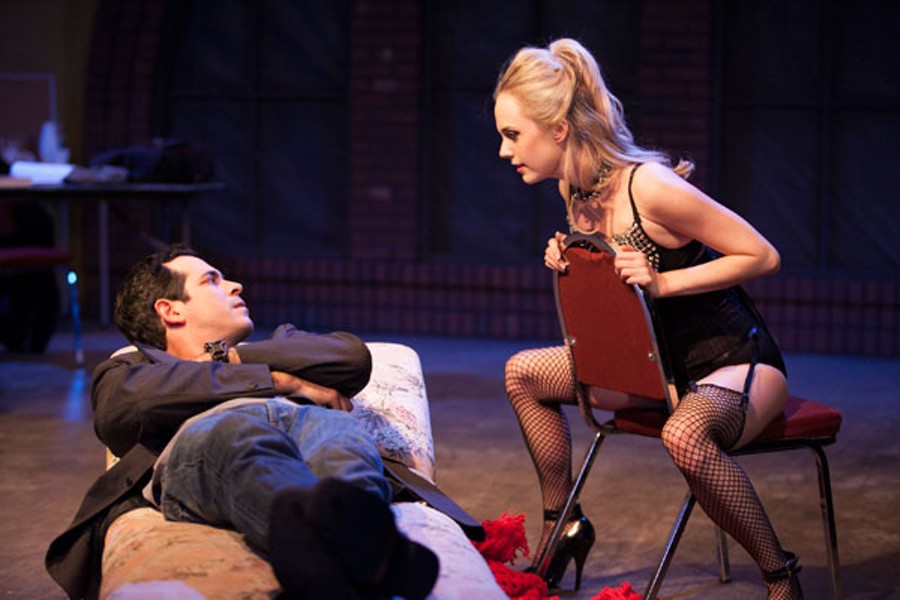 Not too far into David Ives' Venus in Fur, there's a key moment when Vanda Jordan is no longer pleading with playwright/director Thomas Novichek for an audition — after arriving hours late for her appointment, if she actually had one. She has worked on Thomas's sympathies, cataloguing her mishaps on the way to the audition, and she has roused his curiosity, arriving in dominatrix lingerie beneath her outerwear and pulling a vintage dress out of her satchel. It will be perfect for the opening scene of Novichek's new play, his adaptation of Venus in Furs, the novel that birthed the term masochism after its author, Leopold von Sacher-Masoch.

Now that Vanda has earned the right to audition, she must transform herself from the chatty, vulgar, nervous, immature, wise-ass screw-up who just barged in out of the rain. She must become the imperious and serene Wanda von Dunayev, who is none of the above as the title divinity of Savoch-Masoch's notorious novel, gaining total dominion over its hero, Severin von Kushemski.

The transformation must happen in an instant — and it must be electrifying. For Nicia Carla, who directs this regional premiere at Actor's Theatre of Charlotte, I wouldn't be surprised if this jump-cut transition became the audition moment within this audition story when she chose her Vanda. Slash Wanda. Slash Venus.

No matter how newcomer Charlotte Kate Fox won this role, she certainly nailed the electricity on opening night. After seeing this metamorphosis as Ives must have intended it, I have to say that you really haven't seen this play unless it comes packaged with this unique frisson.

For this moment is both the touchstone of Venus in Fur and its essence. It's what we inevitably reference when we begin pondering the question of whether Vanda the actress is bringing Venus to life — or whether Venus herself was portraying Vanda from the moment she walked through the door. Then during the audition, as we shuttle back and forth between Vanda/Thomas and Wanda/Severin in their parallel struggles for fulfillment and dominance, we get the notion that Ives is hinting that she is both.

Yes, it's quite possible that Ives is striving to celebrate the eternal variety and mystery of woman. Yet as worshipful as Ives, or Novichek, or Sacher-Masoch may be toward their women, Vanda is over and over again breaking out of her Wanda character and reminding us that any attempt by men to exalt a woman and put her on a pedestal — even a dominant one — is arrogant, presumptuous, belittling and sexist.

She's a handful for Novichek, and after a while, you get a wicked inkling why he was drawn to the font of masochism in adapting Venus in Furs. Directing a drama that calls for a credible Wanda is a perfect instrument for leading him to the woman he has always wished would enslave him. Personally and professionally, there is much at stake as the read-through of his script, with him reading opposite Vanda as Severin, veers out of control as he immerses himself more and more deeply in his submissive hero.

While Thomas isn't nearly as sensational as his temptress, his role is no less complex, for he begins with fatigued, skeptical indifference and arrives at a confused state where he must have Vanda. But for what — his leading lady, his mistress, his wife, his dominatrix or all of these? Not only does Thomas shuttle back and forth during this emotional rollercoaster ride between the playwright he is and the protagonist he's reading, but even as he's losing himself more completely in Severin, we must be reminded that he is not at all as accomplished or commanding an actor as his reading partner. In this realm, she is superior.

So instead of the most powerful performance of his career, we look for the most supple and nuanced work we have seen from J.R. Adduci, and that's exactly what we get. In a play that ranges from pornography to Greek mythology in its interests, Fox and Adduci both roam among an epic range of moods and feelings. We don't need much assistance in comprehending Fox's bravura, but watching Adduci's shock and wonder taking it all in certainly heightens the effect.

Retaining the thrust stage configuration from Bloody Bloody Andrew Jackson, Carla spaces the action beautifully on Chip Decker's large and spare set. There's a fairly long distance from the fuse box upstage, where Vanda cues some of Hallie Gray's dramatic lighting design for her audition, yet I heard every word without the sense that the actors were straining. The iron pole and the ratty divan are places in Thomas's studio where he and Vanda will communicate from close quarters. These are also artfully spaced near opposite rims of the stage, so each of the three sections of the audience gets the best vantage point for a good chunk of the steamiest action.

Amid the dizzying swirl of possibilities, Carla doesn't rush the seductions or the conflicts in an intermission-free production that clocked in at just under 104 minutes on opening night. They aren't double-underlined as we progress to the intimacies of the divan and beyond, but we can clearly perceive all of Ives' hints about what we're seeing, including the spy hypothesis that emerges late in the action.

Claps of thunder in Decker's sound design, from the moment Vanda enters, are preternaturally apt in their timing. Vanda knows every word of Novichek's unpublished script by heart, and the costumes and props that emerge from her satchel — designed by Carrie Cranford — are perfectly attuned to the drama and where she proposes to take it. Somewhat subtler are the hints that this may all be a dream.

We're explicitly reminded from time to time that Thomas is fatigued, and he's dramatically on the floor at the very end. Nor is the moment when Vanda becomes Wanda the only occasion when we sense a jump-cut. Over and over, they seem to occur when Vanda plunges back into her audition. And when did any audition extend to 100 minutes in the real world?

Clearly, Thomas as the playwright's mouthpiece relishes and revels in ambiguities. Yet ambiguity isn't in Vanda/Wanda/Venus's vocabulary, and it's likely that Ives is questioning and exposing himself when she insists on not learning it. She stands by her word: ambivalence. Teasing us while deconstructing everything.