Marine Makes the Most out of Internship, Graduates College (Soon) and Secures Job with A M King

Design-Build firm A M King is based in Charlotte with offices in Greenville, SC and Chicago, IL.

It was a hazy day in April when I walked into my Construction Management Professional Development class at UNC Charlotte, tired and not terribly interested in hearing yet another guest lecturer. My professor introduced Brian King, President of A M King, and as I listened, I instantly knew that today would be different. Maybe it was his vast knowledge of Design-Build or his authenticity or both, but students were engaged—-no phones in sight.

I also learned that Mr. King often speaks to classes at A M King’s recruiting school partners and that members of his team regularly participate in university career fairs, contribute to campus fundraising events, serve on advisory boards, sponsor collegiate sporting events and even prepare projects for student curriculum.

By the end of the class, I knew that there was so much I could learn from A M King. So, I did something I had never considered before: I approached Mr. King and asked him if his company was accepting internships. They were, by the way, and the rest is history. Next month I graduate from UNC Charlotte with honors and a degree in Construction Management, ready to begin my career at A M King.

My path to this milestone was not straightforward or traditional. And I wasn’t 22 anymore. I wondered what my military background could bring to my internship, how I could weave my experience with schedule-driven and process-oriented projects into my new position.

One assignment stands out. In 2015 I was sent to a new duty station with the Marine Corps Air Ground Combat Center (MCAGCC) in Twentynine Palms, CA. I had the opportunity to assist with the logistical planning for a field exercise. At the time I was assigned to a platoon that fixed generators and provided electrical support to the battalion. It was our mission to provide electrical power to the battalion during field exercises and overseas if we deployed. During this field exercise, I planned where generators would be situated, and what type of generators, which depended on how much power load they needed. This job required logistical planning to get all our equipment there and how to connect their equipment to the generators. I believe this helped me learn to communicate efficiently with others, exercise documentation control, and flex my overall critical thinking skills—all of which are helping me find success at A M King.


Being a Marine was a different sort of education. It was rigorous and structured and gave me the confidence that I needed, the strength to persevere and the ability to overcome obstacles.

Personal hurdles included asthma and a speech impediment that stemmed from hearing problems I had as a child. I believe these difficulties caused a chain of events that led to my introverted nature. Luckily, in the Marine Corps we are encouraged to speak clearly and loudly, and I was able to finally master public speaking. And while my asthma didn’t go away, I remember receiving a perfect physical fitness test score in the Marine Corps. I never settle for second best.

My travels took me to San Diego, CA, Camp Pendleton, CA, Camp Lejeune, NC and Afghanistan. I learned something new at each post and I think these experiences will serve me well as I travel to various A M King project sites around the country in my new job as Project Engineer. To be honest, I would have stayed in the Marines; however, in my seventh year of service, I was injured overseas and honorably medically discharged. Fate was pushing me in another direction, one that took me back to school, and ultimately to A M King.

Without a future in the military, I shifted gears and began seriously thinking about what was next. For me, going back to school wasn’t an easy decision. I had never been a good student. Truth was, I detested school. After high school, I worked three tough, exhausting part-time jobs on Chicago’s South Side rather than consider college. But in the military, I learned about adapting to change and adopting discipline and I decided I would apply. I moved to Florida and attended Hillsborough Community College where I received my Associate’s in Arts degree (A.A.) — transfer track. I elected to pursue Construction Management at UNC Charlotte, remembering the satisfaction I experienced working with my dad on renovation projects. I learned to analyze why something wasn’t working, investigate and then find a solution. During my program in Charlotte, I became a teaching assistant for Construction Planning, Plan Reading, Auto CAD, and Engineering Economics. 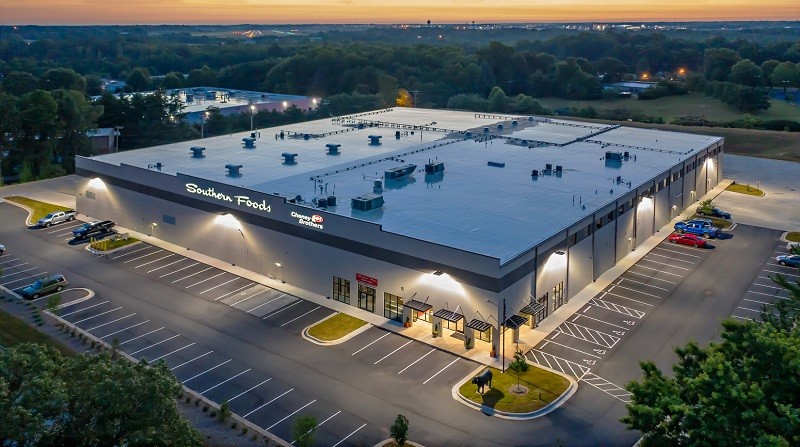 I started my internship with A M King at the Southern Foods Meat, Seafood, and Cheese Processing Facility in Greensboro, NC the summer of 2019. I joined the A M King team again this past summer where I worked out of the Charlotte office on several projects, including the Henry Schein Upfit Project (Indian Trail, NC); also assisting in Martin’s Distribution Warehouse Upfit (Charlotte, NC) and an ALDI Renovation (Webberville, MI).

During my internship, I have capitalized on the organizational skills I learned in the Marines, which I’ve used in assisting with planning and document control. This list includes take-offs, estimates, budgeting, bid lists, contracts, submittals, RFIs, updating drawings and logs and closeouts. I have gained experience in the field with physical construction, as well as what goes on behind the scenes in the office. The team here is extremely knowledgeable and professional; if you have questions they will answer and explain through examples. It is also refreshing to be part of a company that gives back to the community in so many ways throughout the year.


When I finished high school, my future didn’t feel very bright. Then I found a rewarding career in the military. I never imagined that all these years later I would be a college graduate officially accepting a job at a premier Design-Build firm. But everything I have done has led to this moment. Every failure has been an opportunity to succeed. I have adapted to changes in my life and persevered to push past obstacles. As a veteran, I have learned that It is up to each one of us to better ourselves no matter how difficult or uncomfortable we get. I’m grateful that A M King took a chance on me, despite my unconventional journey, and that my experience in the Armed Services is viewed as an asset. I appreciate that I have been welcomed into this very unique company. This is not the end of my story, though. It’s just the beginning. . .


In December, Brenden Stucko will graduate with honors from UNC Charlotte with a Bachelor of Science (B.S.) degree in Construction Management. He has accepted the position of Project Engineer with A M King, beginning in January.