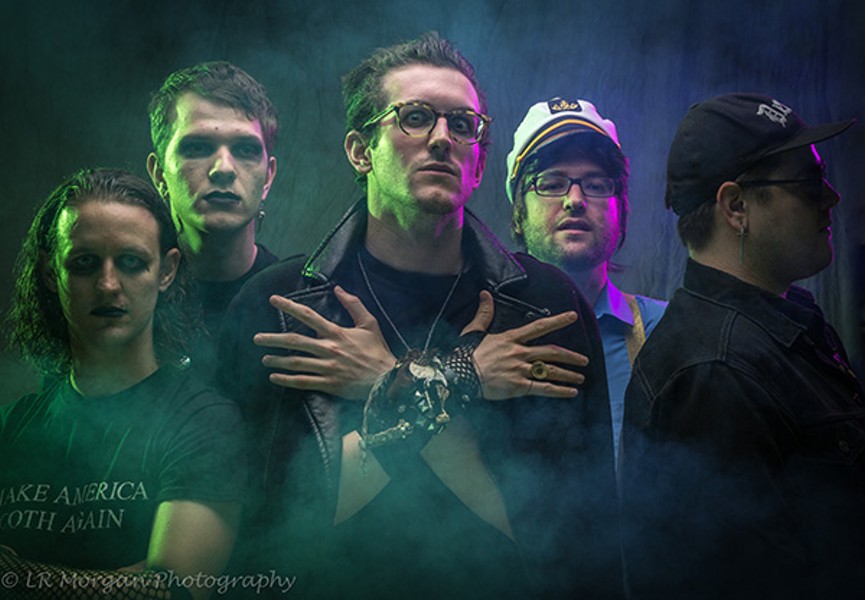 LIKE A MAGIC TRICK, Mat Duncan pulled Mall Goth out of a hat. The name of Duncan's goth band is also the name of a character the singer and songwriter plays in darkly comic sets that have become full-blown fringe theater. It's like a pocket Rocky Horror Picture Show with more monsters. Fittingly, the band was born like Frankenstein's monster, says Duncan, stitched together from random elements to form a powerful whole.

"I took part in this 'band from a hat' thing at the Courtroom, a music venue in Rock Hill. A bunch of musicians put their names in a hat, which were drawn out at random." Thrown together with strangers, and with a month to transition into a working band, the collective needed a concept.

"I said, 'I want to make goth music, so let's make this a goth band,'" Duncan says. "So we started writing goth songs, and we decided to call the band Mall Goth."

Creative Loafing: How did you start adding theatrical elements to your set.

Duncan: We added characters that come onstage and speak during the music or in between songs. We wrote back stories for all the characters. It grew into this whole mythos that surrounded these characters, and we wrote successive acts inside of this universe.

Each set we play is an act that has a story arc and a plot. In each one, Mall Goth goes on a journey of self-discovery or he has to defend himself against some antagonist that represents everything he's against. Mall Goth's antagonists are banal, happy-go-lucky types who are the incarnation of Middle America — the kind of people that a lot of us are. They start off meaning well, but at some point they cross this line where they want Mall Goth to become like them. They want to impose their values on Mall Goth, and that's something he can never accept.

I play Mall Goth, and there's a different antagonist for every set, which is a complete act. Chippy Bat always plays the antagonists. He plays Governor Pat, who is not necessarily Governor Pat McCrory, but there are a lot of similarities between the two. Another antagonist is Mall Goth's stepdad Chet. There's an act called Beyond the Edge of Known Space where Mall Goth is transported to another plane of existence and he encounters a goblin Named Yoggi. Additional characters appear in just one set or they have cameos or walk-on roles. There's Goth Mom played by Emily Furr, and there's a monstrous creature played by Charlotte performance artist Jon Prichard.

You're performing at BOOM, Charlotte's fringe arts fest. What can we expect?

For BOOM we're doing a new version of the first Mall Goth story we ever wrote. It's the stepdad story where Goth Dad, Mall Goth's beloved father, dies. Goth Mom starts dating this new guy, Chet, who becomes Mall Goth's stepdad. Stepdad and Mall Goth don't get along. Mall Goth is really an antisocial misanthrope. He's kind of dark and brooding. Stepdad is a happy-go-lucky parrothead, a big Jimmy Buffett fan. He loves smooth jazz, boating and fly-fishing. There's nothing wrong with stepdad. He's just not someone Mall Goth can relate to. They come into conflict because Stepdad insists that they get along well. He just keeps escalating the situation, insisting that Mall Goth become just like him.

Chippy Bat plays some smooth jazz at a climactic moment of our Boom Festival set. He has his big Kenny G moment that's kind of dark smooth jazz. It's a moment where Stepdad Chet goes from being innocuous to really menacing. We're going to have all our usual performers and band members for BOOM, but we're adding some new instrumental accompaniment and a couple of performers who have never performed at Mall Goth shows before. It should be exciting.

Your debut album arrives this summer on vinyl. What story will the LP tell?

It's called Mall Goth I. This is the origin story. In addition to the core members, we've added auxiliary percussion, euphonium, piano, flute, trombone and trumpet. There are 10 songs and recorded theatrical scenes with sound effects. You hear people walking around, opening doors, or the ocean nearby. You hear a sound collage when there's a storm. It has the kind of atmosphere created by a radio play of the 1930s. You can get a bit of a sneak preview at the BOOM show.

How much of the Mall Goth saga is autobiographical?

Mall Goth isn't me. If I was talking about my own life and what is interesting to me, I think that would be pretty boring. Mall Goth has a warped view of the world, and he is unable to compromise his vision. He's true to himself, but I think Mall Goth is kind of tragic. He never really wins. He has a victory over Stepdad or over this beast from another planet, but at the end of the day he's still Mall Goth. He still has to deal with all his problems. I think there's something beautiful about that. Goth culture is complex, but for me, it's the view that things don't have to be neat, pretty or joyful to be beautiful.