Make Your Own Vietnamese Soup 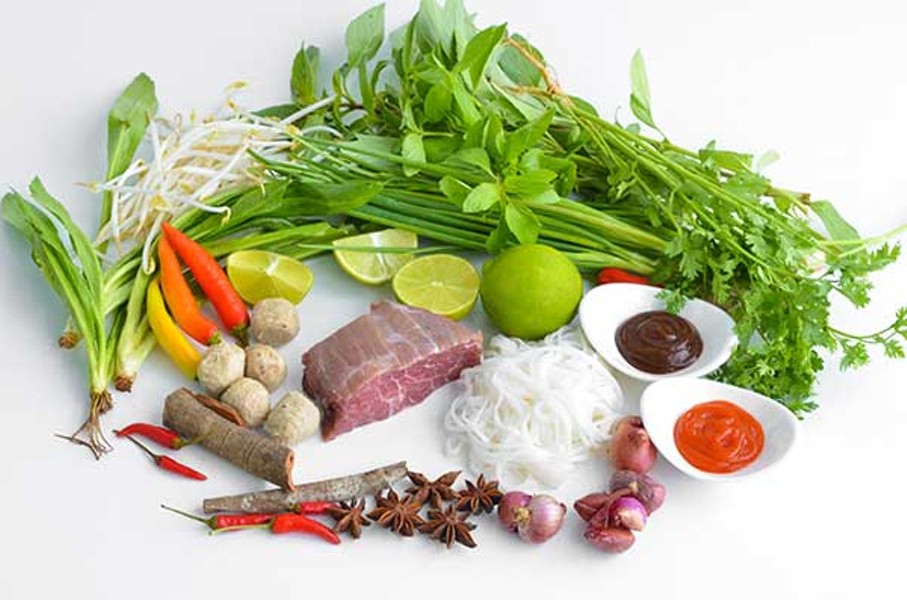 Only if you've been living under a rock at the bottom of the ocean for the last decade have you missed the ascendency of pho, Vietnam's internationally beloved comfort food.

The steaming meal is soup and salad in the same bowl, a fragrant beef broth in which delicate rice noodles and meat parts comingle with fresh herbs and sprouts, amidst a customized mixture of condiments.

In summer, pho heats you up and makes you sweat, breaking the seasonal fever. In winter, pho will warm your bones and melt away your congestion. It's equally nourishing and satisfying in spring and fall, morning and night.

I tend to do my cooking by improvisation, but that doesn't work with pho, despite its apparent simplicity. The broth is elusive, even if you know what the ingredients are. Inevitably, one or more of the spices will come on too strong, resulting in more of an unbalanced cacophony than the understated, harmonious symphony that has conquered the slurping masses.

My numerous failures left me discouraged, with no other choice than to head for my local pho shop to get my fix. But this drought ended when Andrea Nguyen, the undisputed authority on Vietnamese food in America, was kind enough to email me the keys to the kingdom.

Nguyen used me as a recipe tester for her masterful new cookbook, The Pho Cookbook (Ten Speed Press, 2017). My main assignment was to help replicate and troubleshoot the recipe for pressure cooker pho, a method that expedites the usual hours-long simmering of bones behind your typical bowl of pho.

Other than the wholly unexpected addition of a quartered apple — Nguyen's substitute for Vietnamese rock sugar — there weren't any surprises in the ingredients list. I'd used them all before in my previous failed attempts.

I used my trusty Instant Pot, an electric pressure cooker that bears a striking resemblance to R2D2-right down to the endearing beeps it makes at various points in the cooking process. If you've ever been spooked by the rattling and hissing of a stovetop pressure cooker that seemed on the verge of detonating in your kitchen, the Instant Pot is a silent alternative that won't even release the flavors of its contents into the kitchen air.

Entering the pho-bidden kingdom gave me the confidence to start coining my own pho-centered puns, a practice that many restaurateurs have encouraged by giving their establishments goofy names like PHO-ever YUM, PhoKing Delicious, and What the Pho. Don't forget local hot dog guy Vic the Chili Man's barbecue-inspired invention, the Pho Q Dog, at last year's Dudeapalooza.

Cover to cover, Nguyen's cookbook is inspiring, beautiful and informative, filled with studio pho-tos of the finished recipes and street scenes of the pho-life in Vietnam. And there is a big focus on the history of pho, which is inseparable from the history of Vietnam. All of the elements combine to fascinating and mouth-watering reading material.

In addition to recipes for various preparations of pho, from traditional to chicken to seafood and vegetarian versions, it includes a section of pho-flavored spinoffs, like the intimidating but doable pho dumplings that I also recipe-tested, along with side dishes meant to accompany a pho-fledged feast.

With Nguyen's permission I will share the pressure cooker pho recipe that I helped test. Being a lover of pho and my Instant Pot, this recipe has worn a very soft spot in my heart and belly. For space reasons I had to condense her recipe from the printed version. It should be enough to get you started. But if you really want to get with the pho-gram, you'll need your own copy.

½ small red or yellow onion, thinly-sliced against the grain and soaked in water for ten minutes

Toast the spices on medium heat in the pressure cooker for a few minutes, shaking or stirring, until fragrant. Add ginger and onion; stir until aromatic and slightly charred.

Add four cups water to stop the cooking process. Add the bones, brisket, apple, salt, and five more cups of water. Lock the lid and pressure cook for 20 minutes at 15 psi or higher.

Remove from heat. Allow pressure to go down to the point where you can open the pressure cooker. Season with fish sauce, salt and sugar if desired. Remove the meat, soak in water for 10 minutes to prevent drying, and set aside until serving time. Refrigerate the broth to make it easy to skim fat, if desired.

While broth is cooking, soak the noodles in hot water until pliable and opaque. Drain and rinse and drain again. Divide among four bowls. At serving time, dunk each portion of noodles in boiling water, then replace in the bowls. Top with the brisket, steak, onion, green onion, cilantro, and pepper. Heat the broth to a boil and ladle into the bowls. Dive in and add condiments to tweak flavor. Invite people over to enjoy your handiwork while you assault them with puns. Your audience will be captive until the pho runs dry.

Adapted from The Pho Cookbook by Andrea Nguyen with permission of the author.