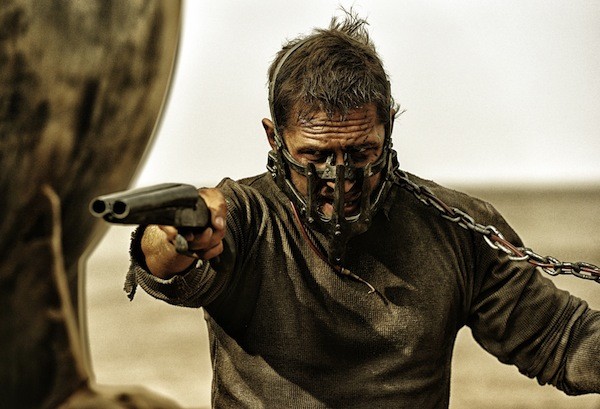 It's perhaps the film's coolest concept. The roving band of baddies in Mad Max: Fury Road don't travel anywhere without their own soundtrack — specifically, a vehicle which sports at its front a huge sound system powered by a rocker feverishly strumming away on his electric guitar. And not just any guitar: This one has the ability to shoot flames from the top. In writer-director George Miller's fourth Mad Max flick, those fiery licks establish that rock 'n' roll ain't noise pollution so much as it's the theme music for the upcoming apocalypse.

Miller's original Mad Max, released in 1979 in his Australian homeland and in 1980 on these shores, was part of the Aussie New Wave that allowed global audiences in the 1970s to see that our neighbors Down Under were making some pretty incredible films. Mad Max set the stage, but 1981's The Road Warrior (aka Mad Max 2) positively set it ablaze, popping up on numerous 10 Best lists and elevating the bar on both vehicular mayhem and daring stuntwork. The third entry, 1985's Mad Max Beyond Thunderdome, found the road warrior going Hollywood — it was the first entry primarily backed by a major studio — and the result was a PG-13 rating (the others had been R), perfectly coiffed hair for star Mel Gibson, and, after a terrific opening 45 minutes, an unfortunate narrative shift that basically found Max hanging out with Peter Pan's Lost Boys.

All of that is just pretext for this latest entry, which absolutely works as a standalone film and requires little knowledge of the original trilogy which ended 30 long years ago. With Tom Hardy cast as the new Max Rockatansky, it's quickly established that this man is a loner who suffered great loss during his lifetime but always manages to keep himself alive and kicking. Yet his troubles commence as soon the film itself, with Max being captured by a group of pasty warriors and in essence used as a human blood bag for a sickly youth named Nux (Nicholas Hoult, hairy as the X-Men's Beast but hairless here). The community is ruled by the savage Immortan Joe (Hugh Keays-Byrne), who keeps a stable of beauties for the purposes of breeding. When the one-armed warrior woman known as Imperator Furiosa (Charlize Theron) crosses Immortan Joe and flees across the desert with his grateful brides in tow, planning to introduce them to a better life, the outraged despot takes off in hot pursuit (sans Sofía Vergara, thankfully), flanked by his soldiers. This includes Nux, who ties his human blood bag to his vehicle. Big mistake: Just as nobody puts Baby in a corner, nobody puts Max in front of a car, like some tarnished hood ornament on a Mercedes-Benz. 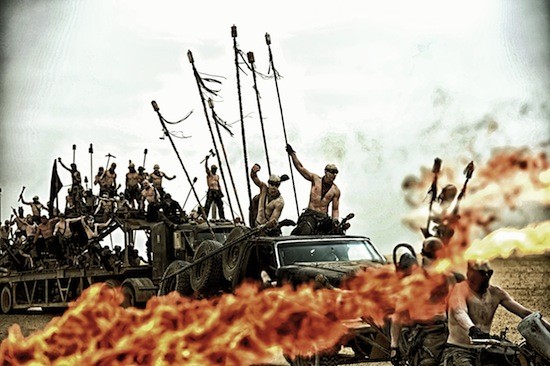 It's hardly a spoiler to reveal that Max eventually frees himself and forges a testy relationship with Furiosa (after all, the enemy of my enemy is my friend). Yet even as they grow mutually respectful, theirs is a camaraderie based on action, not words. Miller makes sure to keep Max's personality intact from the Mel Gibson years, again presenting him as a taciturn fighter who's gruff but compassionate, a man whose personal pain dictates that he keep others at a distance yet whose empathy forces him to make concessions along the way. Hardy was a sound choice to assume the role, and he matches up nicely with Theron, who provides most of the picture's heart (The Vagina Monologues author Eve Ensler was hired to beef up the female roles, a move that has hilariously enraged those pitiful dipshits known as Men's Rights Activists).

Miller throws in a few treats for the series faithful, not only in the inspired casting of Keays-Byrne as Immortan Joe — he previously played head villain Toecutter in the original Mad Max — but in scattered visual references throughout the picture (the widening eyeballs from Mad Max, the music box from The Road Warrior, etc.). There's also a nice shout-out to fellow Aussie trailblazer Peter Weir in the porcupine design of some of the vehicles, a clear homage to Weir's 1974 The Cars That Ate Paris (aka The Cars That Eat People).

But let's cut to the literal chase. Performances, storyline, sops to the faithful — these are all secondary to the series' bread and butter, the action. Post-screening, I joked on Facebook that "The action scenes in Mad Max: Fury Road make the action scenes in Avengers: Age of Ultron look as puny as Bela Lugosi wrestling with that fake octopus in Ed Wood's Bride of the Monster by comparison." Of course, I'm exaggerating (I think I'm exaggerating?), but the truth is that the film's kinetic thrust is breathtaking, with Miller relying as much on physical feats of derring-do as he does on CGI. As a guy who was born without the automotive-fanatic gene (Volkswagen bugs are the ones that look like roly-polys, right?), car chases in movies often bore me, but the ones in Mad Max: Fury Road — like the ones in Mad Max and The Road Warrior — thrilled me to the core. The picture is full of incredible and original sights, many not even related to the chases (the most disturbing one is the feet of one of the villains, perhaps the grossest in film history; it's how we all imagine Rush Limbaugh's feet must look like). Yet it's the vehicular action that towers above everything else. Fast and furious, this revolutionary Road is a solid two hours of maximum overdrive.