Forget the schmaltz in those Hallmark Valentine's cards at Eckerd and CVS. Love is overrated. So in this issue we bring you Creative Loafing's first Lust List, a celebration of love's hot 'n' steamy cousin. We asked you, our readers, to nominate Charlotte's sexiest citizens, and then we found ourselves with the difficult task of narrowing the field to just 10 (actually, 12 -- we gave you two bonuses) hotties. Apologies to those whose nominees don't appear in the following pages. It doesn't mean he or she wasn't worthy. It could mean simply that your nominee lives in Boone. Or maybe your nominee was a pet. Drum roll, please ... 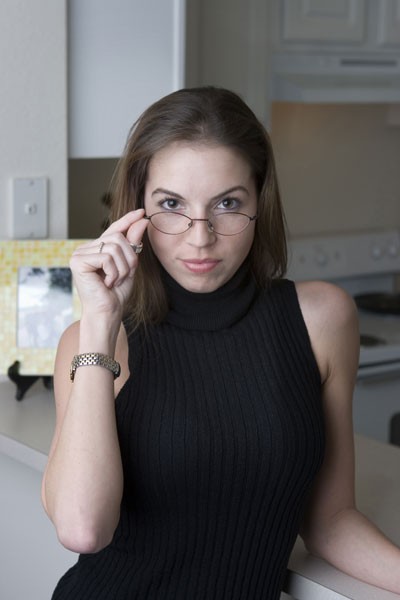 Amanda used to be a sexy school teacher ... for models. She taught posing and glamour to Heidi Klum wannabes at Barbizon Modeling. This hot leasing agent aspires to pop stardom.

Have you ever tried out for American Idol?

I would love to do American Idol, but I'm still under contract with my producers until March. I've been signed with them since I was 19. Until I'm not under contract, I can't.

Where can we find you on a Saturday night?

It's really bad when you have the little 14-year-olds who come up to you and ask if you have a boyfriend. I was an instructor for Barbizon. In modeling school you get cocky boys who think they can get with any girl.

Do people ever try to look at your underwear?

I work part time at Victoria's Secret, so if you walk in there you can pretty much see what type of underwear I'm wearing. I'm obsessed with lingerie.

Tell us a joke.

What is 6 inches long, has a head on it, and drives women crazy?

How much money would you pay to go into outer space?

That would be awesome. If I got the opportunity to go, I would. But I'm broke.

How much are your most expensive jeans?

I'm obsessed with Victoria's Secret's catalog and most of those only cost $29.95.

People who ride their brakes.

Do you know where the expression pet peeve came from?

Little petty things that peeve you off.

Do you wish you had your own Web site?

I used to. But it's being taken down when my modeling contract ends.

If you could ask Viggo Mortenson one question what would it be?

Does Frodo really have the ring or does Bush have it? I've seen that a lot on bumper stickers.

Please outline a clear exit strategy for the American troops in Iraq.

How clear can you get? When the shit goes down, run.

Don't let Jumanee's professional demeanor fool you -- he admits to being a puppy dog at heart (though he's built like a Siberian husky). Owner of his own design and construction firm, this architect's sexiest organ is inside his head.

Why do people lust after you?

Because they have no clue who I really am.

What do you lust after?

First of all, physical attraction. I like height, complexion, nice features like teeth, pretty eyes. If they have some intelligence. We take it for granted, but most people don't. Common sense ain't so common.

Do people ever try to look at your underwear?

Yes, a lot of the patrons here do.

I'll show you mine if you show me yours. Wait, that one might be my line.

How much money would you pay to go into outer space?

People that are knowledgeable of their ignorance and accept it and don't do anything to change it.

Do you know where the expression pet peeve came from?

Some freak that liked his pet a little too much? I have no clue.

Would you save George Bush from a burning house fire if he were screaming out your name for help?

Depends on what day of the week it was. I guess I would. You can't fault him for being an idiot.

What do you think about NASCAR?

NASCAR is pretty cool. My dream is to be a Formula One race car driver. So NASCAR would be a stepping stone to getting there. I like open car racing, I'm not a stock car fan.