Look! Up On The Screen!: The best and worst superhero films of all time | Cover | Creative Loafing Charlotte

Look! Up On The Screen!: The best and worst superhero films of all time

In retrospect, it seems pretty hard to believe. Excluding old-time serials and made-for-TV projects, the first theatrical motion picture based on a Marvel Comics superhero title wasn't a film featuring Spider-Man or Captain America or any of the other animated A-listers. Instead, it was 1986's Howard the Duck, the critical and commercial disaster (executive produced by George Lucas, no less) that many still deem one of the worst pictures of its decade. Hardly the marvelous debut envisioned by Marvel.

Cut to the present, and we find that Marvel's superheroes have thoroughly conquered the box office over the past dozen or so years. And it's not just Marvel: Whether the superhero films hail from DC Comics or another publishing house, or whether they're created directly for the screen, their success has been astonishing. The top-grossing movie in three of the past six years has been a superhero feature (2007's Spider-Man 3, 2008's The Dark Knight and 2012's The Avengers), and the current top grosser for 2013 is Iron Man 3. And it's not just the fanboys clamoring for spandex-clad sagas: Many titles are enjoying critical success as well, including Christopher Nolan's Dark Knight trilogy, The Avengers and select titles in the X-Men and Spider-Man franchises.

Here, then, are my picks for the 10 best and five worst superhero films ever made. And to keep the conversation going, I've also included the picks of critics, cosplayers and other folks who are quite familiar with superhero movies. You can find their selections of the genre's best and worst here. 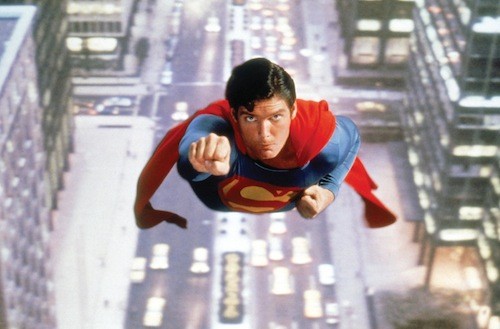 1. SUPERMAN (1978). Even with the explosion of superhero films in the 21st century, director Richard Donner's comparatively old-school Superman still remains the best one ever made. Anchored by an iconic performance from Christopher Reeve as the Man of Steel, it's full of humor and heart, paying enormous respect to the tenets of the comic-page panel while occasionally flashing a delightful tongue-in-cheek attitude. An Oscar winner for its visual effects, this exciting adventure also contains one of John Williams' best scores, a rich screenplay by the heavyweight team of Mario Puzo (The Godfather), Robert Benton (Bonnie and Clyde), David Newman (ditto) and Leslie Newman, and terrific performances down the line, including Gene Hackman as Lex Luthor and Margot Kidder as Lois Lane. 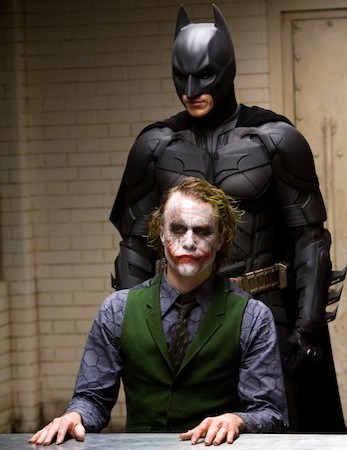 2. THE DARK KNIGHT (2008). The second chapter in Christopher Nolan's Batman trilogy might be the first superhero movie that exudes a palpable sense of dread and menace that tugs at our nerves in a way that both disturbs and delights us. Even in superior entertainment like Spider-Man and The Avengers, there's a feeling that it's all make-believe, but The Dark Knight offers no such safety net — it wears its danger on its sleeve. Christian Bale returns as Batman/Bruce Wayne, Aaron Eckhart stands out as Harvey Dent/Two-Face and, as the Joker, Oscar-winning MVP Heath Ledger is simply mesmerizing as a whirling dervish of cackling, lip-smacking, cheek-sucking sin.

3. X-MEN (2000). 1998's Blade was successful enough ($70 million at the U.S. box office) to set the stage for future cinematic adaptations of comic books, but it was the $157 million gross of X-Men that really encouraged the studios to fling open the doors and start making super-flicks left and right. At a point when many genre films (*cough* Spawn, *cough* Judge Dredd) were being written by mercenaries who wouldn't know the difference between Archie and The Incredible Hulk, this movie was a godsend, with director Bryan Singer punching across a meaty screenplay dealing with the twin horrors of prejudice and fear. And even with the likes of Christopher Reeve, Robert Downey Jr. and Tobey Maguire in the mix, the casting of Hugh Jackman as Wolverine might be the best of the bunch. 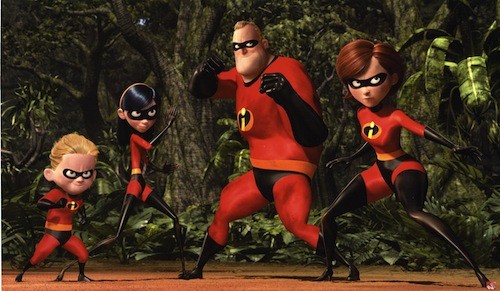 4. THE INCREDIBLES (2004). The vigorous embrace of mediocrity above all else continues to grip this America that has become too lazy to think for itself, and writer-director Brad Bird smartly works this national tragedy into an animated superhero tale that's, well, pretty incredible. The Incredibles — Mom, Dad, kids — are presented as the modern American family that's expected to conform to the societal status quo (i.e., blend with the bland) rather than champion its own uniqueness. The domestic conflicts triggered by the clan's suburban ennui give way to an acceptance of each person's individuality and, consequently, an ability to pool their resources as both crime fighters and family members. For all its kid-friendly sops, this Pixar production is actually one of the genre's most mature outings.

5. BATMAN BEGINS (2005). Batman Begins marked the beginning of a beautiful friendship — between the fans who felt betrayed when a popular franchise went belly up in the late 1990s and the creative forces who resurrected it in grand style. Never afraid to peer into the darkest recesses of the mind, Christopher Nolan creates a brooding picture that has as much in common with his previous works like Memento and Insomnia as it does with the storied saga of the Caped Crusader. Those who dismissed this as escapist fare ignored the myriad adult themes that bulked up the picture, issues ranging from the duality of man to the politics of fear. This is that rare blockbuster in which thought often speaks louder than either action or words.

6. X-MEN: FIRST CLASS (2011). This X-Men prequel is an exemplary movie, charting the early years of Charles Xavier (James McAvoy), Erik Lehnsherr (Michael Fassbender), the shape-shifting Raven/Mystique (Jennifer Lawrence) and other mutants. Director Matthew Vaughn appears to be something of a shape-shifter himself, moving from the steely coolness of Layer Cake to the fairy tale romance of Stardust to the relentless brutality of Kick-Ass. Here, he ably demonstrates that he can tackle a Hollywood blockbuster without getting swallowed whole by the experience. The CGI is excellent, but it's the people who matter most, and such a humanistic approach results in some memorable characterizations as well as a standout performance by Fassbender as Erik Lehnsherr/Magneto. 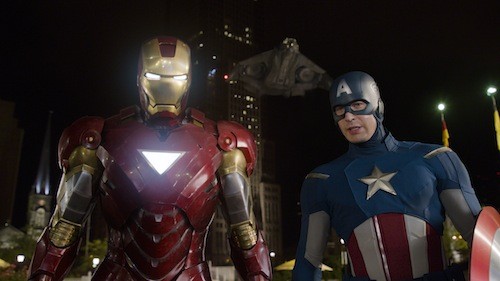 7. THE AVENGERS (2012). The Avengers is, quite simply, a brainy and brawny blast. It's a culmination of numerous super-sagas that have been building toward this moment, and it manages to trump every last one of them. As expected, Robert Downey Jr. (Tony Stark/Iron Man) provides the bulk of the humor, Chris Evans (Steve Rogers/Captain America) and Chris Hemsworth (Thor) provide the bulk of the beef, and Scarlett Johansson (Natasha Romanoff/Black Widow) provides some softer moments to go along with the expected athleticism. Yet the surprising scene-stealer is Mark Ruffalo, who provides Bruce Banner with a stirring soulfulness. What's more, by employing the motion-capture technique rather than straight-up CGI, this is the first film to absolutely nail the Hulk.

8. V FOR VENDETTA (2006). Seven years after its release, this adaptation of the influential graphic novel continues to serve as a wake-up call to Americans disgusted that their country has been hijacked by criminals, profiteers and warhawks. Set in an Orwellian England in the year 2020 (but packed with allusions to the United States post-Y2K), this finds a masked vigilante named V (Hugo Weaving) recruiting young Evey Hammond (an excellent Natalie Portman) to help him in his battle against the fascistic ruling class. The picture contains its share of explosive set pieces and dashing derring-do, but its import rests in the muddy waters it navigates and the difficult questions it ponders — none more than whether V should be classified as a reckless vigilante or a sterling superhero.

9. SPIDER-MAN (2002). It was a given that the long-awaited Spider-Man movie, released in 2002 after a 39-year gestation period on the comic book page, would make a fortune, even if its hero had been played by John Travolta sporting his Battlefield Earth dreadlocks. But while director Sam Raimi's sure-footed adaptation doesn't quite reach the upper echelon of superhero flicks, it mostly gets everything right, starting with the inspired casting of Tobey Maguire as Peter Parker. The picture also works because Raimi and scripter David Koepp manage to turn it into a successful tightrope act between soap opera and spectacle, retaining the personal elements that made the comic book so popular while providing the requisite big-bang special effects that thankfully never overwhelm the story.

10. THE CROW (1994). In truth, any one of four superior sequels — 1981's Superman II, 2003's X2, 2004's Spider-Man 2, 2012's The Dark Knight Rises — could easily have occupied this final slot. But as those franchises are already well-represented in this list, I've elected to go with an influential comic-book adaptation that plays like Death Wish for the MTV generation, as a musician (Brandon Lee, tragically killed on-set while making this movie) returns from the grave to take revenge on the punks who murdered him and his fiancée. Despite the film's hardcore demeanor — slick visuals, edgy atmospherics and a superb, chart-topping soundtrack — it also possesses a surprisingly sensitive streak, a haunting melancholy underscored by the delicate, almost balletic quality Lee brings to his otherwise steely performance. 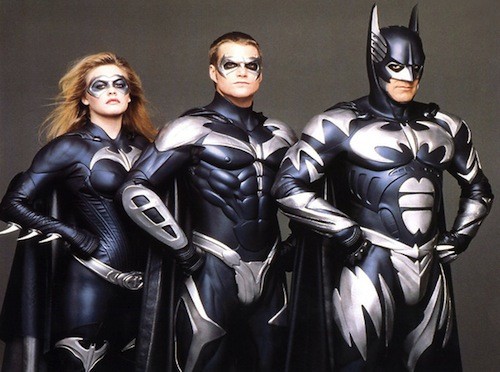 1. BATMAN & ROBIN (1997). After Tim Burton successfully brought the Caped Crusader to the big screen with 1989's Batman and 1992's Batman Returns, Joel Schumacher buried him with 1995's forgettable Batman Forever and this complete grotesquerie, a movie that's about as much fun as a 20-year stint in a Turkish prison. Arnold Schwarzenegger (Mr. Freeze) and Uma Thurman (Poison Ivy) are the limp villains, George Clooney is deadly dull as Batman/Bruce Wayne, and Alicia Silverstone is an annoying presence as Batgirl. The script is incoherent and inconsequential, and even colonic X-rays are more visually appealing. 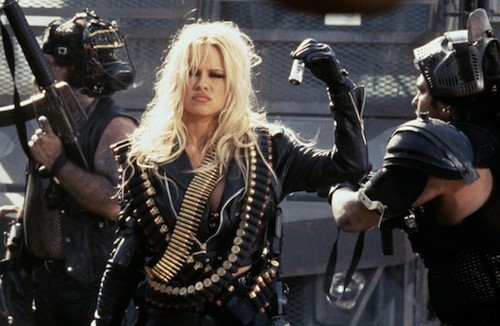 3. BARB WIRE (1996). An apolitical loner who runs a popular nightclub during wartime reluctantly helps an old flame (and the old flame's new love) escape the city, thus thwarting not only the fascistic pursuers but also the corrupt police chief whose heart is ultimately in the right place. Yes, that's the plot of Casablanca, but it's also the plot of — I kid you not — Barb Wire, a dreadful comic adaptation that tries to make a brainy action heroine out of a character who seems like she couldn't spell I.Q. even if you spotted her the "Q." As Ms. Wire, Pamela Anderson Lee is terrible, making the late Anna Nicole Smith look like Maggie Smith by comparison.

4. THE SPIRIT (2008). Will Eisner's seminal comic strip deserved far better than this wretched camp outing, a film in which every jokey, self-aware remark lands with the force of an atomic bomb laying waste to a sand castle. Written and directed by Frank Miller, this finds The Spirit (Gabriel Macht) facing off against his perennial nemesis The Octopus (an awful Samuel L. Jackson), a madman who's intent on acquiring a potion that will render him immortal. In their first battle, The Octopus smashes a toilet over The Spirit's head, laughs maniacally, and declares, "Toilets are always funny!" This movie would know: It clearly deserves to be flushed down one.

5. FANTASTIC FOUR (2005). Certainly, there were a lot of contenders for this final slot — among them 1987's Superman IV: The Quest for Peace, 1996's The Phantom, any Teenage Mutant Ninja Turtles live-action outing — but I've opted to go with Fantastic Four for the simple reason that this flaccid effort arrived in the thick of the new superhero boom, and there's no reason such a tentpole project should be so badly executed on almost every level. Plus, its vision of Dr. Doom (Julian McMahon), a towering comic book villain (think of him as the forerunner to Darth Vader), is pitiable, as he's reduced to a wimpy crook who couldn't even give Scooby and the gang trouble.