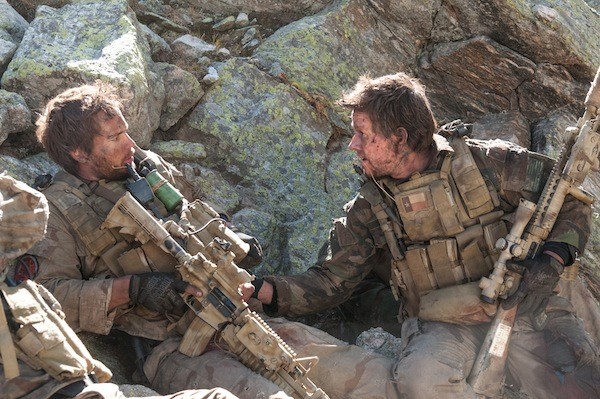 Wars don't exist in a vacuum, but that's not always the case with war movies. While films like All Quiet on the Western Front, Paths of Glory and The Deer Hunter examine their conflicts in the context of the larger, usually political, picture, others (mostly World War II yarns) prefer to focus solely on the event at hand, highlighting the specifics of the mission or the heroics of the participants.

Lone Survivor falls squarely into the second camp. Writer-director Peter Berg, working from the nonfiction book Lone Survivor: The Eyewitness Account of Operation Redwing and the Lost Heroes of SEAL Team 10, has fashioned a film that (presumably like its source material) has no interest in examining or commenting on U.S. policy abroad. This isn't a complex movie like 2012's excellent Zero Dark Thirty; instead, it's a straightforward look at four Navy SEALs and their efforts to stay alive during an ill-fated reconnaissance mission to Afghanistan in 2005. Berg's brand of jingoism, seen in such efforts as The Kingdom and Battleship (where even fearsome aliens were no match for the retired members of our military), has never been put to better use than in this film which shows the Navy SEAL at his fiercest and finest.

Unfortunately, employing only the most minimal of brushstrokes to differentiate the men, Berg doesn't seem particularly interested in them as individuals, meaning that instead of their real-life monikers of Marcus Luttrell (Mark Wahlberg), Michael Murphy (Taylor Kitsch), Danny Dietz (Emile Hirsch) and Matt Axelson (Ben Foster), the credits might as well read "Navy SEAL 1," "Navy SEAL 2," etc. No, Berg is clearly impatient to get to the fireworks: a harrowing battle between the pinned-down SEALs and the Taliban grunts that's splendidly staged and sustained. This middle section of the movie is so riveting and feels so realistic that the final portion, when the title character finds himself in an Afghan village among Taliban haters, proves to be anticlimactic, particularly given its occasional concessions toward Hollywood formula. Ultimately, Lone Survivor is like a chain-restaurant steak: sometimes bloody, ofttimes overcooked, but generally in need of a little more sizzle.