Logan: No Country For Old X-Men 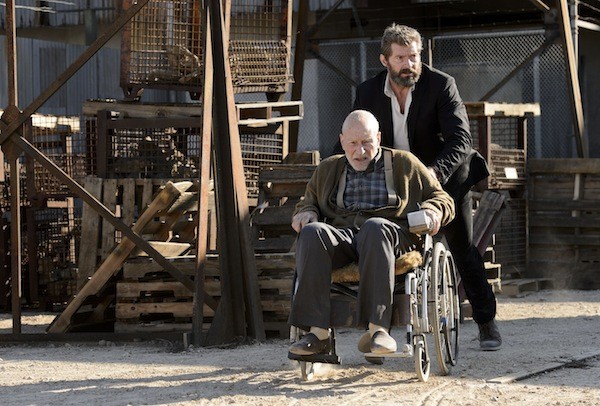 It’s too early to make a definitive declaration, but the R rating handed by the MPAA to last year’s Deadpool might end up being the worst thing to ever happen to comic-book movies.

Certainly, Deadpool earned its R, and it wore it well: Everything about the film was gleefully over the top, and the tongue-in-bloody-cheek attitude matched the gore that smoothly flowed like wine at a sommeliers’ convention. But the massive success of that film has emboldened studios to eye the R when making more superhero flicks, and, in the case of Logan, that turns out to be an unfortunate development.

Set in the year 2029, the movie explores a landscape in which practically all mutants have died off and (shades of Children of Men) no new ones have been born in approximately a quarter-century. The only ones who apparently remain are Logan (Hugh Jackman), toiling away as a limo driver near the U.S./Mexico border (oddly, no wall seems to exist), Charles Xavier (Patrick Stewart), now suffering from dementia, and Caliban (Stephen Merchant), tasked with looking after the former Professor X. But when the gang comes into contact with Laura (Dafne Keen), a little girl who, like Logan, also has the ability to sprout claws and shish-kabob the opposition, it’s clear that the mutant lifestyle isn’t as extinct as presumed. Spurred on by Laura and with Xavier tossed into the back seat, Logan hightails it to a presumed safe haven in Canada, dogged every step of the way by a despicable scientist (Richard E. Grant) and his bumbling minions.

Superhero sagas have occasionally opted to go deeper and darker (The Dark Knight, for instance), but Logan elects to take the full plunge into pitch-black nihilism. It’s Stan Lee by way of Cormac McCarthy, but the end result – basically, No Country for Old X-Men – suffers from its own sense of self-importance. There’s little joy to be had in the experience of watching the movie, with director James Mangold (who also helmed The Wolverine) more interested in serving up groovy kills for the gamers than anything more substantive. Since the first X-Men film in 2000, moviegoers have spent 17 years knowing that Logan/Wolverine has no problem with killing, yet Logan, with its newfound ratings freedom, treats it like a fresh fact. Innocents and evildoers alike are slaughtered with reckless abandon, and the end result makes Natural Born Killers look like The Sound of Music by comparison. Except that Oliver Stone piece at least had purpose behind its gruesomeness – particularly the manner in which this country mindlessly cheers on anybody who can pass as a celebrity. In contrast, the violence in Logan only has the purpose of making 12-year-old kids all that more determined to sneak into the auditorium. At any rate, those who enjoyed watching Keanu Reeves shoot people through the head approximately 400 times in John Wick: Chapter Two will especially enjoy watching Logan stick his claws through people's skulls approximately 400 times here.

Naturally, fanboys who live and die by the hype will love the picture – heck, it won’t even occur to them that they’re allowed to register any feelings other than absolute worship – but more discerning viewers will note that even the plotline isn’t particularly fresh. The evil scientist portrayed by Grant and a swaggering henchman played by Boyd Holbrook come straight from Generic Casting 101 – the film is crucially missing a worthy villain of note – and when the scripters run out of ideas, they paraphrase Stephen Sondheim and elect to send in the clones. This latter decision renders the action sequences even more rote and less interesting.

Still, Logan is extremely well-made — Mangold knows how to frame a shot — and the performances by the leads are top-notch. Jackman, both more wary and more weary than ever in his signature role, is typically excellent – his pain, frustration and tiredness can be felt radiating off the screen. And Stewart is equally compelling, playing a version of Xavier different than what movie audiences have witnessed before. There, however, rests another problem, one that will bother some (like me) more than others. Professor Charles Xavier is a titan among screen heroes, and it’s unsettling seeing this great character reduced to wasting away in his own piss and vomit while grappling with Alzheimer’s — it’s akin to watching Indiana Jones struggle with putting on his Depends, or James Bond popping out his false teeth before retiring for the night. Some will applaud this direction as bold, but in an era in which the villains have completely taken over our country, it just feels like we need our larger-than-life heroes – even the fictional ones – more than ever.