Lofidels Is a One-Man Art-Punk Assault 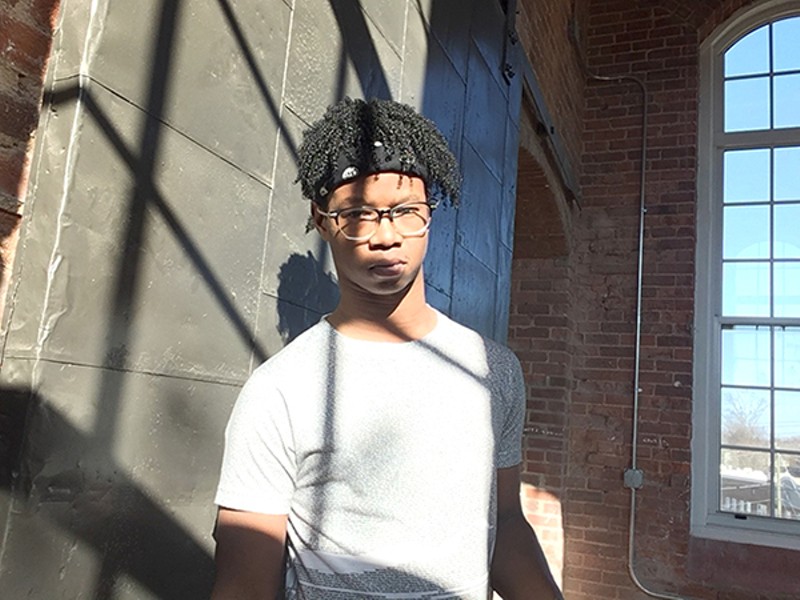 Like any explorer, Lenny Muckle travels light. After playing in two punk bands, the 26-year old multi-instrumentalist and singer decided to strip down his approach to making music. With his art-punk project Lofidels, which releases its second full-length album, Demonstration, on February 22, Muckle creates textured alternative rock where electronics and guitars tangle with lyrics that are angry, vulnerable and philosophical — and he sings and plays everything himself. The traditional band set-up was inefficient, Muckle says, and it hampered his ability to experiment.

"I want to be able to say, 'I know people liked the last thing I did, but what if I did something completely different?" Muckle says.

Decisions like that are difficult in a band, he continues, where even a simple name change can be fraught with trauma.

Identity, for Muckle, is a work in progress. Perhaps it's because he's an outlier — a black artist in the predominantly white punk rock word, and a songwriter who weaves dense psychological narratives where connection among people is damn near impossible.

"I was hoping you'd open to me," Muckle sings over the chiming, climbing layers of anxious guitar in "A Staccato Kid, A Missing Man," the leadoff track of Lofidels' 2016 release Glass Canon. "I'm a goddamn ghost. I am other. I am less. I am."

It's the kind of conflicted and haunting message that is more common in fiction than in a three-minute rock tune.

Wherever Muckle is headed — and he promises that Demonstration will be strikingly different from Glass Canon — it all started with punk. The first song that inspired him was "Sonic Reducer," by the late-'70s Cleveland, Ohio, punk band Dead Boys. Muckle was already taking guitar lessons at that time, and when Green Day's American Idiot came out, he tried to figure out the chords. At his next lesson he asked his instructor to show him how to play a power chord. Once Muckle possessed that nugget of rock knowledge, he was done with formal guitar instruction. 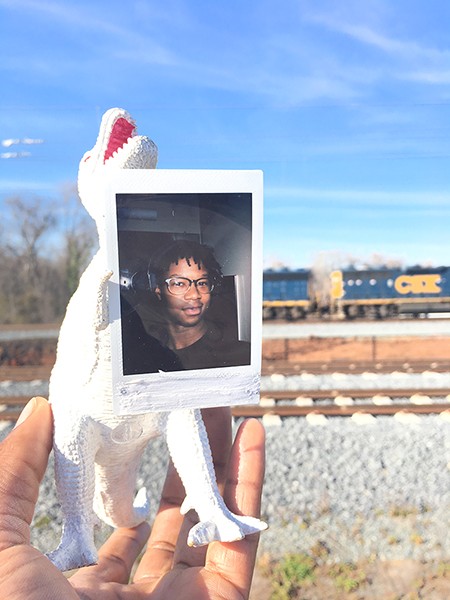 Muckle learned to sing by copying the vocal style of Brody Dalle, the front woman of the late-'90s Australian-American punk group The Distillers. Listening to the British neo-Marxist post-punk outfit Gang of Four, Muckle became interested in textures. He cites the interplay between the band's choppy and stabbing guitars as an inspiration.

"No single guitar is doing anything near virtuoso," Muckle says of the spare and staccato sounds on Gang of Four's classic 1979 debut Entertainment, "but the way they work together is like a composition."

Muckle started his first band, Chain Link Stains, with a couple of his friends at Freedom High School in Morganton. In college at the University of North Carolina at Charlotte, where he majored in psychology, Muckle joined up with three friends to form the O'Reilly Factors, a punk band whose name spoofed the defunct Fox News show hosted by noted sexual predator and conservative Bill O'Reilly.

"We set out to be a political punk band," Muckle remembers, "but we immediately stopped being political and added more emotional stuff."

That emotional element remained central to Muckle's work as Lofidels launched in 2014. Since then, his one-man mix of punk, electronic and indie rock produced two EPs and the Glass Canon LP prior to Demonstration. Muckle considers Lofidels a punk outfit like his previous bands, but prefers the term "exploratory" to describe his metholodolgy. He says his music is experimental not because it sounds avant-garde, but because his creative process welcomes experimentation. "I don't like doing the same thing twice, and I don't intend to do that for some time," he explains.

As the band name suggests, a low-fidelity presentation is integral to Lofidels' aesthetic. Muckle wanted the choruses on Glass Canon's songs to sound hazy and gauzy without sacrificing rawness and urgency.

The band name also conveys Muckle's fidelity to an idea — his dedication to exploring new avenues and taking risks. "It's all in the name for me," he says.

For each project, Muckle creates a challenge for himself. For Glass Canon, the challenge was to create his version of a dance-oriented pop album. "I wanted to see if I can write songs based on a four-on-the-floor dance beat, and still make them compelling," Muckle says.

For Demonstration, the overarching challenge has been much more in terms of process. Muckle has streamlined the decision-making process in order to make his compositions and production more immediate.

"Say I'm walking down the street and I come up with a melody that I record by humming it into my phone," Muckle explains. "Before, I would go home and play that on an instrument and record it. For this album I just plug my phone into an amplifier and sample that."

The resulting music is more honest, he says, which is a desirable quality because his lyrics often focus on self-examination. It's a byproduct of being a psychology major, Muckle says. "Being a psych major is just a symptom of something larger. A lot of the psychology majors are in the department because they think there is something terribly wrong with them," he says, with a chuckle. 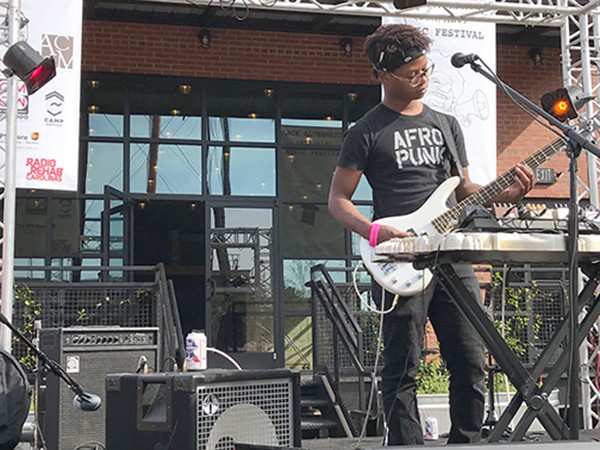 In other words, it's a low-pressure environment where you can discover and isolate just what the heck is going on in your head.

"Studying my coping mechanisms has really helped me realize that as strange as I can be, I'm not crazy," Muckle continues. Crazy, he says, would be not having coping strategies at all. Muckle credits his eccentricities with keeping himself sane. "Stuff like walking down the street, talking to myself? That's what got me through long periods of being alone throughout my formative years."

Periods of thoughtful solitude have fueled Muckle's questioning and often-vulnerable stance on identity, in particularly his position as a black musician in a mostly white punk rock world. A black punk rocker, he says, shouldn't seem unusual. "I feel that black musicians, female musicians and anyone who has a marginalized identity belong in punk rock," Muckle maintains. He believes the punk ethos rings most true for the voices that are usually not heard in society.

That said, Muckle has not escaped occasional stereotyping. It's nothing obvious, like people assuming he should be performing hip-hop instead of punk, he points out. Instead, it's a little subtler — and therefore more insidious. Upon learning that he plays music, Muckle says, nine times out of 10, people will ask if plays he bass or drums.

"It's because, often, black musicians are in the rhythm section — what is traditionally the background of the band," Muckle says. "It's pretty rare that somebody asks me whether or not I play guitar." 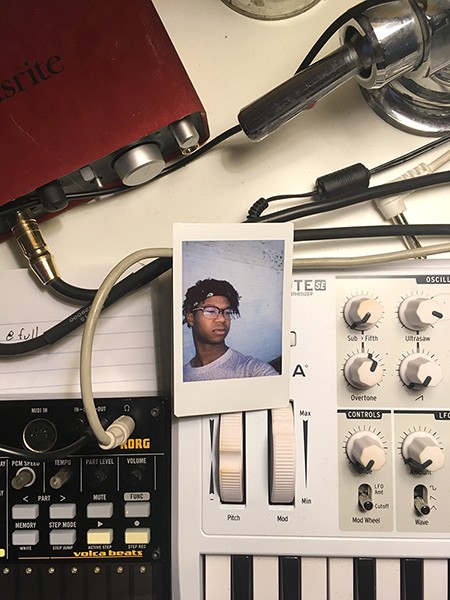 Muckle believes such suppositions have played a part in his decision to go it alone as a one-man band. He poses this thought experiment: If a black man is playing bass and singing in a band and brings in a white guitarist to play guitar parts the black man wrote, many people would automatically assume the white guitarist wrote the parts he's playing.

"The way I do it, it's apparent that I write everything," Muckle says. "Whether it's successful or a failure, it's all on me."

After Demonstration drops, Muckle plans to debut the material in local clubs. "I'm going to try to get into some venues I haven't played in Charlotte before," he says, adding that he's looking forward to toying with the material live, and discovering new ways to present it.

If Lofidels' electrifying performances last year during the BLA/ALT festival at Camp North End and at the Harvey B. Gantt Center are any indication, the songs will sound quite different from the album versions.

The only constant is that Muckle, as Lofidels, will continue to explore and experiment.

Muckle says a third album is already in the works, but in the meantime, he entertains the worst-case scenario for any musician striking out on a path less traveled.

"If I make an album where I did everything that I wanted to do, and it turns out really bad, I'll just make another album that's completely different," he says.

"I don't think I could have a show so bad or an album so wrong that I'd just stop making music," he adds. "I'm going to want redemption. I'm going to want to try harder next time. I'm doing this for a reason, you know?"