When Shaun Andrews was working in the corporate offices of a well-known railroad company seven years ago, he had the stable job and steady paycheck he had always aspired for, but happiness eluded him.

Every day, Andrews would wake up and search the web for motivational messages to get him through the day. The process was mentally straining in itself, and the messages eventually became repetitive.

This experience eventually inspired him to found InspireInYou, a tech startup that Andrews describes as "Pandora for self-help motivational counseling."

Going into his fourth year, Andrews is still learning new things about the tech world. He discovered #BLKTECHCLT when Sherrell Dorsey hosted the kick-off event last December, and says the experience was refreshing in a world where he rarely sees fellow entrepeneurs that look like him and face similar obstacles.

We sat down with Andrews in the lead-up to the next #BLKTECHCLT, scheduled for March 9, to talk about what those obstacles are and how Charlotte's tech world can become more inclusive by reaching kids early.

Creative Loafing: How does InspireInYou work?

Shaun Andrews: We have individuals registered with our app, and we kind of assess where they are mentally and then we assign audio content to them from certified counselors, motivational speakers, clergy, life coaches — it's specific to the issues they're dealing with.

With other apps you can go in and say, "Ok, I'm stressed today, let me listen to this." We actually ask you a series of questions that helps guide you to where you need to be. What we found is a lot of people have mental issues like depression, but nobody wants to seek help. Now what our platform is able to do, we're able to completely remove the negative stigma associated with self-help care, lower the cost and increase the access.

I played football in college. On a college campus, the football payers are the most popular guys, so we really never had anything to worry about in regards to popularity and everyone was cool. After college, one of my friends I played football with committed suicide. I had another friend I played football with in high school, he committed suicide, and the more and more we looked at depression, and I was like, "Man this is something that's really big but it's not one of those things that's really out there." Especially in the black community, we like to cover things up, pray about it, things like that.

It wasn't until I had my own dealings with it that I [came up with InspireInYou]. After graduate school I worked for a railroad company, it was an extremely stressful environment. I was just struggling getting through the day. I remember coming in one day and there was a noose sitting on my desk. I don't know how it got there. I'm a happy jovial guy, that's my nature, but being in that environment I had to switch who I was, and it affected me.

I started to be aware of mental health all around me. Even in pop culture. Like for instance, now you look at Kanye West, even with Donald Trump, people are talking about his mental health. It's everywhere, so I started looking at this and thinking, if this is everywhere why isn't someone doing something about it? Why isn't there a tool where you don't really have to identify yourself? So I had this idea and I put everything behind it and went full speed ahead and that's where I am now. 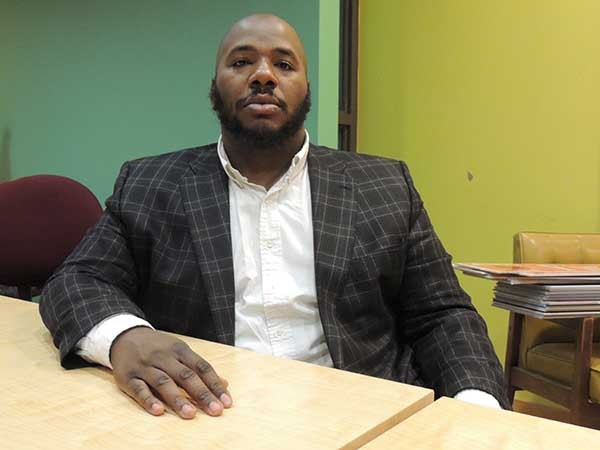 Has technology and app making always been an interest of yours?

It has not. The reason I got into technology is that it was the easiest solution to the problem for me. I created it for everybody but I really created it for myself. How can I use this?

What has it been like for you to enter that world?

It's difficult. I have a hurdle of just having no technology experience, so just getting myself up to speed, reading Tech Crunch and all those sorts of things. Just to understand what is it, and then going through partnerships, and it's just been difficult, but I love every step of the way. It's the learning curve of not having a tech background and having to dive in while at the same time having a family, so juggling that.

Did you feel pressure from a social standpoint?

As an African-American guy, once you get a really good job, you're family looks at you like, "Man, you better keep that." So whenever you decide to do something that's totally opposed to that, it's like, "What are you crazy? What are you doing?" I remember the first time I was sitting at my dining room table and there were a few friends around and I said, "I've got this idea," and I pitched it to them. They were like, "Man, this is the craziest thing we've ever heard. Nobody's going to listen to that." I kept getting that. What it really caused me to do was to retreat within myself and go into a cocoon and get this cranked out all on my own.

I was married when I started, I'm not married now. Whenever you are in the corporate world, people can hang their hat on that. "Well, Shaun does this and he's at this level," and they can be proud of that. When it's something sort of unknown, when you're self-employed, it's almost like quicksand. How do you transition that into social status? It was very difficult for some folks around me.

As an African-American, we look at jobs more traditionally. You look at banking and certain careers like, "This is good." But [a tech startup] is almost like a crapshoot. Being educated, having a Masters degree, pursuing a Doctorate for a little while, being in corporate America, it was like, "Man, why are you throwing that away?" Having that courage was a huge thing, but I did it solo.

How did you get introduced to Sherrell Dorsey and #BLKTECHCLT?

I went to their first event, I was connected through a friend of mine who told me about it. I went to the event and just the level of expertise that was in the room — I think it was the collective mindset of, "We're going to help each other," was something that I didn't find before. I would go to events and a lot of times it was like being a fly in a bowl of milk. You're separated. I operate in duality, I don't care if you're black or white, but there's still a comfort there. Because there are certain things that I have to deal with that my counterpart may not have to deal with.

I just think Sherrell's work is amazing; for somebody just to have the mindset to bring folks together. I know when I first started it was difficult to find a home for folks like me. We would see each other scattered across the room like, "Hey man, what's up." This is not even being an exclusive thing, but being a place that's welcoming for anybody to come in. But for people to come in and then understand what we go through and how we can help us, it helps everyone out.

What other things could be done to improve diversity in the Charlotte tech world?

I think one of the ways that can kind of help African-Americans is to have some type of ecosystem to get them up to speed on what technology is and what the opportunities are. I think people follow trends and opportunities if they know how lucrative they can be. Sometimes we don't realize that, and we need to start early — I would say in high school or middle school — where we are actively engaging in coding.

But even whenever we are teaching kids coding, connect them to folks who are entrepreneurs who are doing well. They follow people who are doing well. They like glitz and glamour. They understand money. There's a chance of you following this path and ending up the same way, just like with basketball or football players. A lot of times we assume that we're going to teach kids coding, but if you don't tell them what the possibilities are, they're not going to care. "I'm going to make an app to play a game?" No, you're going to make an app because this is a potential for you to take care of your family for the rest of your life and you don't have to worry about code switching and all these issues that come around with being in corporate America.

I think when you position it that way you will have more people latch on board. I had friends who are highly educated who would come and ask me, "Where do you even start? What is a tech startup?" They understand Wells Fargo. That's what they understand. You saying you have a startup, they wonder how that is going to feed your family. They have no reference point. So educating the parents and the children I think will be a way where you can bring people out of that and bring more African-Americans in who are comfortable in the space — who are not like me having to come in and the learning curve is so large. They don't have to worry about knocking down doors; they can just build their own house and open it themselves.