Local Artist Chops Up Photos to Raise Awareness About Gentrification

On the front line

[Editor's Note: This is the first of a two-part series on the role of the artist in gentrification. Check back next week for the second half.]

Economic mobility, social capital, affordable housing. These are just a few of the words that find their way into those uncomfortable-but-necessary Charlotte conversations about the state of our city. Then comes that term — often said in that uniquely Southern "clutch my pearls" and "bless your heart" tone — gentrification.

Charlotte's art community is not one to shudder at the G-word, but local artists can find themselves in an awkward position, giving a voice to the displaced while often — and unwittingly — finding themselves at the head of a rush that eventually leads to raised rent and displacement.

Gentrification has found itself front and center in artistic works around the city. Charlotte artists remove the hushed tone around calling out gentrification, putting their artistic dialogue on display to help force these uncomfortable conversations.

Charlotte artists give a mainstream voice to the muffled shouts of "gentrification" from displaced Charlotteans. Local artists have painted the narratives of the gentrified on brick-and-mortar walls and centuries-old steel at the up-and-coming North Charlotte development site Camp North End, or in the murals of Mosaic Village, just across the street from the historic black college Johnson C. Smith University.

However, that is just one role of the artist in the process occurring in Charlotte and other cities around the nation. A strong presence of the arts community alone can also serve as a signifier of impending gentrification looming over a neighborhood.

The artists that originally make an area a hotspot for local leisure and tourist visits find themselves being pushed out of neighborhoods along with long-time residents, thanks in large part to their own contributions to local culture.

Their murals stay up, but are joined by rising rent prices and those ugly and predatory "We Buy Ugly Houses" signs. This week, I'll look at the role of local artists as voices of the voiceless, while next week in this same section, I'll take a look at the conundrum artists create when they bring culture to a community then find themselves among the displaced.

Janelle Dunlap, social justice creative in residence at the Harvey B. Gantt Center for African-American Arts + Culture, has devoted her artistic practice highlighting the gentrification stories baked deeply into the history of Charlotte's expansion and present day practices. According to Dunlap, "The role of the artist is to pull that underbelly, that thing that is ugly, from under the surface and bring it to the surface by beautifying it, or mocking it, or telling a story with it."

Dunlap's family legacy is tied to Charlotte's gentrification narrative and became the catalyst for her social justice artwork "The Queen's Cusp" and an upcoming series that satirizes advertising signs associated with residential developments during the building process.

Dunlap's great grandmother was a member of the first class of black people registered to graduate from the state of North Carolina. In the 1930s, Dunlap's great-grandmother brought the family from slave-wage sharecroppers to professional working-class status as a registered nurse at Good Samaritan Hospital, the first private hospital in North Carolina designed to exclusively treat black citizens, built in 1891.

"The hospital that she graduated from is where the [Bank of America Stadium] is now. While building a football stadium is significant to our city, that land is also tied to a rich history connected to many family legacies," Dunlap says. "For that hospital to be destroyed because of urban renewal, I feel like it also destroyed my physical attachment to my legacy. It is only through word-of-mouth that I learned of the Good Samaritan Hospital. There is not even a small marker to commemorate that."

For Dunlap the destruction of the Good Samaritan Hospital, contrasted by the preservation of slave plantations, is a conversation that needs to be placed center-stage. Dunlap is currently working on a mixed media photo project mocking leasing advertisements. She captures images of dilapidated buildings and houses that other may consider ugly and juxtaposes images from leasing advertisements on top of the those. 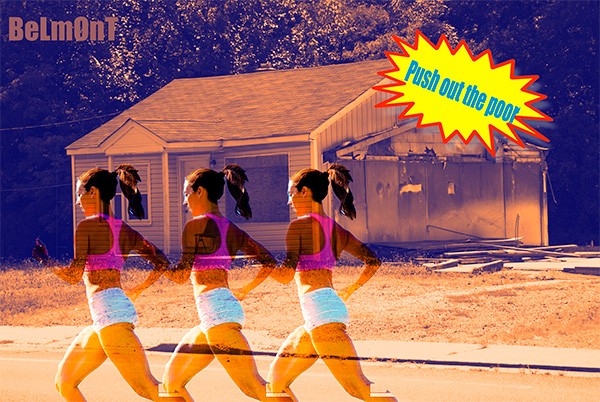 "There will be pictures of people jogging or walking their dog placed with these crumbling buildings. It is to demonstrate the social and urban colonization happening with our community," Dunlap says. "We have a lot of young professionals moving into the area and they don't understand their place in this (gentrification process). Not that they should feel guilty about it, but they should be aware that they are oftentimes moving entire communities out of neighborhoods just by their presence alone."

As Dunlap gets deeper into her mixed media project, she has found herself examining how those not a part of communities of color identify the neighborhoods pre-gentrification, which is often through a lens of "ugliness" and as a place that "must be changed"— including those families that have lived there for generations.

Dunlap's previous community art project, The Queen's Cusp, was a community vision board that served as collaboratively construction collage acting as a mirror to the troubling realities of Charlotte's racial and socio-economic climate throughout the decades. That project introduced Dunlap to the filter used by those focused on the renewal of communities of color, whether they're aware of it or not.

During her research of the Red Lining Highway 277 project, she discovered how this filter helped destroy the legacy of Charlotte's black neighborhoods in the Uptown area, similar to the story of Good Samaritan Hospital.

"I read and did a lot of research behind why the decision was made to displace neighborhoods like Biddleville and Brooklyn Village." She explained in more detail, "There was a lot of language that said that these communities were 'ghettoes' and 'slums.'"

For Dunlap, her job as a social justice artist is to create works that educate others through beauty and juxtaposition provoking conversation. Dunlap is just one example of many local artists provoking the uncomfortable conversation of gentrification in Charlotte.

Artists serving as the catalyst that start the hard conversation about gentrification is a familiar role that many come to expect from these outlier artistic observers.

However, the innovation of the outlier artists dwelling in a particular community can become a beacon for gentrification. Their creativity and vibrancy provoke conversation about redevelopment that transforms into revitalization projects, which focus on the bottom line and can quickly turn into social and emotional gentrification.

Next week, I'll look into how hip arts districts often pave the way for displacement in some of Charlotte's most historic neighborhoods.