How to dodge a bullet

The quiet resort town of Lake Ozark, Missouri sets the stage for the Southern gothic crime drama, Ozark, a series that premieres its second season on Netflix today.

In the show, Jason Bateman plays Marty Byrde, a financial advisor who launders money for a dangerous cartel. After his partner is found skimming off the top, Byrde moves his family from Chicago to the Lake of the Ozarks in a spur-of-the-moment attempt to launder more money and save his own neck.

That's where Rob Treveiler comes in. The actor, who lives in Charlotte, plays no-nonsense Sheriff John Nix. Nix first meets Marty and Nancy Byrde when their oldest child, Charlotte, is caught joyriding a resident's boat. The two butt heads immediately, setting the stage for plenty of conflict to come.

Creative Loafing caught up with Treveiler to discuss the new season of Ozark, the state of Charlotte's film industry and whether he relates Sheriff Nix.

Creative Loafing: A lot of characters were killed off in the first season, 15 in total. We still don't know if you've survived the second season, but is it stressful to read through a script in a show like that?

Rob Treveiler: The nature with this type of programming now, the lid is off as far as that goes. Game of Thrones — whoever the lead guy was and they killed him in the third episode of that show — it was just, all of a sudden, the lid was off and everybody is in peril at any given time. Every character. You just don't know. And so you just kind of have to live with that. From my character's standpoint, all I can do is look at the script and go, "He's a threat and he's a threat," to me, to my character. 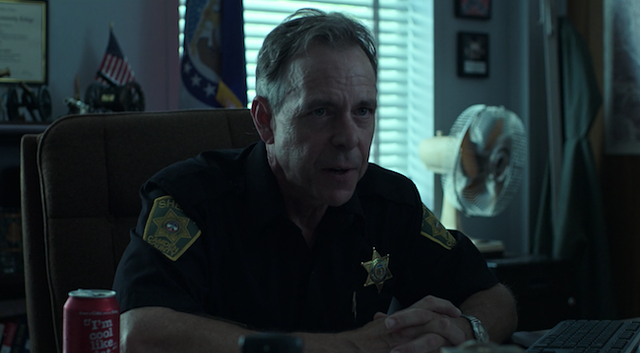 Without any spoilers, how does season two differ from season one and what are you excited about this season?

Season one set us up for a mayhem that ensues in season two, pretty much, and Netflix makes us keep everything really close to the vest. But there's a bit of attrition in the second season, I can tell you that. And there's a new cartel element that's present in the second season. They just don't let us tell anything.

Pretty much across the board, the producers, Jason Bateman and everyone else, they're really excited about how the second season came out. They liked it better than the first season, which I thought was an interesting comment because the first season was good. You don't really know how a show is going to come out when you're working on it because there are so many variables and different balls in the air and until you see it as a uniform piece you can't really go, "This is going to be great!" You can't tell. So it was a pleasant surprise for everybody.

A few years ago, Charlotte was a hotbed for the filming industry but now it's shifted to Atlanta because of the loss of film incentives here. What's it like being a Charlotte actor and seeing Atlanta get all the action?

How do you identify with the sheriff and if you see any similarities between yourself in real life and yourself in the role.

This particular character, it's not as close to me as some other stuff that I've played. Like when I was in The Accountant, that movie with Ben Affleck, and I played his dad in a series of flashbacks. That was a lot closer to me because the character was similar to my dad. That's easy mining. That's kind of low-hanging fruit as far as acting goes, to be able to tap into.

This guy's a little different because I'm not originally from rural Arkansas like this guy is. The fortunate thing is that I've lived in the South and run around with folks like that for the whole time I've lived here. I'm not from the South but I've lived in the South longer than any place else in my life. I'm able to borrow some stuff for that. I was able to talk to some of my friends who've been in law enforcement in that type of environment — very rural — and get a beat on that. So for me, for this character, a lot of it is research and application. Do the research and apply it and whatever sensibilities I bring it's just me, it's just who my personality is that comes through.