Life of Pi worth examining

It was Rod Serling, at the start of each episode of The Twilight Zone, who promised to whisk viewers to "a dimension not only of sight and sound but of mind; a journey into a wondrous land of imagination." Yet here's Ang Lee stealthily co-opting that claim for Life of Pi, his rapturous adaptation of Yann Martel's best-selling novel. 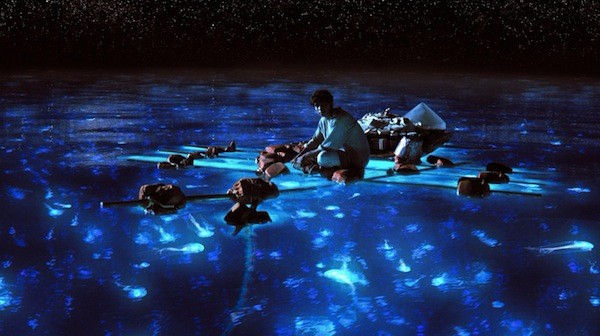 Martel's 2001 book has long been one of those works coveted by filmmakers yet deemed unfilmable in many circles. But Hollywood, perhaps surprisingly, has a good history with turning unfilmable novels into sterling movies (Slaughterhouse Five, The Unbearable Lightness of Being, The English Patient and, most recently, the underrated Cloud Atlas), and Life of Pi can be added to the winners' circle. Working from David Magee's screenplay, Lee, the Oscar-winning director of Brokeback Mountain, has crafted a visually sumptuous (in 3-D, no less!) fable about Pi Patel (newcomer Suraj Sharma, nailing it), an Indian teen who survives a disaster at sea, only to then find himself sharing a small boat with a fierce Bengal tiger.

A framing device in which an adult Pi (Irrfan Khan) recounts his story to a writer (Rafe Spall) isn't really needed, but it also isn't obtrusive, and it's always desirable to see the accomplished Khan on the screen. Magee's script is steeped in spiritualism (early sequences illustrate how Pi amusingly considers himself a Hindu, a Muslim and a Christian), an approach that is further conveyed by the heavenly images captured by cinematographer Claudio Miranda and an effects crew that employs CGI to astounding effect.

The movie won't appeal to everyone: Its themes will seem facile to many, and the ambiguity following a climactic twist might strike some as a cop-out (though it's also in the book). Yet even its detractors will be hard-pressed to opine that Life of Pi is strictly by-the-numbers.