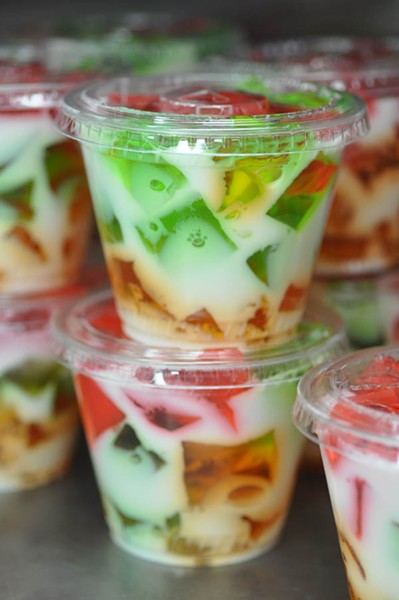 IT'S ALL GELLING TOGETHER: The colorful gelatin cups

As far as a neighborhood bakery concept goes, La Guerrerense Bakery and Tortilla Factory in Monroe is unique. When Argentine native Gabriel Hrebien bought a Mexican tortilla bakery two years ago, he knew he would have to continue making tortillas since his business is in the middle of a densely populated Mexican ex-pat neighborhood. All along Walkup Avenue are taquerias, a fast-casual restaurant, a few tiendas (one with a butcher shop), money wiring spots, a Western wear shop, a juice bar, and another bakery, Panaderia y Cremaria La Reina, which carries torpedo-shaped, French-styled crusty bolillos and the softer, wider telera sandwich rolls. To say you need to speak Spanish in this neighborhood goes without saying. And if you carry an SLR camera, expect more than a few people to dart out of view.

La Guerrerense sits back a bit from the road, a visual and metaphorical separation from surrounding businesses. Once inside, the dark wood cabinets — the singular plush accoutrement — speak of a European sensibility and, indeed, Hrebien based his bakery on the renowned European-styled bakeries in Argentina, a country heavily populated with European immigrants. His family originated in Poland, Russia and the Ukraine.

Within the lit cases are rows of pastries. The population of pastries includes a large selection of concha, the common Mexican sweet bread; and the ubiquitous fried churro. But one cabinet is filled with factura, an assortment of Argentine pastries.

One of the most popular is the medialunas, similar in shape to a croissant, and is made with butter like European croissants, but it is smaller, less flaky, and covered with a sugary syrup — quite delicious nevertheless. Siblings to the medialuna are the vigilante, strips of sweet pastry dough piped with sugar, and the daisy-shaped margarita with the pastry cream or dulce de leche-filled center. The latter is an obsession with Argentines. Many factura, in fact, use this thick sweet caramel-like milk-based sauce. Dulce de leche is thought to have been invented almost 200 years ago in Argentina. Other pastries on the shelves are filled with dulce de membrillo (quince paste), or crema pastelera, a vanilla flavored cream.

Since facturas are commonly bought in large quantities, La Guerrerense has some of the best deals around: All pastries cost between 75 cents and 95 cents.

The pastry chef is Hrebien's American-born daughter Giselle, who says her family's European heritage and recipes have been an inspiration. The largest part of the business, though, is the European-styled cakes made for all occasions. But individual slices of tres leches cakes in an assortment of flavors, including mocha and pineapple, are available, as well as individual portions of tiramisu and cups of colorful gelatin.

Corn tortillas are made on Tuesdays, Thursdays and Saturdays, and are sold by weight. A bag of about 50 tortillas costs $2.90.

It's said that bakeries are often the soul of the neighborhood: Here, children come in frequently, and the Hrebiens have a tradition of giving each a free loaf of bread. What separates La Guerrerense from other Latino bakeries in the area is the unexpected quality of the factura and visual beauty of the cakes. Being on a small side street off 74 in Monroe is a drawback, but not a failing. La Guerrerense has developed a faithful customer base that, thankfully, demands this exquisite authenticity.