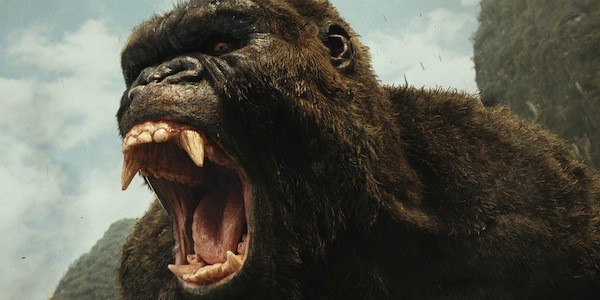 For those who don’t keep up on such matters, the new Kong: Skull Island is part of a so-called “shared universe” of movies. Just as the Marvel movies share a universe and the DC flicks operate in similar fashion, the new King Kong thriller likewise shares a MonsterVerse with 2014’s Godzilla and with the rash of M.U.T.O. (Massive Unidentified Terrestrial Organism) motion pictures barreling our way. (Up next: Godzilla: King of the Monsters in 2019 and Godzilla vs. Kong in 2020.) If it all seems a little too much like the result of brand marketing and capitalist co-opting and less like a natural ebb and flow in artistic temperament and intent, that’s par for the course. The biggest fear is that shared universes will become the norm in modern cinema, leading to that awkward point when, say, the young men from Moonlight team up with the La La Land lovebirds to prevent Paul Blart from inadvertently destroying a shopping mall owned by the Tyrell Corporation.

For now, though, it’s all eyes on Kong: Skull Island, an action romp that’s frequently clever, occasionally inane, and always exciting. Practically all ties to past Kong pictures have been neatly severed, from Carl Denham to Ann Driscoll to the Empire State Building. About all that remains is what’s promoted in the title itself: the island and the ape. Certainly, the human players matter less than ever, with all but one character painted in the broadest strokes possible. The glorious exception is Hank Marlow, played with the right mix of cheer and fear by John C. Reilly. A fighter pilot who’s been stranded on Skull Island since World War II (the film itself is set in 1973, so cue the ample Creedence Clearwater Revival), Marlow proves to be the most sympathetic character in the film, the go-to figure for audience involvement.

The others are the usual stock assemblage of hunky adventurer (Tom Hiddleston), feisty pacifist (Brie Larson), gung-ho military man (Samuel L. Jackson), government wonk (John Goodman), whiny company suit (John Ortiz), and various expendables in the form of scientists and soldiers. All are part of an expedition that arrives on Skull Island and proceeds to get ambushed not only by Kong but by other oversized inhabitants. Before long, though, it becomes clear that the great ape doesn’t deserve to be lumped into the same category as the isle’s other beasties: Unlike the subterranean Skullcrawlers and a particularly nasty spider, Kong has far nobler reasons for employing his berserker rage against the hapless humans. 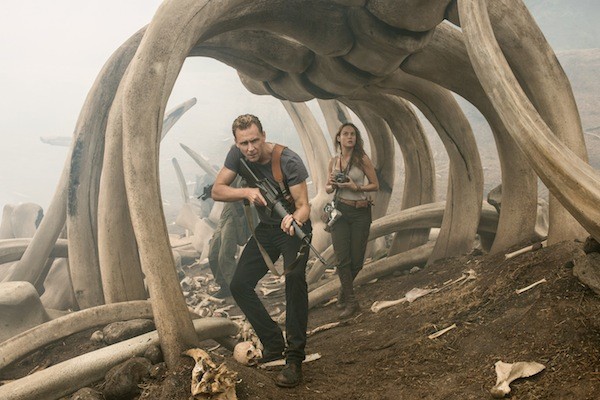 Like Jurassic World’s Colin Trevorrow and Fantastic Four’s Josh Trank, Jordan Vogt-Roberts is the latest indie filmmaker automatically entrusted with a franchise blockbuster. Clearly, the director responsible for 2013’s sweet coming-of-age tale The Kings of Summer has adapted better than the others. Pacing is never an issue in Kong: Skull Island, and some of the shot selections Vogt-Roberts devises with cinematographer Larry Fong are exceptional: Note, particularly, the moments that evoke Apocalypse Now in both form and content. His helming is certainly more accomplished than the script, which passed through several sets of hands before being deemed filmable. Insipid one minute and overstuffed the next, it also never allows an incredibly talented assemblage of players to strut their stuff. Still, the people don’t matter nearly as much as the creatures, and in that respect, Kong: Skull Island offers some truly dazzling visual effects, particularly when it comes to its towering star.

As with all movies occupying a shared universe, it’s imperative that viewers sit through the entire picture to be privy to the requisite coda. Just be sure not to actually read the credits that precede this tease, as it spells out (via copyright acknowledgments) exactly what this surprise addendum will contain. Then again, since no one actually reads the closing credits — aside from OCD critics, of course — the secret is probably safe until it reveals itself.

(How does Kong: Skull Island compare to King Kong, A*P*E, Mighty Joe Young, and other similar movies? For a look at Every Great Ape Movie, Ranked Worst to Best, go here.)