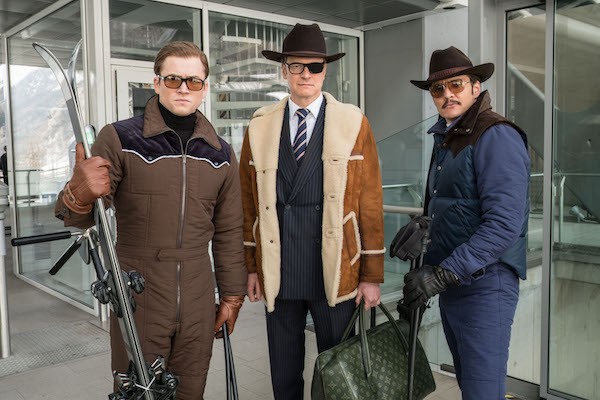 Hitting stateside theaters in February of ’15, Kingsman: The Secret Service proved to be an utter delight — a brainy, brawny, spy-game endeavor packed with memorable characters and nifty plot pirouettes. A sequel was guaranteed, but while Kingsman: The Golden Circle is bigger, it most assuredly isn’t better. Such a precipitous drop in quality would suggest that other hands assembled this follow-up, but that shockingly isn’t the case; instead, this one finds writer-director Matthew Vaughn and co-scripter Jane Goldman again at the controls.

Kingsman agents Eggsy (Taron Egerton) and Merlin (Mark Strong) are back, this time using their smarts to attempt to foil the nefarious plans of Poppy (Julianne Moore, sorry to say), a drug kingpin who’s basically a cross between a ruthless CEO and June Cleaver. Not unlike SPECTRE in the Daniel Craig 007 entries, Poppy has managed to cripple the entire Kingsman operation, thereby forcing the dapper Brits to seek help from their American counterparts. These would be the Statesman, whose members include head honcho Champ (Jeff Bridges), bad boy Tequila (Channing Tatum), mousy Ginger (Halle Berry) and cocky Whiskey (Pedro Pascal).

Serving up an American counterpart to the veddy British Kingsman sounds like a great idea that can’t miss, but with the possible exception of Tatum (who, despite the prominent billing, is barely in this thing), these characters prove to be so underdeveloped and uninteresting that it becomes clear they were added not out of inspiration but out of a scheme to garner more merchandising tie-ins on this side of the Atlantic.

Given his top billing and prominence in the ads, it’s no spoiler to reveal that Colin Firth is back, even though his character of Harry Hart was apparently killed in the first picture. But Harry is so ill-utilized in this new film that it barely seems like it was worth the effort to bring him back. As for the fates of select other characters – well, I want to avoid any giveaways, but let’s just say that this enterprise has the taint of Hicks and Newt about it. These bits are jarring, disruptive, ill-advised and more than a little distasteful.

To be clear, there are bright moments to be found throughout Kingsman: The Golden Circle, including the appearance of Elton John as himself. But even Elton’s participation eventually suffers from overkill, a condition endemic of the entire project. Clever moments from the first film are restaged here, to diminishing returns. The employment of CGI is suffocating, from the snarling mechanical dogs (is this an unofficial sequel to C.H.O.M.P.S.?) to fembots that seem to be distant cousins of the ones from the 70s debacle Sgt. Pepper’s Lonely Hearts Club Band. And while Kingsman: The Secret Service managed to tame its mean-spiritedness with its empathy toward its characters, no such failsafes are in place here, resulting in a motion picture that’s often as ugly as it is excessive.