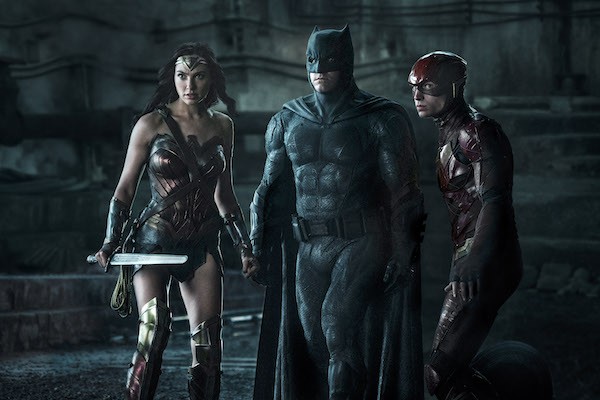 Look! Up on the screen! It’s a mirage! It’s an apparition! It’s Wonder Woman!

Certainly, after the three-and-out represented by Man of Steel, Batman v Superman: Dawn of Justice, and Suicide Squad, the arrival of this past summer’s Wonder Woman was nothing short of a miracle. The solo starring vehicle for the Amazonian warrior princess clicked on all cylinders, and it appeared that DC had finally turned the corner and would begin producing superhero sagas as acclaimed and as beloved as those emanating from the Marvel warehouse.

But if Justice League makes anything clear, it’s that Wonder Woman was an illusion, a cinematic sleight of hand, and the celluloid equivalent of a stopped clock being right twice a day. Justice League defaults to the problems that have plagued the DCEU films pre-WW, and while it offers more pleasures than its detractors would ever admit, it still qualifies as yet another big-screen disappointment from The House That Clark Built.

A constant problem in all the DCEU titles (even Wonder Woman) has been the lack of a truly great villain, and that debit continues with this picture. Steppenwolf (voiced by Ciaran Hinds) is the latest baddie du jour, a towering CGI entity plotting to conquer Earth with the aid of demonic insects. Naturally, such a threat couldn’t be handled by just one hero, so Batman/Bruce Wayne (Ben Affleck) and Diana Prince/Wonder Woman (Gal Gadot) assemble a crime-fighting outfit whose members also include Barry Allen/The Flash (Ezra Miller), Arthur Curry/Aquaman (Jason Momoa) and Victor Stone/Cyborg (Ray Fisher). As expected, Superman (Henry Cavill) returns from the dead, although he’s inexplicably something of a combative tool when initially revived. But after Batman whispers “Martha” to him, he’s just fine. (OK, the scene actually plays out with Superman smacking around the other heroes, but this alternate approach would have made just as much sense and saved the producers several million bucks in the process.)

As with Suicide Squad, the high volume of colorfully costumed characters provides variety but not depth. The broad strokes applied by scripters Chris Terrio and Josh Whedon work in spurts, often dependent on the performance of the actor in question. Of the newbies, Miller comes off best, offering the only humor in the film that doesn’t come off as hopelessly forced. Momoa’s Aquaman functions better as eye candy than as an interesting personality, while Fisher’s Cyborg makes even less of an impression. Cavill is typically dull as Superman, and while Affleck is again fine as Bruce Wayne, his bulky Batman outfit is distracting, making him look less like the Dark Knight and more like somebody’s drunk uncle who reluctantly dressed up to amuse the neighborhood kids at Halloween. Thus, Gadot again ends up as a saving grace, and she also figures at the center of one of the few action sequences (a bank robbery) that’s exciting rather than cumbersome.

Indeed, much of the film feels heavy and unwieldy, from the FX set-pieces to the cluttered storyline to the overall aesthetic design of the picture. Gadot, Miller, and some of the character interactions in the early going provide enormous lift, but as it stands, Justice League ultimately registers as an also-ran in the ongoing superhero sweepstakes.