Jeff Jackson takes the title of his new novel, Destroy All Monsters from the greatest — and noisiest — band you never heard of. Destroy All Monsters was a collection of Detroit visual artists turned art-rockers, who in turn stole their moniker from a 1968 Japanese monster movie starring Godzilla.

"I like pulling the connotations of the Godzilla movie [for the book], the battle of the monsters," says Jackson, who lists playwright, artist and musician on his resume along with novelist. "It's appropriate for right now, [because] there is no shortage of monsters roaming the landscape."

The novel, which is the focus of a book launch party at Goodyear Arts on Oct. 19, follows a group of young fans and fledgling bands trying to make sense of an epidemic of killings sweeping the music scene. Bands are getting slaughtered on stage for no reason, rhyme or motive.

Like an old-school vinyl single, Jackson's tome is split into two sides. Side A is the fleshed-out novel, documenting a young woman and her friends' obsession with the killings. Flip the book over, and you'll find the novella My Dark Ages. Named after a proto-punk single by Cleveland noise terrorists Pere Ubu, Jackson's B-side reads like a radical remix of Destroy All Monsters.

"It comes from the idea that the A-side is the catchier tune and the B-side is where you put the odder track," Jackson says explaining the book's structure. "The B-side is a deepening of the story of the A-side, and it dramatizes events that are only mentioned in the A-side." The book's flip side also depicts an alternate reality where the characters from the A-side have radically different roles, he continues.

"Together I think the A and B sides create something that is greater than either of the sections alone," Jackson concludes.

Creative Loafing: When did you get the idea for Destroy All Monsters?

Jackson: My notes for it go back over 10 years. It started with the image of a shooting in a small rock club. It felt very fantastic and heightened. It's alarming how that scenario is no longer so bizarre. Reality has caught up with that image.

On the subject of reality catching up with your fiction, you are also in a band now.

It's very strange. I didn't get involved in the band until after the book was written, and I never wrote the book with the idea of ever being in a band. When the book was finished, my friend Jeremy Fisher asked me and local poet Amy Bagwell if we would write lyrics to some of his music. So I started coming up with possible melodies and Jeremy and I started creating songs. That's how I got involved in this band Julian Calendar. It feels like it happened in defiance of what I wrote.

Can you talk about the book's relationship with rock music?

The book is a dark love letter to rock 'n' roll. There is still a lot of great music being made today, but music isn't able to move the cultural needle the way it used to in decades past. Great music doesn't mean what it used to mean. It feels like there's a lot less at stake for musicians because it's so hard to make a living with our digital culture, and it's so hard to get noticed.

For fans what's missing is that cultural spark that creates a sense of community and identity for people around music. Some of my characters are powered by feeling that lack, wanting the music to mean more than it does now.

Your prose captures the rhythms of punk rock and experimental rock.

Yes, the musical quality of everything is important to me, whether I'm writing about rock 'n' roll or something else. I was concerned with the sound of the sentences, the clipped quality of the language, also the rhythms of how text in the chapters moves — how you move between sections. I worked a long time on it to get the right feel. 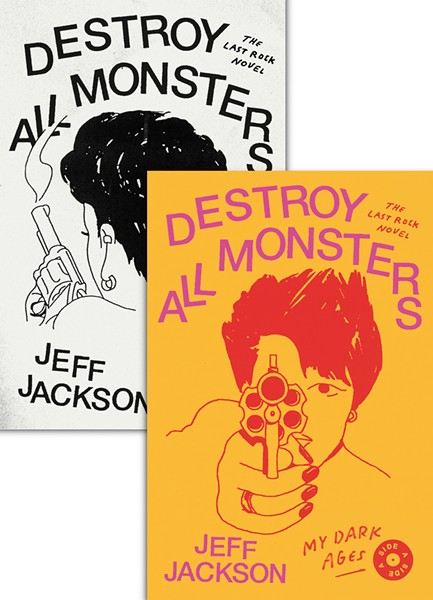 I was thinking about the Velvet Underground, where Lou Reed talked about wanting to build those songs so they would live beyond the present. He was careful about stripping out things that he thought would date them.

That was in my mind – stripping out things that felt extraneous and trying to touch on contemporary issue without writing a manifesto of the Internet and streaming culture.

Can you talk about the violence in the book? Are we at the point where some people see violence as a creative act or a bid for celebrity?

One of the ideas that is thrown around is how to make music matter again. There is the old punk idea that you wipe the cultural slate clean to get to year zero, which was really effective in punk. But it feels like we're at the point where it's impossible to do that now.

Instead you see this violent culling happening in the book.

Some of the characters think that it's in some way analogous to punk's year zero. It's a horrifying idea, and hopefully it's horrifying within the novel. The violence is meant to be heightened. I'm not trying to write a sociological look at gun violence in America. It's alarming that current events have caught up to the book, and I'm worried that for readers approaching it now, it feels a bit more realist than I ever intended.

Is it fair to say the book is about more than music and art? Is there a broader picture here?

I'm using music to talk about something that artists across all genres are facing – What does it look like to create meaningful art in a world where it's difficult to tell the signal from the noise? How do you create stakes for your own work when it feels like no one is listening? Or you put it out there and two weeks later it's gone?

The book isn't providing answers, but hopefully it is deepening the questions and bringing them into sharper focus.