Got a bad rap

In the rap game, it's not uncommon for some rival crew to show up on television or social media calling you and your boys out, saying you're not what you say you are. When that crew is the Charlotte-Mecklenburg Police Department, things get real.

That's the position that JayWay Sosa and the rest of his ICEE Money Entertainment team found themselves in four months ago when CMPD called a press conference to announce charges against 18 men from Hidden Valley who they say were running a drug ring.

At the press conference, Capt. Rob Dance specifically claimed that ICEE Money Entertainment, a record label Sosa helped found in 2013 alongside his friend and one of the April arrestees Wendell "Face" McClain, is a front for organized crime. Capt. Dance referred to the group as "the remnants" of the infamous Hidden Valley Kings street gang.

This was nothing new; an affidavit from 2013 justifying an injunction prohibiting suspected members of the Kings from hanging out together in Charlotte made similar accusations. That injunction has since expired — inspiring an ICEE Money mixtape titled The Injunction — and members have continued to make music. The heat doesn't seem to affect Sosa.

"It makes it difficult just from the standpoint that you're expected to be doing something wrong, but it doesn't make it difficult for us to be out here and shine," Sosa says. "That's just me. I like that attention. Because when it comes down to it, that's just spreading our name around, they're going to let people know who we are who don't know us."

Since he released his latest mixtape God Speed in March, plenty more people than just the police are aware of who JayWay Sosa is. He has spent the last half-year touring the country, hitting spots from Los Angeles to Chicago to Boston.

The mixtape includes features from big names like Kevin Gates and Lil' Boosie, but Sosa's flow, switching from melodic to hard at any given moment, carries the 17 tracks on its own. 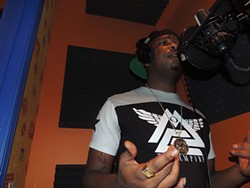 Creative Loafing caught up with Sosa during a recent recording session at Queen City Basement, a studio on Monroe Road where he records with his crew sometimes. He had just returned from a short tour of Florida and was preparing for an upcoming tour of the Carolinas, one of many quick, regional tours he's been doing to push God Speed to new audiences before returning home to work on new material.

While he's constantly making new stuff — he was in the Basement until 5 a.m. the night before we met back at the same spot — he's not yet done with God Speed or the tape's biggest single, "Shit Together." He's preparing to start a new push for radio spins and publicity for the single, while also releasing a couple more videos he's shot to add to the previously released "Believe" and "Side Chick."

His newer work has been hititng the streets as well, if you know where to look. Sosa was recently featured alongside Tigo B on "Dope," a single from the formerly Charlotte-based duo Styles & Complete. DJ Complete, who still splits his time between Charlotte and L.A., was introduced to Sosa and Tigo B through DJ E. Sudds, known for his work with 2 Chainz.

"[E. Sudds] has been helping me out with connections in the rap world. He was in town and was like, 'I'm going to come pick you up and we'll go to this studio to meet these two rappers.' I had never heard of either one of them, but I looked them up and was like, 'Yeah they're dope,' so I played them a bunch of beats."

DJ Complete hesitated to even play the beat that became "Dope," because he couldn't imagine anyone being able to tame such a hype beat with the right flow.

"I didn't expect much out of this beat because it's such a different beat, you have to rap a specific way; in triplets," Complete says. "I never expected any rapper to really fuck with it. But they got super hype and went in there. The song happened in like an hour."

They worked on one more song that's still in production and Complete still sends Sosa beats regularly, now calling him one of his favorite rappers to work with.

"He's just a real, regular dude; a humble dude. He's a real positive guy," Complete says. "He's talented. He has a unique voice that stands out and it just sounds big. It's a unique flow. It's not like he's trying to copy anybody."

It's that "positive guy" who sometimes gets lost in all the media hype surrounding Hidden Valley and the gang that once controlled it. While Sosa said he doesn't mind the police attention, it irks him that the media doesn't give the same attention to the positive things he's done.

In August 2015, Sosa and the rest of ICEE Money teamed with Touch of Precision Barber Lounge to hold a back-to-school drive for students in need. About 400 kids left the event with new backpacks filled with supplies to help them through their school year.

"Even [the CMPD] taunt us by our name but when people take the time to actually see what we are doing, they see that we've had those bookbag drives and those school drives — all those different times that we are in the community," Sosa says. "I've been going to different schools with [Streetz 103.3 radio personality] Mario the Mic Man to let them know that we want you to do the right thing. I just want that stuff to be looked at, as well."

Creative Loafing was there in October of last year when Sosa performed at a "Males in Education" event at Bruns Academy hosted by Profound Genetlemen and Hip Hop University. He performed a couple songs and then looked on as one of the students got on stage to freestyle about his grades and wanting to play football. Sosa was mobbed on stage when he offered to take a picture with all the students in attendance near the end of the day.

It was one of multiple schools he's visited over the last year to spread a message about being a force for positive change, no matter the circumstances one has come up under.

He approaches his music similarly to youth efforts like the ones mentioned above. ICEE Money members may hold a cookout on any given summer day and hand out food to anyone from the neighborhood, or host a "Street N Greet" in place of a regular Charlotte tour stop, as he'll do on August 10 at Queen City Basement, allowing fans and other rappers to come through just to hang.

With these efforts, he hopes to build on the hard work he's put into his music to continue to help grow both the community and the Charlotte rap scene.

"It's simple, but it's all structure; you add structure to the community," he says. "So when you do things like that and make people feel good about coming together, it shouldn't be that hard to make it happen again."