At first glance, it's a city at dusk on a Mediterranean coast. Boats dot the bay, lights reflecting off water, and the city responds with its own light show. It's another beautiful evening on the Sorrentine Peninsula.

But look closer. The boats are actually miniature cities.

Buildings and rooftops house an unknown population of people who live their lives on the water. Barges have slipped into the harbor and are anchored before a city that rises up a mountain, twisting and spiraling into an indigo night with its own dream-like logic. The people in this city are not seen, but they're very much a part of this scene. 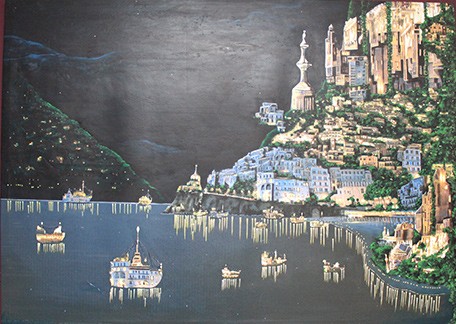 Magic and mystery hide in the womb of the urban landscapes of the world. At least, in Jay Robert Watson's world.

Watson, 36, currently lives in Charlotte after spending some time in the strobe-lit Miami art scene, where he honed the technique and vision he's cultivated since childhood, in which he depicts an inner urban world of startling detail with a variety of media and found objects. Born in Boston and raised in Hilton Head, South Carolina, he returned to the Carolinas to be closer to family.

"Amalfi Coast: Dream Harbour" (2016), the piece described above, is one of many surreal city skylines Watson has put to canvas. Hong Kong, Moscow and New York have also been refracted through Watson's lens, allowing the fantastical rhythm of those cities to emerge.

They are recognizable, but upon closer inspection, Watson reveals amazing distortions of time and color, drawing viewers into an elaborate inner mythology that allies the artist with the dreamscapes of Cuban painter Vicente Hernández.

Watson's works, along with his city barge sculptures — 3-D pieces in wood and mixed media, will be on display at Magnolia Emporium, at 307 Lincoln Street on Friday, March 2, from 6 to 9 p.m. We sat down with Watson in his home in the Cotswold neighborhood, where he lives with his wife, Ilsis Venezuelana, a local jewelry artisan.

Creative Loafing: You're not just working in one kind of paint or style. Every work contains at least two or three different types of media, like a collage. Can you tell us a little about your process?

Jay Robert Watson: The mediums are basically all kinds of paint, plus all kinds of found objects in various stages of development. I like to put fake crystals in there, lots of metallic vinyl, so that wherever you're standing, it's a different focal point. Acrylics, airbrush, finger paint, there's no real exact technique as long as I get the same feel from each one of them. The series has to have some continuity to it, so it doesn't matter how I get the look, as long as I have the look. [laughs] Does that make sense?

Sure. What is it about the vitality and movement of cities that's captured your imagination in this way?

Well, that's what a city is. Vibrant, of course, because of all the colors and the architecture, but also I'd say it's "on" or even "alive." You can see lights coming on, or maybe a plane goes flying overhead; boats in the bay.

I mean, there's just so much happening that even if you're not in the city but just looking at the city from a distance, you know life is happening. People are making moves, having good times and bad times. You're watching a whole world. It's like looking at a snow globe. You're holding this tiny city, but you look closer and you feel like you're in there.

Your fascination with towns and cities has a childlike sense of wonder that comes out in surrealism. Did your childhood have a lot of these magic urban scenes?

When I was a kid I used to love my mom's Christmas village that she would put up on the mantle. She'd never let me touch it because I was a kid and broke stuff all the time [laughs], but I would always look at them and imagine the whole town, you know? You could just see people doing stuff.

My dad and I built a model train scene when I was really young, still up in Massachusetts, so I wasn't even 8 years old. We took a part of the garage and put up a couple sheets of plywood, and built the biggest train set — at least I thought was the biggest one ever built, you know, being a little kid. There were so many little pieces to the scene, that the story, it never changes, but it's always adding elements. So when you're standing here, you look in that direction and you see another story. It's just adding to what you were already thinking about.

It's watching a movie that never ends. When you turn away from it, it turns off, in a way, but when you look at it again, you pick it right back up.

You've mentioned the "stories" in your paintings before. There's an inner world going on here that the viewer can dial into. Can you talk a little about those stories you're seeing, and your efforts to depict them?

I like to read a lot, and I always feel disappointed when the story's over. You can read the book again but, it's kind of done. So you set out to create your own stories, and that's what I wanted to do with these paintings, that would draw you in but, depending on the angle you're standing at or whatever lighting you're in, it changes the mood.

When I was a kid I would look at anything and think it's huge. So now, as an adult, making art makes me feel like a little kid again. I tend to make things big and exaggerated and over the top. So now this boat has its own group of buildings, its own skyscrapers, so it's a little world, within this big world, and that adds so much to the story for me.

The idea here is that cities are so densely populated, that eventually they're moving into the oceans. It's something I always think about as we continue to abuse our natural resources. Global changes happening — what are our options, provided we don't go into outer space or something? I picture humans moving into the oceans. So now you have this huge barge with a city on it, which just moves around the world. All the buildings are distorted in one way or another. I like the idea that from a distance it has a classic feel to it, and people can look at it as simply the place, but I want people with creative minds to get lost in it.

What can folks expect from "An Evening of Art With Jay Robert Watson"?

Randolph James [owner of the Magnolia Emporium] has been kind enough to show my work there, and represent me. I have a limited amount of space, so the show will allow me to display my larger, two-dimensional pieces and the three-dimensional boat sculptures. [That] will add another element to each story. A lot of the boats match the paintings, so you'll actually see one of these boats magnified.

What are your plans going forward?

You don't want to overplan it, because you'll feel different tomorrow. I'll paint for two weeks and not finish it, and then see a piece of wood and turn it into something. It's about keeping the story open. They get so elaborate. They bring me so much joy, I wish I never had to sell a piece. I'd like to keep them all. These stories are never ending for me. People ask, "Why are these so expensive?" and I'm like, "You're not just gonna take these out of my hands..." I never want the stories to end.