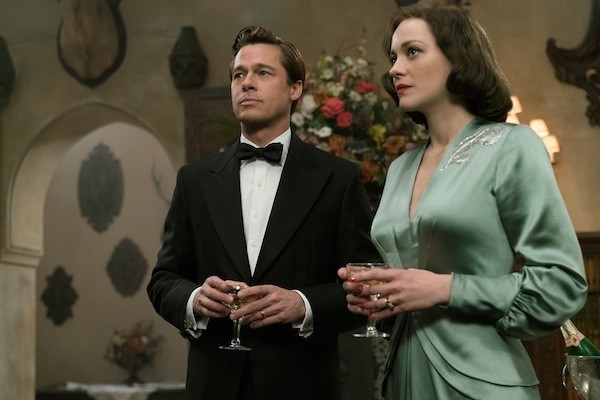 ALLIED (2016). Once the bread and butter of the movie industry, the World War II film has become a rarity in today's Hollywood, tragically going the way of the dodo and the Western. Allied attempts to bring back some of that old-school glamor and intrigue, placing a moving love story at the center of a wartime espionage caper. The result is itself a rarity: an elegant and understated movie for adults, one that's as unfussy as it is engaging. Naturally, it was a box office underachiever, costing $85 million but grossing only $40 million stateside. Brad Pitt, no stranger to tangling with Nazis (starring in Inglourious Basterds and Fury, speaking out against Donald Trump), here plays Max Vatan, a Canadian intelligence officer whose latest mission pairs him with French Resistance fighter Marianne Beauséjour (Marion Cotillard). Their assignment involves posing as man and wife while plotting the assassination of an important German dignitary; perhaps inevitably, they end up falling in love and getting married, a union that turns problematic once Marianne is suspected by the British high command of being an enemy agent. Far too many movies relying on a big reveal play their hands too soon, but that's not the case with Allied: Thanks to Steven Knight's smart screenplay and Robert Zemeckis' understated direction, the picture keeps the is-she-or-isn't-she? guessing game percolating until the end. Also crucial to the story's effectiveness are the performances by Pitt and Cotillard, making the mutual attraction and admiration between their characters palpable.

Blu-ray extras consist of a generous amount of making-of featurettes, examining the story, the cast, the production design, the costumes (Joanna Johnston earned the film’s sole Oscar nomination, for Best Costume Design), the music, and more.

EDGE OF ETERNITY (1959). Movies that include a scene set inside – and often atop – a cable car (Moonraker, Nighthawks, Night Train to Munich, and, best of the best, Where Eagles Dare) generally deliver an audience spike in adrenaline dependent on one’s acrophobia, and Edge of Eternity is no exception. The pictures climaxes with such a scenario, but before reaching that point, it has already established itself as an engrossing drama enhanced by its Grand Canyon location shooting. Directed by the reliable Don Siegel (Dirty Harry, the ’56 Invasion of the Body Snatchers), the film finds Deputy Les Martin (Cornel Wilde) investigating the murder of a stranger whose identity can’t be ascertained. His boss (Edgar Buchanan) believes in his sleuthing skills, but since election time is approaching, other politicos bring up his tortured past – nevertheless, Les presses on with his investigation, receiving some unlikely help from the daughter (Victoria Shaw) of the local mining tycoon (Alexander Lockwood). The fact that the identity of the primary villain is meant to be a shocking surprise means that it’s neither shocking nor surprising, but even this obviousness can’t detract from the pleasures offered by the rest of this tough thriller. The great character actor Jack Elam, usually cast as villains or kooks, is here allowed to play a regular guy, the foreman at the mining site. 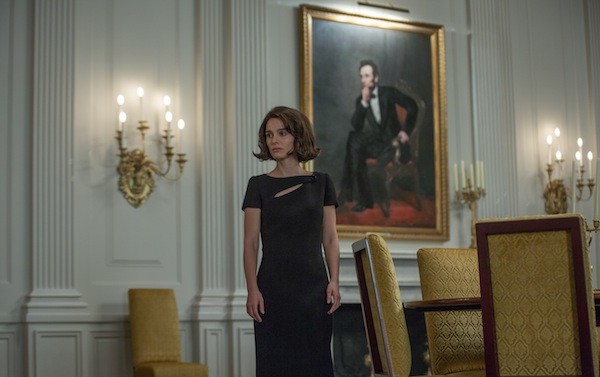 JACKIE (2016). That Natalie Portman delivers a tremendous performance as Jacqueline Kennedy in Jackie is to be expected. What's less certain is if the movie surrounding her will be a tediously respectful biopic, a factually challenged piece of fiction, or a movie that moves to its own beat without ever taking its eye off the ball. Happily, it's the third option, with director Pablo Larraín and writer Noah Oppenheim employing a choppy structure that actually benefits the film. With an interview with a reporter (Billy Crudup) serving as anchor scenes, the rest largely recalls that awful period when the First Lady lost her husband — and the nation lost its leader — on that fateful November day in Dallas. The picture synchronizes with her dazed rhythm, and we catch glimpses of Bobby Kennedy (Peter Sarsgaard) sharing in the grief, Lyndon B. Johnson (John Carroll Lynch) maneuvering in the background, and the pre-MPAA Jack Valenti (Max Casella) being typically weaselly. Jackie makes no pretense at being a comprehensive biography — instead, it's more like a few carefully selected pages from a bestselling tome, enough to whet the appetite without completely satisfying it. Jackie was never able to bust out of its perceived art-house niche (costing $9 million, it earned $13 million), although it managed to land a trio of Academy Award nominations: Best Original Score, Best Costume Design, and, of course, Best Actress.

Blu-ray extras include a behind-the-scenes featurette and a photo gallery. There’s also audio commentary by Portman and Larraín; oddly (and unfortunately), that’s only available via the Digital HD, not the Blu-ray or DVD.

THE KLANSMAN (1974). One scene in The Klansman features a black male being castrated and then repeatedly shot by slobbering rednecks; another shows (in far more explicit detail) a black female getting raped by a Southern hayseed. Scenes like these undoubtedly make The Klansman a favorite viewing option in the Trump-Bannon White House, but everyone else will be properly repulsed by this utterly repellent melodrama – arguably the low point in the career of director Terence Young (helmer of three of the first four James Bond films, including Dr. No). Co-written by Samuel Fuller (who was also supposed to direct until script revisions angered him to the point where he left the project), the picture positions as its heroes an apolitical Alabama sheriff (Lee Marvin) and an ineffectual liberal landowner (Richard Burton). Racial tensions are already elevated in this Southern cesspool of a town, but matters become even more pronounced after a white woman (Dynasty’s Linda Evans) gets raped by a black man. Marvin and especially Burton were drunk throughout filming, which explains their atypically lousy performances – also on hand, and faring just as poorly without the benefit of booze, are Cameron Mitchell as a particularly vile cracker named Cutt Butt and O.J. Simpson as a vigilante who executes Klansmen every chance he gets. Morally muddled and shameless in its exploitative tactics, The Klansman doesn’t end so much as puts itself out of its own misery.

MOANA (2016). Better than Finding Dory but not quite reaching the level of Zootopia, Disney’s other animated smash from 2016 is a rollicking yarn centered on a young lass (voiced by Auli'i Cravalho) coming of age on a South Pacific island. Enjoying a special rapport with the ocean, she finally defies her overprotective father's orders and sets sail with the intention of finding the Heart of Te Fiti, a bauble swiped from an island goddess by the boisterous and self-satisfied demigod Maui (Dwayne Johnson). Requiring the return of the stone to save her endangered island, she eventually crosses paths with Maui, and the pair constantly bicker as they embark on a series of adventures. Full of energetic incident, backed by a score co-written by Hamilton's Lin-Manuel Miranda, and imbued with a respect for South Pacific customs and cultures, Moana hits all the right grace notes with such efficiency that it's easy to overlook the fact that the lead is once again a plucky and intelligent heroine who absorbs valuable life lessons, the sidekick is once again a garrulous and talkative overachiever, and the comic relief is once again provided by an animal (in this case, a brain-damaged chicken). But why fight it when the results are this charming? This earned a pair of Oscar nominations for Best Animated Feature and Best Original Song (“How Far I’ll Go”). 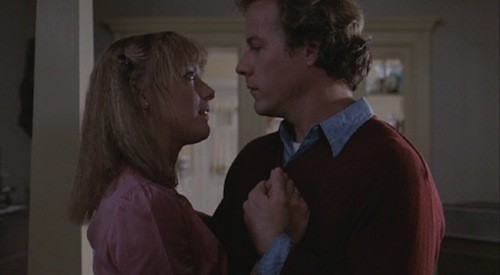 CHILLY SCENES OF WINTER (1979). Not many flops are given a second chance at scoring with audiences, but that was the case with the film adaptation of Ann Beattie’s Chilly Scenes of Winter. Released in 1979 under the title Head Over Heels (a moniker described by film historian Danny Peary as more “ideal for an X-rated cheerleader movie”), writer-director Joan Micklin Silver’s offbeat tale of an eccentric guy (John Heard) pining over his ex-girlfriend (Mary Beth Hurt) failed to draw attention. But thanks to its persistent makers — as well as the decision to lop off its happy ending – the film became an art-house hit when it was re-released in 1982 under the novel’s title. Heard and Hurt are terrific in the central roles, and look for support from two National Lampoon’s Animal House alumni: Peter Riegert (Boon) as Heard’s best friend and Mark Metcalf (Neidermeyer) as Hurt’s estranged husband.

Blu-ray extras consist of audio commentary by Silver and producer Amy Robinson; the theatrical trailer; and an isolated track of Ken Lauber’s score.

WOMEN ON THE VERGE OF A NERVOUS BREAKDOWN (1988). Spanish writer-director Pedro Almodóvar had already been making movies for a decade before he experienced his international breakthrough with this infectious confection about an actress (Carmen Maura) whose life takes some unexpected turns after her suave lover (Fernando Guillen) unexpectedly dumps her. This Oscar nominee for Best Foreign Language Film is known for its madcap plotting and roster of eccentric characters (including ones played by Almodóvar regulars Antonio Banderas and Rossy de Palma), yet it’s the vibrant color schemes that primarily stick in the mind.

Blu-ray extras include interviews with Almodóvar, Maura, and executive producer (and Pedro’s brother) Agustin Almodóvar; a discussion of the movie by film scholar Richard Pena; and the theatrical trailer.

HEATHERS (1989). "Dear diary: My teen angst bullshit now has a body count." "This is Ohio. I mean, if you don't have a brewski in your hand, you might as well be wearing a dress." "Football season's over, Veronica. Kurt and Ram had nothing left to offer the school except for date rapes and AIDS jokes." "When teenagers complain that they want to be treated like human beings, it's usually because they are being treated like human beings." With classic quips like these, is it any wonder Heathers has long been regarded as one of the best high school movies ever made? Even in this age of school shootings, Heathers' reputation has largely remained unscathed, undoubtedly because its marination in the juices of pitch-black comedy have given it an air of surrealism far removed from any real-life tragedies. Winona Ryder stars as Veronica, a popular girl who's growing tired of the shallow, cruel antics of the three other members of her clique, all named Heather (Shannen Doherty, Lisanne Falk and Kim Walker). Veronica ends up dating J.D. (Christian Slater), the new kid in town, only to slowly learn that he's making sure the "harmless" gags they pull on their insufferable classmates are in fact sadistic pranks resulting in death. Director Michael Lehmann and scripter Daniel Waters maintain the proper degree of dark humor throughout the picture, and while the superb Ryder would go on to deliver even better performances in such films as Little Women and The Age of Innocence, this remains the high point of Slater's big-screen career. (Netflix Streaming)