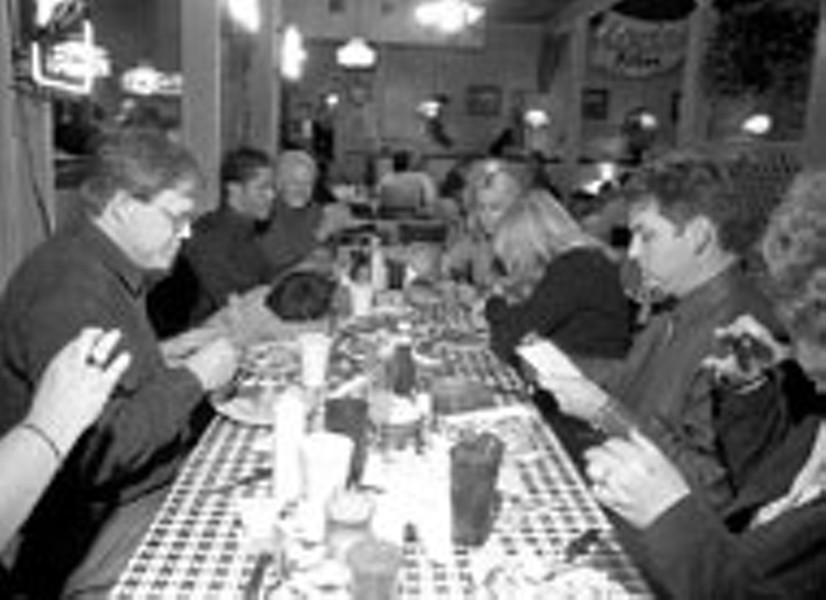 Radok FISH FARM Longtime Matthews restaurant offers more than traditional fried fish and hush puppies
In 1975, the Eagles' One of These Nights, Springsteen's Born to Run and The Hustle by Van McCoy played on radios. The war in Vietnam ended; Wall Street's fixed commissions were eliminated; and the pivotal phrase from Jaws, "We're going to need a bigger boat" was known to all. Charlotte country clubs, with selective memberships and coat and tie requirements, were where people went for "fine dining," since liquor-by-the-drink had not been approved. Also in 1975, Claude Savage was the head football coach at Myers Park High School. That year the Matthews Dinner Theater, a large red barn on Sam Newell Road, a rural road 12 miles southeast of downtown Charlotte, came up for sale. Savage says, "What happened was the actors had joined the unions and the owners couldn't afford the quality of the actors and actresses. So they sold it. The building was originally built, I guess about five years before that, to look like a barn, but it has always been a restaurant. When it was a dinner theater, the buffet was in the center of the room and the tables were located on all sides, some elevated. Then they would take the buffet off and set up the stage and the play would start. The upstairs was the dressing rooms."

In 1975, Savage and his wife Jean bought the barn and the surrounding three and one half acres and opened a fish camp. As they pondered naming their new restaurant, they decided that since the barn looked like a steak restaurant they had better use the word fish prominently. They settled on Fish Farm. Soon they were serving traditional fish camp fare.

If you're wondering what a fish camp is, chances are you didn't grow up near the Catawba River. There local fisherman fried their catch in old wash pots filled with lard and sold them to the public. Some fishermen added metal roofs over the frying pots and soon the concept caught on.

In 1980, Savage retired from his coaching position and bought another dinner theater in Pineville, which he also opened as a restaurant. That building has since been sold and demolished to make way for fast food franchises. During the rest of the 80s, Savage owned or was a co-owner of a dozen or more area restaurants. But the one which gave him the least worries was his first, the Fish Farm in Matthews. Savage credits that to his exceptional staff. His manager Dottie Conrad has been there since the first day. Notes Savage, "Matthews is the only restaurant I ever owned that has never been a problem. It's been a kind of blessing."

But times have changed since the Fish Farm opened in 1975. Sam Newell Road is no longer rural. Five shopping centers, a middle school, dozens of restaurants, and a hospital have opened in the surrounding area during the past decade. New housing developments proliferate. Savage has had his share of competitors, too. "Five chain restaurants serving fish have opened near here," he says.

Why the change? "It was needed. People today want more variety and that's what we're giving them. Some people want steak, or ribs, or soup and salad. People might not want to eat seafood every night," says Savage.

The parking lot of the 300-seat Fish Farm is gravel and still has a rural feel. The dining room is incredibly calming with its racing memorabilia, neon signs, and large ceiling fans. Tables are topped with perennial black check vinyl tablecloths and bottles of housemade tarter sauce.

Service is friendly, accommodating, and fast. Soon after ordering, large platters of food arrive. Stacks of thinly battered, not heavily fettered, onion rings are spritzed with lemon to balance the taste. An order of "The Fish Farm Platter" translated into layers of hush puppies, fried shrimp, scallops, oysters, 12 ounces of flounder, catfish, and deviled crab. The best of these were the succulent shellfish, abundantly sweet and enough to get lost in. The peel-and-eat Louisiana shrimp were spicy without burning.

Only two complaints surfaced. The first involved the ill-paired fish and rice combos. With all the fresh vegetables available in Matthews, why was rice chosen to accompany many of the fish dishes? The second note was while the pastry of the peach cobbler was excellent, the filling was too thickly sweet. But these are minor complaints.

While many family-owned indigenous cuisine establishments sold to outsiders, went bankrupt when challenged by national chains, or closed due to lack of family interest, the Fish Farm hasn't. "We are home grown and family owned and have survived a lot," Savage observes. Savage has survived because he learned early that restaurants need to reinvent themselves or risk growing stale. To be in the restaurant business for 26 years is saying a lot. Only a handful of Charlotte restaurants have been able to achieve this. There are no plucky waiters nor daring menus. The Fish Farm dallies with Charlotte's cuisine history, but has moved into 2001 and remains a place to drop by and be nourished by the scene.