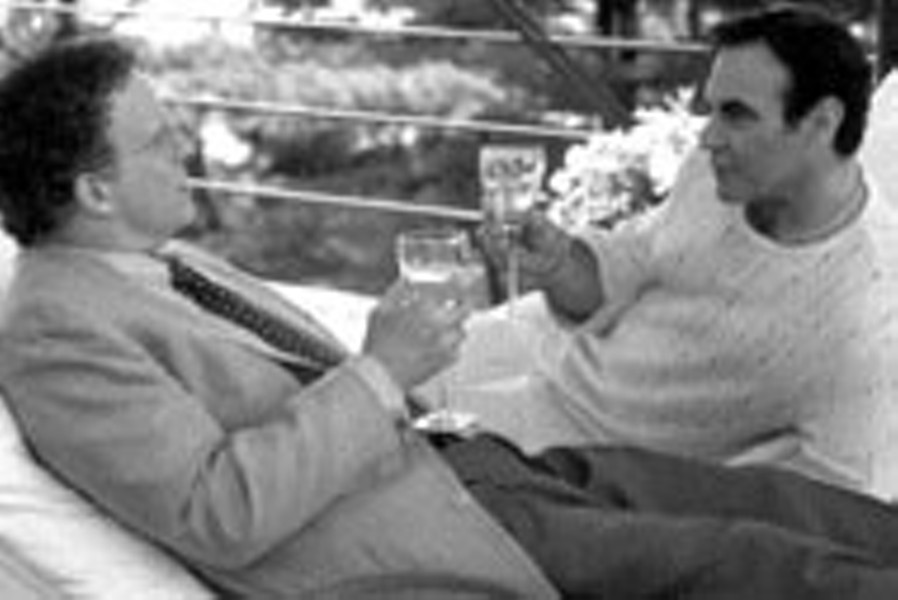 George Krayckyk/Warner Bros COMPROMISING POSITION David Suchet (right) puts the moves on Albert Brooks in The In-Laws
While certainly no classic, The In-Laws is an enjoyable comedy that includes among its attributes a clever premise, a witty script that's packed with choice dialogue, two beautifully matched lead actors, and a supporting performer who makes off with the picture like a Bechtel bandit in the night.But enough about the 1979 version.

The new In-Laws, released just in time to (hopefully) emerge as the first box office casualty of the 2003 summer season, is a sorry excuse for a comedy, a movie that completely disregards all the elements that made its predecessor such a delight. It's this summer's version of last June's Bad Company, which took two mismatched stars (Anthony Hopkins and Chris Rock) and shoehorned them into a deadening action-comedy hybrid that was neither exciting nor funny. That's the game plan here as well, with Michael Douglas and Albert Brooks tossed into a jokey espionage flick that leaves them as trapped and immobile as a beached whale.

In the 1979 version, Alan Arkin starred as a meek dentist who got caught up in the misadventures of his daughter's future father-in-law (Peter Falk), a CIA agent whose reckless behavior placed them in numerous dire predicaments. In this new version, the profession of Brooks' medicine man has been changed to that of podiatrist, presumably so that Brooks can try to squeeze a laugh out of a line involving foot fungus (he fails). The Falk character, now manhandled by Douglas, remains a maverick CIA agent, meaning that the foot doctor gets dragged all over the globe as the ersatz 007 tries to corral international arms smugglers. Along the way, they "borrow" a plane from Barbra Streisand (the movie's only funny bit) and employ the services of KC and the Sunshine Band (who apparently had a choice between appearing in this film or hawking disco albums on a late-night infomercial).

God knows that Brooks can do comedy, and even Douglas has demonstrated a flair for the funny stuff on occasion (most notably in his three pairings with Kathleen Turner). But neither man has much of a fighting chance when confronted with the lame comic bits that screenwriters Nat Mauldin and Ed Solomon cruelly foist upon them. Still, they fare better than the poor schmucks filling out the supporting ranks. David Suchet, whose respectable reputation has always exceeded his actual accomplishments, is a swishy embarrassment as a homosexual arms dealer who spends an exorbitant amount of screen time trying to get Brooks out of his pants so he can admire his "fat cobra" (their words, not mine). Suchet is obviously meant to be this movie's scene stealer extraordinaire, but he's no match for the original's Richard Libertini, who was a hoot as an eccentric Latin American dictator. As the bride and groom, Lindsay Sloane and Ryan Reynolds (who could pass himself off as Jason Lee's younger brother) are so lifeless, they barely register as living organisms. And Candice Bergen's shrill late-inning appearance as Douglas' ex-wife serves as a potent reminder that in her pre-Murphy Brown days, she was considered a rotten actress, so much so that in the book The Golden Turkey Awards, she was one of the four nominees for the title "The Worst Actress of All Time" (for failed movie stars like Bergen and Cybill Shepherd, prime time television truly is the great equalizer). Only Robin Tunney, as Douglas' sharp-witted partner, strives to make something of her role, yet even she's left for dead after Mauldin and Solomon make her the victim of an unfortunate (and nonsensical) plot twist.

Because most modern moviegoers presumably won't be familiar with the '79 model of The In-Laws, the studio is probably hoping that audiences will turn up expecting something along the lines of Father of the Bride (the Steve Martin version) or Meet the Parents, two hit comedies about family affairs. But a joyous wedding celebration isn't what comes to mind while sitting through this morose mess. On the contrary, funeral services begin this Friday at a multiplex near you.