Putting the pedal to the metal, it's full speed ahead for Iron Man 3, the first post-Avengers flick to feature one of that elite outfit's members again operating in single-player game mode.

Jon Favreau, who helmed the first two pictures, has vacated the director's chair, with Shane Black now occupying the seat (Favreau remains attached to the project as an executive producer and in the supporting role of Happy Hogan). Black is best known as the veteran screenwriter of the original Lethal Weapon and made his own directorial debut with 2005's grandly entertaining Kiss Kiss Bang Bang, but despite the swap, there's no discernible difference in his approach and Favreau's: Like Iron Man 2, the movie is generally engaging, occasionally dull, frequently cluttered, and recommended with only the greatest of reservations. And with The Avengers still fresh in everyone's minds, this tin-man outing might seem even more tinny to many prospective viewers.

In a heads-up bit of scripting by Black and Drew Pearce, the picture nicely ties into the plot of The Avengers by presenting Tony Stark (Robert Downey Jr.) as a man who's been humbled (or as humbled as someone like Stark can be) by his close encounters with otherworldly gods, as well as that frightening free-fall from the heavens. These events have caused him to experience frequent anxiety attacks, although it will take much more than that for him to shirk his duties as Iron Man: When a madman named the Mandarin (Ben Kingsley) arrives on the scene and starts destroying American property and endangering American lives (Happy, Stark's erstwhile bodyguard, is one of the potential victims), Stark not only promises to kill the foreign assailant, but even provides his own home address over the airwaves to facilitate their showdown. But the Mandarin isn't the only heavy on the scene. There's also Aldrich Killian (Guy Pearce), a former nerd whose cruel treatment by Stark back on New Year's Eve 1999 fuels his increasingly prominent role in the narrative. Now a wealthy scientist and entrepreneur, he has created a way for his minions to serve as living weapons of mass destruction.

A fellow scientist named Maya Hansen (Rebecca Hall) also shares Killian's theories about bodily regeneration (if not his dastardly machinations), as she likewise views the work as the next step in human evolution (a phrase Black and Pearce gleefully steal almost verbatim from X-Men). Maya is one of Stark's former one-night stands, a fact that has the potential to cause a greater rift between Stark and girlfriend Pepper Potts (Gwyneth Paltrow), who's already upset that her lover spends more time in his lab than he does with her. In addition to his primary suit and the red-white-and-blue one he created for his friend James Rhodes (Don Cheadle) to wear as the military-sanctioned Iron Patriot (originally called War Machine until, as Rhodes amusingly explains, strategists decided that was too aggressive for PR purposes), Stark has also built an entire line of Iron Man suits with the ability to be operated remotely.

The proliferation of the Iron Man armor exemplifies the overkill approach that mars the movie. A startling number of characters don the suits at some point or another, and the result stirs memories of Mission: Impossible II, that franchise weak link in which characters were pulling masks off of themselves and other people at an absurd rate. The abundance of these Iron Mans (or would that be Iron Men?) also helps drain the excitement out of a large-scale battle that grows exceedingly tedious and incoherent. In this regard, Black also mimics Favreau: As evidenced in all three pictures (even the first), neither man is especially adept at shooting gargantuan set-pieces. Contrast this with The Avengers, wherein director Joss Whedon did a spectacular job of delineating spacial relationships, character confrontations and the like. 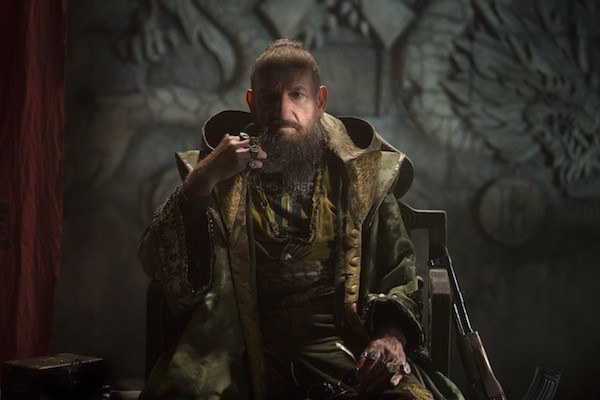 As Stark, Downey still delivers the one-liners with gusto ("I loved you in A Christmas Story," he tells one bespectacled kid), but his chemistry with Paltrow, strong in Part 1 and meh in Part 2, continues its downward slide (maybe he's lost some respect after seeing her Goop). There's potential in his relationship with Hall, but her role is both inconsistent and drastically underwritten. Indeed, Downey's best moments are with his male co-stars: The easy rapport between Stark and Cheadle's Rhodes harkens back to Lethal Weapon's Murtaugh-Riggs banter, while Stark's scenes opposite a helpful young boy in Tennessee (the talented Ty Simpkins, recognizable from his stint as the possessed son in Insidious) provide the picture with most of its heart and humor, as Stark can't help but insult this fatherless lad even as he accepts his much-needed assistance. Pearce does what he can with a threadbare villainous role, while Kingsley emerges as an MVP: His work as the Mandarin is exemplary, but not for the reasons one would expect. ('Nuff said; no spoilers this late in the game.)

Considering The Avengers kicked off the cinematic summer of 2012 in high-flying fashion, there's a palpable sense of letdown with Iron Man 3 serving as this new season's opening salvo. Still, the film does enough right to keep the customers satisfied. In short, the disappointment isn't pronounced enough to elicit rage against the machine, but many discerning viewers will nevertheless feel a twinge of remorse aimed at the man in the iron mask.