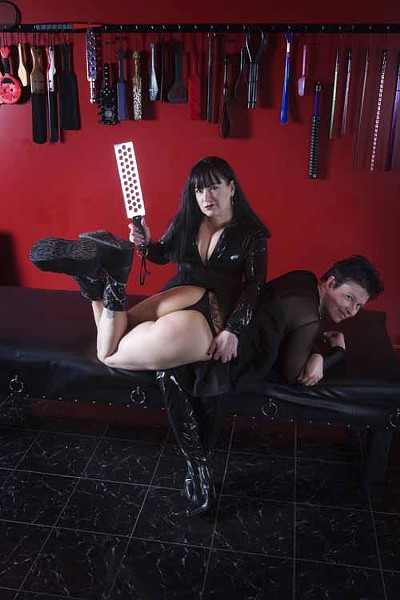 But all sex work isn't illegal ... or just the common stripper dancing on a pole. Some of it builds confidence and some of it brings in a nice chunk of change. Here's a look at a few Charlotteans who make a living by keeping things hot.

The founder of Queen City Dancing Queen teaches women (and some men) sexy moves that you don't need a pole to try at home.

Acosta, who started her business in 2008, says folks who take her classes lose pounds but gain something more. "I have people that will come to class for the first time and they will come to me and be really nervous and apprehensive," she says. "They will say: 'I haven't danced before or I don't dance in public because I'm scared to death of it.' But I'll say: 'It's all right. Just come.' We always say, if you're moving, you're doing it right.

"Gradually, they start getting the moves and they keep on coming," Acosta continues. "So, those same people that were scared to death and started on the back row, they gradually start moving forward in the class. And before I know it, they are jamming on the front row. Yes, people lose weight, but the change that I see is inside of people."

Acosta and her instructors teach class members current dance moves -- as seen on MTV. They've done routines to Lady Gaga's music and Britney Spears. But what Acosta loves to show off is the "booty battle."

"You just shake your ass. We do a lot of butt shaking and a lot of hip rolls," she says. Acosta and her crew took the battle on the road at a Charlotte Roller Girls bout in August and she's got the YouTube video to show how much audiences enjoyed the performance.

Once you leave one of the QCDQ's classes, Acosta says, you can't help but take the moves home with you. She's heard from people who've said they've been cleaning the house and heard a song on the radio from class and their bodies began to move to it.

It's a special added benefit for their significant others.

"Their husbands will just love it and think it's amazing that their wife is doing these moves that they would've never imagined their wife doing. They just eat it up."

Ready for the money shot

Thirty-four-year-old photographer Jeremy Igo knows how to make a woman look and feel good about herself. The first step? He gets her to strip down to her underwear -- and then he starts snapping pictures.

Igo is Charlotte's "boudoir photographer." He runs the aptly named Charlotte Boudoir, where he takes photographs of regular women in their bedroom attire. The shots can be taken at the client's home or at his studio in NoDa.

So, who takes these pictures and why? Igo says that many women pose for themselves.

"The vast majority say it's an ego boost because they see how good they can look in pictures. So, it's uplifting and empowering for them," he says. "If they are doing it for the husbands or the boyfriends, there is always happiness on their end as well. I've gotten cigars and drinks sent to me from husbands and boyfriends."

Igo has been taking these types of photos for about five years, and he's starting to see the trend of boudoir photography catch on in the Queen City.

To take a good boudoir photo, according to Igo, a woman doesn't have to be a certain size or anything like that. "It helps," he suggests, "if they feel good about themselves and are comfortable in their own skin."

And yes, men are welcome, but it's apparently rare that a man comes in alone to take a boudoir photograph.

"It's not as common. Also, couples come in [to get photographed] or the husband will like to attend the photo shoot," he says, "and that's absolutely fine."