In This Corner of the World: Hiroshima, Mon Amour | Reviews | Creative Loafing Charlotte

In This Corner of the World: Hiroshima, Mon Amour

IN THIS CORNER OF THE WORLD
*** (out of four)
DIRECTED BY Sunao Katabuchi
STARS Rena Nounen, Yoshimasa Hosoya 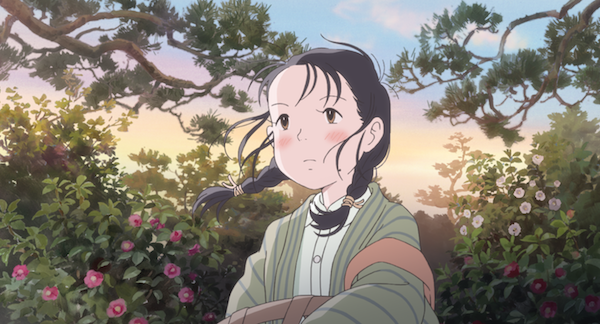 Sparse in its visual style yet weighty with its themes, In This Corner of the World is a Japanese animated feature that largely concerns itself with the bombing of Hiroshima toward the end of World War II. Like many other anime features, this one isn’t exactly for the kids, with a PG-13 rating to allow parents to debate whether it’s a proper viewing option for their offspring. Then again, it can’t be any more detrimental to young minds than something like The Emoji Movie, in which characters named Poop and Poop Jr. run around chanting, “We’re number two!”

There is a split-second shot of an anthropomorphic alligator, but that’s about it for flights of fancy in In This Corner of the World. The story centers on Suzu (voiced by Rena Nounen), an artist and self-described daydreamer who, at the age of 18, marries a young man named Shusaku (Yoshimasa Hosoya) and moves from her home in Hiroshima to his family’s residence in nearby Kure. She more than pulls her weight with the other members of the household, and she particularly bonds with her niece Harumi (Natsuki Inaba). But the war, which initially seems so far away, soon takes its toll in the form of limited food rations and strafing American airplanes. All the while, dates occasionally pop up on the screen to show that we’re inexorably moving closer and closer to August 6, 1945.

Although there are a few moments of Suzu admiring her nation’s weapons of mass destruction (particularly a pair of imposing battleships), In this Corner of the World keeps nationalism on the back burner, preferring instead to examine the effects of war on ordinary citizens. If there are any politics in the picture, it’s of the personal sort, with Suzu doing her best to be accepted by her new husband and the rest of his family. Indeed, the first portion of the film, focusing more on domestic issues, doesn’t completely hint at the grimness that will take over during the second half. But it’s nevertheless a constant in the story, hiding in the margins before making its presence known as strikingly as a mushroom cloud in the sky.