Bree Stallings' latest visual conversation started with a poem she wrote about her family. 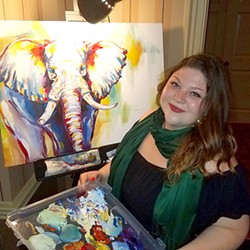 Stallings, 26, describes herself as a visual literacy artist who focuses on teaching the healing power of artistic expression while exploring conversations that are often hushed quickly when someone chooses to speak out about them. One such conversation Stallings explores in her new exhibit, "Things With Wings," is woman-on-woman violence created by patriarchal systems.

On Saturday, August 12, the Charlotte-based multi-media artist, illustrator, muralist, writer and activist will unveil her new paintings, which are packed with symbolism and visual idioms that allude to those hushed topics, at Haylo Healing Art Lounge in Plaza Midwood.

According to Haylo owner Hayley Moran, Stallings' work fits in with the tattoo shop and art lounge's mission, which Moran says is "to use our voices in a variety of ways."

Making art has been a multi-generational process for Stallings. Her grandfather, Jack Sexton, is a potter who has shown and sold his work across North Carolina, and even internationally, through JS Pottery in Gaston County. Her mother, Robin Sexton Stallings, is a graphic artist who studied at Central Piedmont Community College.

Stallings and her mother both work in studios at C3Lab in South End, and C3's Maria Nocik knows the two well. "Creativity runs in their family," Nocik says. "It's lovely to see the love, support and energy they show each other in their studios." The two will be showing their work together as part of a C3 studio artists group show in October.

Stallings grew up "submerged" in art since the moment her mom taught her how to paint and draw, but she went even deeper when she pursued a degree in studio art and creative writing at Queens University. After graduating in 2013, Stallings made her way into community work, using art as her medium.

Today, she teaches at Community School of the Arts and Behailu Academy, where she uses art to help in the healing process of domestic violence survivors, refugee children, drug addicts and people on the autism spectrum.

Art used as a healing agent is the focus of her "Things with Wings" exhibit at Haylo. Stallings says the message in the poem that inspired the collection could not be fully expressed through the literary arts, so she took it to the easel to bring the conversation to life.

"I have done work like this before — like write something and then paint it, or the other way around," she says. "I do this to try to convey the same message in a couple different mediums, because I think it carries almost a like a second language that may pick up something else."

The paintings that resulted from the poem became a visual tale of women navigating patriarchy — sometimes gracefully, sometimes violently. "We live in a time where just being in a man's world makes it really difficult, because we have these standards that are impressed upon us," Stallings says. "I think women have a couple of reactions to these forced standards: We adopt society's standards, or we are mean to ourselves and other women. We don't know how to navigate between [the two], and it is not really acceptable to talk about it." 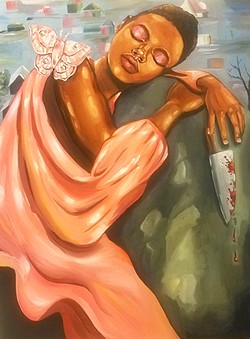 One of Stallings' favorite pieces in the exhibit is a painting entitled "If Only for a Moment I Choose to Feel the Beauty and Not the Violence." It pictures a woman resting on a rock, releasing her grip on a bloody knife as a moth lands on her shoulder. In the background is a flooded town.

Stallings says the piece speaks to the idea of making choices. "We can make the choice just not to engage," she says. "We don't know how to end the violent speak, but we do know how to take a second to just not feel."

She uses imagery of insects and winged animals throughout the exhibit. "I have always painted and drawn moths and birds," Stallings says. "With the moth, there is this idea that we return to light and are drawn to that light."

While the throughline of "Things With Wings" may be imagery of winged creatures, Stallings also pushes the winged concept beyond that in some of the pieces. "For a while I was trying to get metaphorical and think of other things with wings — like hospital wings, wings of a mansion, wings of a plane, and concepts like that."

Stallings has long used her art as a tool in her community activism. She recently partnered with the Mecklenburg County Health Department and students at Behailu to do three large-scale public murals in designated "food deserts" around Charlotte to put a spotlight on the problem of food insecurity. She's also used her work to raise awareness on issues ranging from economic mobility to homelessness to environmental concerns.

"There are many artists that depict social, political or economic disparities in their artwork," C3's Nocik says, "but Bree's one of the few that takes that call to action to heart and continually works with under-served communities and kids on a daily basis, which makes her a great role model."

The overarching idea in "Things With Wings," Stallings says, is for viewers to come away from the exhibit with the realization that we all are "things with wings."

"I think people relate to animals. I also think they understand the idioms and symbolism that come along with the animal," Stallings says. "That helps to translate the metaphor a little better." 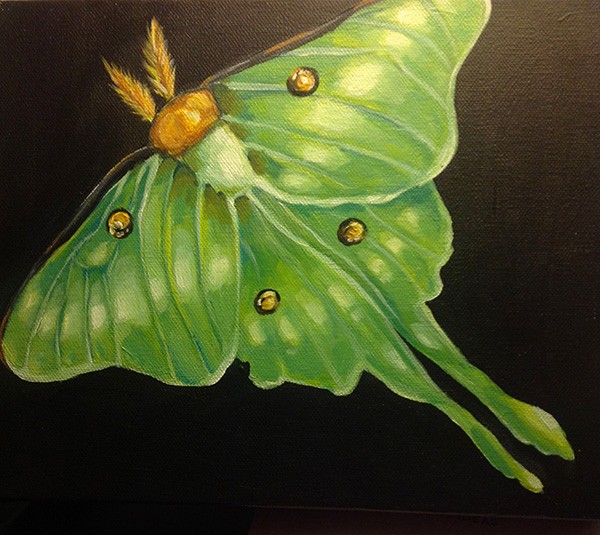 The winged imagery in Stallings' paintings is not the only symbolism helping to translate her ideas about stepping back and thinking before acting. The location she's chosen to exhibit the work also plays a role in communicating those ideas. Haylo Healing Arts Lounge is a tattoo studio that takes the tattoo experience beyond decorative body art. Workshops in mindfulness, yoga classes, breast cancer fundraisers and areola tattoos for women who have had mastectomies are among the services Haylo provides to the Charlotte community.

"I appreciate and want to show Bree's art because she uses her art for a purpose," Moran says. "She creates with a cause."

Stallings appreciates that Haylo gets what her art is about. "It is warm and there is beautiful art [inside]," she says. "I thought that matched what I was going for, which is this intimate one-on-one experience."

Stallings has been moving in this space for years, but "Things With Wings" offers everyone their chance to "submerge" into the unspoken, art-driven, healing environment of her world.