In the grand scheme of things with Lore Emelio 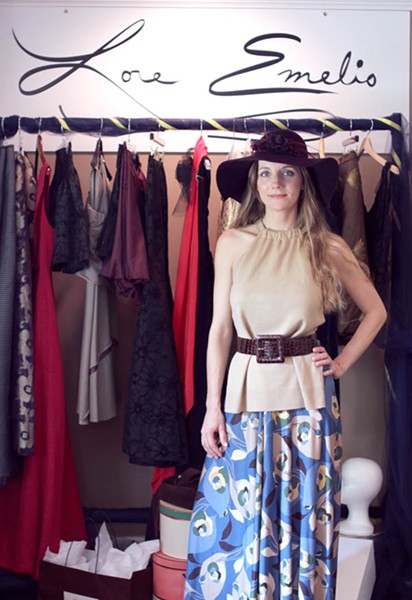 Local fashion designer Lore Emelio says the only thing missing from her upcoming fall 2011 showcase is a baby grand piano. From the way she describes what to expect of the event, dubbed All Things Grand, we're inclined to believe her.

On Oct. 1, Emelio and her team will take over Silver Hammer Studios to present a runway show of her latest designs. The Parsons School of Design/UNC-Chapel Hill graduate is best known for her hat collection, which exudes feminine Southern charm, perfect for the Queen's Cup Steeplechase.

"I keep trying to just have a hat show, but you have to have apparel for the models to wear," Emelio says. "So I end up making the dresses, and it ends up being a show. I can't help it."

In addition to hats, the designer also plans to feature her signature men's ties and bowties, a "drop-dress," "voluminous overskirts," and a "very sleek" ankle pant.

"We're doing a lot of tulle this season," she says. "A lot of embroidered fabric, a lot of feathers, a lot of beading. It's high glamour, full fashion. It's the big finale. I think it's been a natural progression."

She also teases us with mention of a few new pieces, but declines to give any specifics. "They're breathtaking. They're very classic fashion, with a long history and heritage of them. I think the South in general values history; we honor our heritage. And this is my way of demonstrating that with my voice, which is fashion."

Beyond the looks that will take over the runway, other touches throughout the Silver Hammer space promise to make this an impressive shindig. Expect a scene of live, frozen models, a Grand Hall Guard, complete with giant flags and a full choreographed routine, and even live art installations in the bathrooms, plus much more.

On a philanthropic note, the designs presented throughout the night will be auctioned off by private bid, and 10 percent of proceeds will benefit the volunteer organization Physicians for Peace

Emelio says she started planning All Things Grand two years ago, even before her first show. "It's everything I have to give. It's going to be quite the spectacle. I don't care if people showed up in their pajamas. If it's a tuxedo or if it's pajamas, I want people to wear their best. Because that's what I'm sharing: my very best."