I Was Jane Fonda's Bodyguard

Or, how I learned to stop worrying and love life during wartime 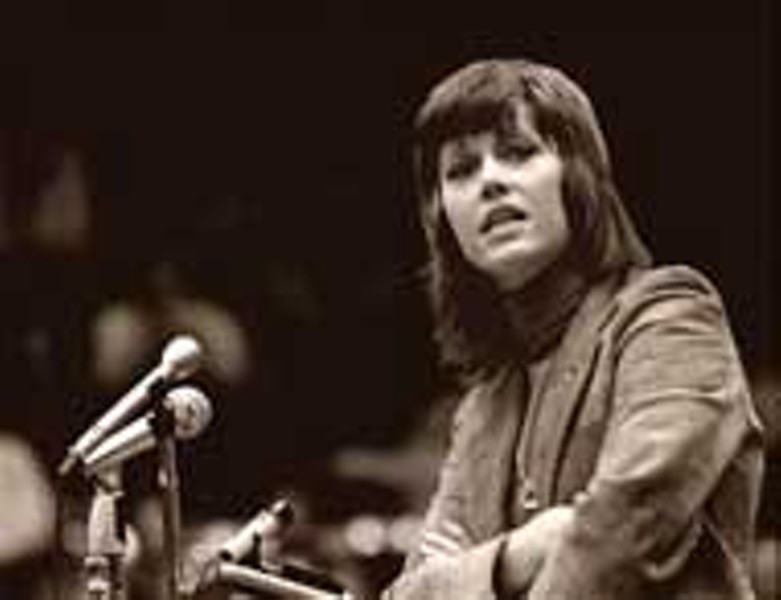 John Cessna Jane Fonda, circa 1970
Lately I've been thinking about Jane Fonda, and not just because of her new autobiography, My Life So Far, though God knows that would've been enough to plant her in my brain. The hype for the book has been relentless - and more than matched by the pseudo-patriot sour-asses who've filled airtime and cyberspace with their tired "Hanoi Jane" rants. No, all that's just part of what's made me reflect about her. A month after her book was published - May 4 - marked the 35th anniversary of the Kent State massacre, and for me, that tragedy and Fonda are forever connected. It was soon after Kent State that I met her, if ever so briefly, in full anti-war mode. It's amazing how little was made of the anniversary of Kent State and its aftermath other than the usual repeated showings of the photo of the woman on her knees crying, but then we Americans aren't known for giving a rip about our own past. Regardless of our historical amnesia, it's a cold, simple fact that May 1970 was a turbulent, chaotic time that scared the hell out of the established order. I'm guessing that's one reason the media, currently busy genuflecting to Washington authority, gave Kent State only a quick nod before getting back to idiot fodder like the runaway bride.

The year 1968 had been rough, but for sheer, keening rage, May 1970 was unlike anything since the Civil War. Within two weeks of Nixon's invasion of Cambodia, and 10 days after National Guardsmen killed four students at Kent State, nearly 500 colleges were brought to a halt by student strikes, and serious violence rocked hundreds of American campuses. For a couple of weeks, throwing bricks at cops, busting windows, fire-bombing ROTC buildings, rolling police cars, and heavily armed authorities launching tear gas and breaking heads were primary preoccupations at this country's centers of higher learning. A feeling that we were in the middle of a national emergency was in the very air we breathed.

In the middle of all that, Jane Fonda was on a national anti-war speaking tour.

At the time, I was attending the University of South Carolina in Columbia where the administration building had been taken over and trashed by students, followed by riots, state police, National Guard, tear gas and, on the second night of unrest, police and state troopers who followed protesters into dorms and beat the hell out of anything that moved. The heavy-handed police tactics infuriated even students who supported the war.

The next day we learned that Fonda was coming to town for a rally. The university, afraid she would incite students to burn down the school or something, denied her permission to speak on campus, so organizers quickly arranged for her to speak the next evening at the city-owned Maxcy Gregg Park. Around 4,000 people crammed into the relatively small park, even though the rally would begin a mere two hours before a state-imposed curfew.

A couple of friends and I went early, determined to get close to the stage to see Jane Fonda up close. We had gathered with about 20 other students near the rear of the stage when one of the rally's organizers rushed up and quietly revealed that the university had told him someone claiming to be from the Klan had phoned the school and said they planned to kill Fonda if she spoke at the rally. "We need five or six bodyguards to walk Miss Fonda from over there" — he pointed at a station wagon parked in a shady area across the street — "to the stage and back again after the rally."

I didn't hesitate. I raised my hand and moved, along with a few others, toward the guy. In those days the Klan made a habit of phoning in threats and then backing down, so I figured there wasn't anything to worry about — plus, hell, who cares, I'd get to meet Jane Fonda!

A couple of minutes later, four or five of us walked with the organizer across the street while he explained that we should be sure Fonda was surrounded as we escorted her. She was in the passenger seat of the station wagon, wearing jeans, a collarless shirt, and her Klute haircut. With the station wagon surrounded, she got out, glanced around, and started walking toward the rally. By then, she was being constantly tailed by an FBI agent; she pointed him out — he was standing about 30 feet away — then smiled and called out to him: "Bill, I'm just going across the street for a speech, I'll be right back." We chuckled and walked her to the stage. I was surprised that she was almost as tall as I was.

We walked without saying anything and as we got nearer, Fonda's energy level ratcheted up and she bounded onto the stage, holding up her fist in the anti-war salute of the time. The roar was like that of a crowd at a rock concert. She gave a strong, unwavering speech, denouncing Nixon and the war in Vietnam in no uncertain terms, and had everyone in the palm of her hand. She urged everyone to get involved in the political process and "leave violence to those who are violent, and we know who they are," as she gestured toward a group of police cars down the street.

It was over in about 30 minutes. She saluted the crowd, turned and came down the steps. Our little group gathered around her again — she was sweaty and seemed energized — and made our way back to her vehicle. She chitchatted a few minutes, although I was frankly too gaga to say much. Then she turned and looked at our star-struck little gang and said, "Thanks, guys." She got into the wagon with the organizer, and he drove off, away from the rally. Bill the FBI agent was already in his car. He pulled out and followed her down the street.