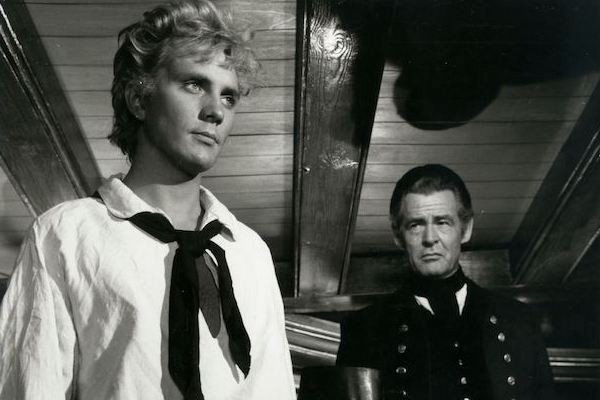 BILLY BUDD (1962). Fans of nautical adventures will find much to appreciate in Billy Budd — even if (especially since?) it appeared on the scene long before Johnny Depp and his now-stale shtick. Adapted from the Herman Melville novel Billy Budd, Sailor (published decades after the author’s death) and set at the end of the 18th century, this stars Terence Stamp as the title character, an honest and naïve sailor whose genuine decency affects everyone around him in a positive manner. Make that almost everyone — the exception is John Claggart (Robert Ryan), the ship’s sadistic master of arms and a bully who feels threatened by Billy’s seemingly indomitable goodness. Caught in the middle is Edwin Fairfax Vere (Peter Ustinov), the vessel's captain and a fundamentally moral man whose dedication to the law leads to disastrous results. Ustinov was a popular actor for 60 years (Oscars for Spartacus and Topkapi) and an acclaimed scripter for 50, yet he also helmed a smattering of films over a 40-year stretch — this one is arguably the best of that directorial batch, with forceful performances (look for a young David McCallum, one year before The Great Escape and two years before The Man from U.N.C.L.E.) and a script (credited to Ustinov and Cat People screenwriter DeWitt Bodeen) that thoughtfully examines the dangers of placing the letter of the law over true justice (a relevant theme in this age of the impeachable Trump and his rampant corruptibility). Ryan is, as always, superb, while Stamp earned a Best Supporting Actor Oscar nomination for his beatific turn.

Blu-ray extras consist of audio commentary by Stamp and Steven Soderbergh (who handed the actor the leading role in his 1999 drama The Limey) and the theatrical trailer.

I FEEL PRETTY (2018). Important issues receive an often problematic presentation in I Feel Pretty, an exercise in empowerment that ultimately proves to be less than the sum of its parts. Or should that be body parts, given the laser-like focus on outward appearances? Amy Schumer plays Renee Bennett, a woman who’s miserable because she doesn’t look like all the wafer-thin beauties who work out alongside her at SoulCycle classes or who appear in ads for the makeup conglomerate Lily LeClaire (cue a great comedic turn by Michelle Williams as a superstar model). But after catching the Tom Hanks comedy Big on TV, Renee wishes to become beautiful. Her wish is granted – sort of. Falling off a stationary bike, she bumps her head and wakes up believing she has been physically transformed into a RoboBabe. Of course, she looks exactly the same, but her belief in her physical makeover results in a newfound confidence. Schumer delivers a strong performance, but part of the film’s problem rests in the unfortunate character turn devised by writer-directors Abby Kohn and Marc Silverstein. Renee doesn’t remain a decent human being; instead, her delusion leads her to start treating those she deems not beautiful, like older people and even her longtime best friends (Aidy Bryant and Busy Phillips), with a certain measure of contempt and dismissal. It’s a perplexing plot point that renders her far less sympathetic, and if the film’s notion is that people should be judged by their inner beauty, then what are we to think when the lead character displays an ugliness at her core? (Similarly, the script’s attitudes toward some of the supporting characters are insulting and ill-advised.) Of course, Renee learns her lesson by the end, but the film’s muddled messages do little to similarly educate viewers.

Blu-ray extras include deleted scenes and a gag reel.

ISLE OF DOGS (2018). Despite a rating that allows for viewing by children, despite the animated nature of the piece, and despite the focus on our cuddly canine companions, Wes Anderson’s Isle of Dogs is decidedly not one for the kiddies. In a pinch, parents are probably better off exposing their youngsters to Fifty Shades Freed – at least in that film, there are no shots of a dog’s skeletal remains, the result of nobody being able to get the poor mutt’s locked cage door open. On the other hand, adults are encouraged to check out Isle of Dogs at their earliest convenience. Anderson’s first film since his grandly entertaining gem The Grand Budapest Hotel is a dazzling and heady achievement, employing quirky animation to relate its tale of a futuristic Japan in which all dogs have been confiscated to nearby Trash Island after a canine-related virus has swept through the country. The fascistic ruling class ultimately seeks to kill, not just quarantine, all dogs, with only a pro-dog professor (Akira Ito), his dedicated assistant (Yoko Ono!) and his courageous students seeking to thwart this insidious agenda. For his part, a little boy named Atari (voiced by Koyu Rankin) misses his dog Spots and sets out to Trash Island on a rescue mission. Upon arrival, he encounters resistance from a gruff stray named Chief (Bryan Cranston) but receives assistance from a quartet of former pets (Edward Norton, Bill Murray, Jeff Goldblum and Bob Balaban). The stop-motion animation is even more impressive than that displayed in Anderson’s previous romp in this realm, 2009’s Fantastic Mr. Fox, and the multi-faceted plot continually branches out in imaginative and unexpected ways. Canines will object to the phrase, but Isle of Dogs is clearly the cat’s meow.

Blu-ray extras consist of behind-the-scenes featurettes on the cast, the animation, and more; a photo gallery; and the theatrical trailer.

RAMPAGE (2018). The heart of Rampage rests in the relationship between Davis Okoye (Dwayne Johnson), a San Diego primatologist, and George, an albino silverback gorilla. Through some pilfering from Mighty Joe Young, the early sequences establish a nice rapport between Davis and George (Jason Liles is the actor under the motion-capture CGI), and watching these two pal around in the manner of Clint and Clyde in Every Which Way But Loose wouldn’t be the worse way to spend two hours. Unfortunately for George, he’s exposed to a serum initially developed by Dr. Kate Caldwell (Naomie Harris) to aid humankind but nabbed by ruthless CEO Claire Wyden (Malin Ackerman) to sell as a biological weapon. The serum, which not only super-sizes its recipients but also triggers rage, ends up also infecting a wolf and an alligator. The three behemoths head to Chicago, with only Davis, Kate and a gregarious government agent (Jeffrey Dean Morgan, pouring a thick Southern accent onto his characterization as if it were syrup on pancakes) there to stop them from completely leveling the city. As far as video-game adaptations go, Rampage is one of the better ones, although that of course isn’t really saying anything. An amusing gag or quip manages to occasionally stick the landing, but the plot particulars are rarely more developed than those found in, well, an arcade game. George is a magnificent visual effect, but the other monsters are risible, and watching them demolish buildings (and each other) during the climax makes for a particularly protracted slog. Rampage aspires to be dumb fun, and that’s fine – we can always use films of that nature. It’s just a shame the fun too often takes a backseat to the dumb.

Blu-ray extras include a look at the film’s genesis; deleted scenes; a piece on the visual effects; and a gag reel.

SEX, LIES AND VIDEOTAPE (1989). It’s impossible to overstate the importance of sex, lies, and videotape when it burst onto the scene in 1989. Capturing the Palme d’Or at the Cannes Film Festival (as well as an acting prize for James Spader), the film went on to not only help spearhead the American independent movement but also served as the opening salvo for Miramax as it began its two-decade reign as the premier art-house studio. It also functioned as a colorful calling card for debuting writer-director Steven Soderbergh, earning the filmmaker a Best Original Screenplay Oscar nomination with his first at-bat (and a full 11 years before he would nab the Best Director award for Traffic). Spader stars as Graham, who newly arrives in Baton Rouge to visit his old school chum John (Peter Gallagher), a slick businessman who’s cheating on his wife Ann (Andie MacDowell) with Ann’s younger sister Cynthia (Laura San Giacomo). The impotent Graham and the frigid Ann strike up a friendship, one that’s ultimately affected by Graham’s revelation that he likes to videotape women discussing their most intimate sexual secrets. The gift of gab is highlighted in an unusual motion picture that never feels smug, smutty or smarmy but is instead bright, quick-witted and bracingly alive. All four central actors are excellent, although it’s MacDowell who delivers the most revelatory turn — even with Four Weddings and a Funeral on her resume, she would never again land (and fulfill) a role as rich as the one she essays here.

Blu-ray extras include audio commentary (from 1998) by Soderbergh; a retrospective making-of featurette; a deleted scene; a trio of vintage interviews with Soderbergh; and a 1989 interview with Spader.

YOU WERE NEVER REALLY HERE (2018). Like Terrence Malick before he opted to go on a tear in this current decade, Lynne Ramsay is a highly skilled filmmaker who doesn’t make nearly enough movies. Her fourth feature in a 19-year span is You Were Never Really Here — unfortunately, given the scarcity of her projects as well as the high quality of her past pictures (1999’s Ratcatcher, 2002’s Morvern Callar and especially 2011’s We Need to Talk About Kevin), this latest effort comes up short. Basically, this adaptation of Jonathan Ames’ novel plays like an entry in The Equalizer series, only with slightly less catharsis and slightly more artfulness. A shaggy Joaquin Phoenix stars as Joe, a mentally battered individual (abusive childhood, PTSD, the works) who rents out his services to locate missing children and (more often than not) take a hammer to the skulls of the perverts who snatched them. His latest assignment involves tracking down the young daughter (Ekaterina Samsonov) of a New York senator (Alex Manette). With its storyline of a disturbed vigilante operating on the far outskirts of the political scene, this brings to mind not only Martin Scorsese’s Taxi Driver but also the '80s cult discovery Cutter’s Way (reviewed here). Yet whereas those films offered fascinating character studies that cut to the bone, this one largely keeps its protagonist at bay, and Phoenix’s committed performance often gets muted in a hermetically sealed endeavor that attempts to get by on mood rather than meaning. A few individual moments crackle, but it’s ultimately disappointing to see an artist as unique as Ramsay wrestling with something so familiar, as her attempts to add a welcome feminist spin to a largely masculine template gain little traction.

There are no Blu-ray extras except for trailers of other films.

(A look at a film that's currently available on streaming services) 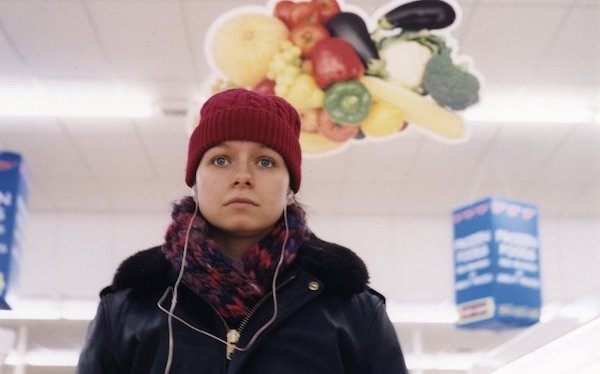 MORVERN CALLAR (2002). For an earlier — and better — movie from You Were Never Really Here writer-director Lynne Ramsay, check out this indie effort from Ramsay’s native Scotland. Samantha Morton, a two-time Academy Award nominee for In America and Sweet and Lowdown but perhaps best known for her excellent turn as the Pre-Cog Agatha in Minority Report, essays the title role in this study of a young dreamer whose life takes some unexpected twists after her boyfriend commits suicide. Ramsay (working from Alan Warner's novel) and Morton trust the audience enough to resist softening up or even explaining their central character, resulting in a difficult yet ultimately rewarding piece. (Amazon Prime)