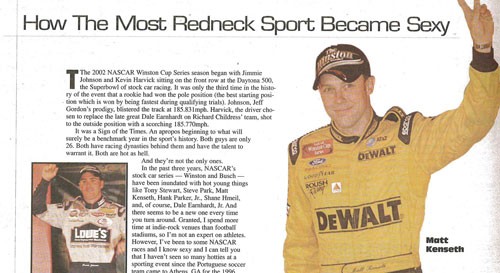 If there's one thing the staff of Creative Loafing's always had, it's the capacity to spot hotness. Whether we're talking guys or trends, doesn't matter. In this story, CL looks at both: the sexy guys who make up NASCAR and the surge of women (a 70-percent increase that year alone) and young people watching the sport. Here's one exchange the writer notes during a race she attended, between a couple arguing over a pair of binoculars:

She said, "But I'm looking for Junior."

She glared and set her jaw. "But I'm looking for Junior!"

He stomped off to get a beer to wash down his feelings of inadequacy. She soon located her prey, gasped, and then sighed. Audibly sighed.

It goes without saying that stock car racing is a big deal in Charlotte. But Herrin's goal with this piece wasn't simply to point out that hotties had suddenly taken over racing and ogle them (although there's plenty of that: Hello, Jimmie Johnson!). Rather, she takes the misguided perceptions often associated with the sport — some that linger even today — and knocks them on their head. While CL may not always celebrate everything NASCAR, we like to get in where we can when it comes to busting old stereotypes. And, of course, explaining to our readers why Matt Kenseth is sexy.