Is now the time to get renewable?

If a recent poll from Conservatives for Clean Energy is an accurate indicator, you're probably in favor of more renewable energy production in North Carolina. But is it time for your very own solar array?

Under normal circumstances, knowing when to enter any market is an imperfect guesstimate. That uncertainty spikes when coping with an erratic president's unpredictable whims and news that the nation's largest energy producer — Charlotte's Duke Energy — has thrown $62 million in rebates into the mix.

As a reporter who's covered the energy beat for more than a decade, I'll tell you what I did: When Duke Energy announced its rebate offer in January, I jumped. Panels will be installed on my house next month, and while nothing is certain, our rebate could be as much as $5,400. Considering that solar prices dropped 52 percent in North Carolina between 2012 and 2017, according to the Solar Energy Industry Association (SEIA), and that the current federal tax credit is 30 percent (declining to 10 percent by 2022) – solar energy has finally become affordable for my middle-class family.

And we're not the only ones. Jeff Aliotta of RENU Energy Solutions, a Charlotte-based solar company, says, "In a few years, the people of Charlotte are going to have built a new power plant in the city on their rooftops." This dispersed energy, he says, matches consumption, so there is less energy wasted.

For example, at my house, we're buying just enough solar panels to cover our usual energy consumption. We'll receive a new Duke Energy meter that runs both ways, so if our panels produce more electricity than we use the excess goes onto the company-managed grid, and if we need a power boost we'll accept energy from the grid.

According to InsideEnergy.org, with the old model, where energy is produced at power plants and transported across wires sometimes over hundreds of miles, "about 65 percent, or 22 quadrillion Btus [the international measurement unit for energy] was wasted in the U.S. in 2013." 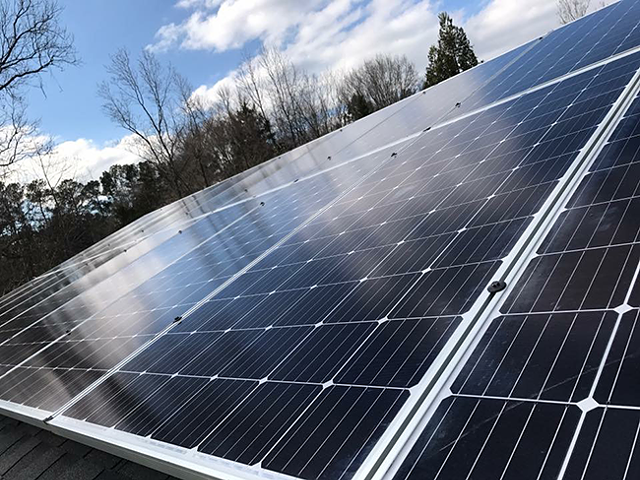 Duke Energy's rebate, which maxes out at $6,000 for residential projects, is the first of three programs the company has proposed in response to the General Assembly's 2017's Competitive Energy Solutions for North Carolina law.

"The Competitive Energy Solutions law for North Carolina will reduce the cost our customers pay for solar, while also supporting their interest in solar energy in ways that are most meaningful for them," said David Fountain, Duke Energy's North Carolina president. "For many customers, installing solar is a significant investment. Duke Energy's rebate program will help them by lowering their initial costs."

"It's definitely created a lot of interest and we've seen a spike in our first quarter installations, as compared to other years, for those wanting to take advantage of the rebate," says Jeff Redwine of Renewable Energy Design Group, a local solar company that works throughout the Carolinas.

"[The rebate] really excited us because the rational customer can recognize that solar is valuable but sometimes need that nudge," says Hannah Wiegard, a spokesperson for RENU Energy Solutions. She cautions, however, "... tax credits and rebates will eventually go away."

My family took out a no-payment-down $14,000 loan to finance 16 solar panels for our two-story, 2,400-square-foot northwest Charlotte home. That is a large number, but, if all goes well, our power bill goes away and the loan payments will be approximately $35 less than our current energy bill. Plus, we will own the panels outright by the time my husband retires. So, for us, this decision is as much about financial planning as it is about getting closer to the ideal of energy independence. But, I still wonder if we made the right decision.

In January, Donald Trump announced two tariffs – one on solar panels and another on steel and aluminum from a few of our closest allies: Canada, the European Union and Mexico. Then he acted like a petulant toddler at the G7 meeting held this month in Québec, Canada, one day saying that the group of seven allied countries should drop all tariffs and the next suggesting that all trade between the countries should be suspended.

Initially, Trump proposed a whopping 30 percent tariff on imported solar panels with the four-year tariff decreasing by 5 percent per year. Reuters reported on June 7: "President Donald Trump's tariff on imported solar panels has led U.S. renewable energy companies to cancel or freeze investments of more than $2.5 billion in large installation projects, along with thousands of jobs, the developers told Reuters."

This is particularly concerning for North Carolina, which has held the No. 2 rank in solar installation – behind California – for a couple of years now. As of 2017, of the estimated 250,000 solar energy employees in the U.S., 7,621 were in North Carolina according to SEIA, and they were employed at one of the state's 228 solar companies, of which 41 are manufacturers and 106 are installers or developers.

Today, according to the U.S. Energy Information Administration, the solar industry employs roughly three times more people than the coal industry. About 40 percent of those employed in solar do some form of installation work and 20 percent are in manufacturing.

"We're finding the tariffs to be more of a bump in the road than a show stopper," says Randy Wheeless, a spokesperson for Duke Energy. "Large scale companies might be more affected than rooftop solar companies," he says, adding that his company's solar projects in North Carolina and Florida are moving forward.

Morgan Lyons, a spokesperson for SEIA, agreed, though he also says that Trump's tariff "is going to do significant damage to our industry; we're expecting some 10,000 to 20,000 jobs lost because of decreased demand with these artificially increased prices on modules."

As for Wiegard, she says she doesn't want to downplay the effect the tariffs will have on her industry, but points out that the panels themselves are just a small part of the cost. Labor, permitting, construction and other overhead costs factor into the final price of a solar installation, she says.

"The tariffs are definitely triggers for moving sooner than later," says Redwine, whose company, like Wiegard's, sources solar panels from more than one company, including several U.S. manufacturers.

North Carolina solar companies have overcome government-made hurdles before, like when the General Assembly allowed North Carolina's solar tax credit to expire at the end of 2015. "That was definitely an incentive that brought a lot of investors in and helped to get the large solar farms started," Redwine says.

Government actions like Trump's tariffs "can have a dramatic impact on solar," says Brian Bednar, president of Charlotte-based Birdsong Renewable Energy. His company develops utility-scale solar projects, "often three years in advance," he says, so much of his work is "based on assumptions." And when Trump decided to artificially inflate the cost of materials – like steel and aluminum – needed to manufacture solar panels, and then the cost of imported panels, "It made some projects we were working on unattractive," Bednar says. "The number one reason for that is uncertainty."

This comes at a time when the state government has mandated that solar companies "get competitive," Bednar says. He anticipates Trump's tariffs could raise solar construction prices as much as 12-13 percent, though that will vary by project. "When you're competing against fossil fuel generation for every tenth of a cent, a cost difference like that can have a huge impact," he says.

Since BRE opened for business in 2009, Bednar estimates the company has developed 430 megawatts in solar power generation. "That's about half of what a typical coal plant generates," he says.

Duke Energy's rebate application won't be available online until early July, and since solar installations from January 1, 2018 and on qualify, the company is set to receive a flood of requests – including mine.

"We think this will cover 100 megawatts, total, of rooftop solar which will triple the amount of rooftop solar in North Carolina," Wheeless says. When asked how long he expects Duke's $62 million to last, Wheeless explained that it's difficult to say since the application process hasn't begun. He also reminded me that the rebate program is staggered over four years, and includes residential and business projects.

Now the cautionary tale: When our salesman from Power Home Solar, based in Mooresville, sat on my porch and made his pitch he made it seem like the Duke Energy rebate is a given. His faux certainty was followed by an email from the company indicating that the rebate had been approved. Since the application process hasn't begun, that is not possible. So be wary of overzealous sales folks, y'all.

Also, about that federal tax credit, the terms of our loan – and I assume that of others – includes the understanding that when you receive the credit you'll turn it directly over to your loan company. If you don't, those low monthly bills you're expecting will jump, too.