"Why kill people who kill people to teach people that killing people is wrong?" demanded Willie's 16-year-old great-niece, Nikki Kendrick, a fiery teenager wearing a brightly colored scarf to hold back her shiny black hair. Nikki lives in Charlotte with her grandmother, Katie Glover, and her aunt Regina. Nikki stewed in her adolescent anger (she had not been allowed to visit Willie because she was on the wrong visitation list); Willie's middle-aged sisters were more concerned with mourning.

Glover's mind was fixed on the victim's family, whom her mother had known.

"We have ... tried not to do or say anything that would upset her family," Glover said. "And I hope they get some peace from all this, if they truly believe that he's guilty, but I don't see how you can get peace from anybody's death."

After the execution, Vallerie Roberson's husband, William Dixon, had released a statement thanking the state for keeping others safe from Willie Brown and for giving his family closure. He also expressed sorrow for the Brown family.

"It just makes you tired; I don't know what it is," said Glover, who'd been awake for almost 24 hours. "You don't want to go to sleep, but you know you need to lay down."

She tried in vain to send her granddaughter to bed, but Nikki was still fuming over the events at the prison, where she was barred from the visiting room and where a pair of her cousins had taken charge.

"I didn't like the fact that the twins was trying to run everything," she said.

"Don't worry about that," said her great-aunt, Teresa. "We're going to put that behind us because we're going to try to become a family now. We're not going to argue with each other and do stuff like that because, see, that's not what Junior wants us to be; he told me that. He didn't want us to have nothing between us like that, so we're going to forgive whatever, whoever did whatever to you or whatever to me. We're gonna forgive 'em for it, and we're going on, OK? That's what we've got to do, and try to be a family and love each other."

"That's the only way you can live with yourself is to forgive 'em," said Glover. 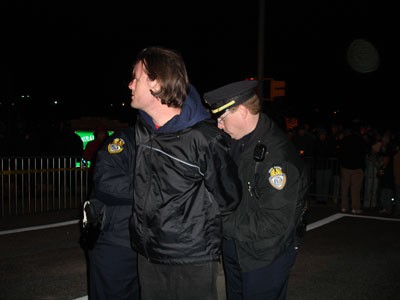 Her daughter Regina changed the subject. She talked about the high bail set for the death-penalty protesters and the TV cameras that spied them at the prison. Willie's brother Tony and their nephew Angelo discussed whether they should wear neckties to the April 23 funeral. Willie Brown would be buried next to his mother Essie May in the family cemetery in Williamston. His sisters discussed how they should dress Willie, whether he needed a shave, and whether he would need shoes, or would the casket cover his feet? They remembered Brown's neatly pressed coveralls, which the prison refused to let the family keep. They recalled the deep breaths Willie took as the poison entered his veins.

Tony stewed over how the state could wait 23 years to take his brother's life, but said he understood the victim's family's need for revenge. "If somebody hurts my family or something, I'm there in the moment, I'm not saying it's justified, but I could do that probably," he said. "But all these years and waiting? You can't ..." he stammered. "You can't ... What kind of mind you got to do that? Cause to wait, that's another killing there."

Nikki was still not quite ready to surrender her grudge against her older cousins for taking charge of the family gathering at the prison.

"I didn't like what they done tonight [executing Willie], but there wasn't nothing I could do about it," said Tony.

"No, nothing in the world we could do," Teresa said softly to herself.