In fact, the state of North Carolina has more anti-death penalty activism than any other state in the nation. Nowhere else are civil disobedience actions against the death penalty happening at every execution. Some 1,100 businesses, community organizations and municipalities have endorsed a moratorium on executions until the state can administer them more fairly. Across the nation, just 4,300 such groups have signed moratorium resolutions, meaning that organizations and local governments in North Carolina are responsible for more than 25 percent of the total.

Six years ago, the city of Charlotte became one of the first to endorse the resolution. Moratorium coalitions meet regularly in Mecklenburg and Gaston counties, and Charlotte is one of several cities and towns across the state to host prayer vigils before every execution.

Nazareth House has taken the activism beyond politics and prayer to serve the people most affected by the death penalty.

"There aren't too many that open their doors up like that," said Kendale. "I mean, I really mean that."

"Well," said Bass, haltingly. "Shoot, I wish there was a whole lot more we could do, but -- under the circumstances -- it seems like this is something."

"It really is. We're saving a whole lot of hundred dollars tonight," said Kendale, sending a wave of nervous laughter around the table. "That's what it was to rent a room at a hotel."

"Well good," said Bass. "We sure don't want that whole process to stimulate the economy. Spend that money in Williamston and Bertie."

"So you're married?" he asked.

After Glover and the rest of the family had left for the prison earlier that evening, Bass' wife, Roberta Mothershead, had fretted over whether to return home after the vigil to comfort the family or risk arrest protesting the execution. She'd written a letter to read to police officers guarding the prison: "We were not present at the scene of Willie's original crime against Vallerie, God rest her soul, and may her family forgive us for failing to protect her! But we ARE present here tonight, my brothers and sisters. We can, tonight, say we will uphold our oaths to serve and protect life."

Mothershead decided to commit herself to civil disobedience because her housemates, Scott Langley and Sheila Stumph, had been in court that afternoon facing the trespassing charges from the two previous protests. The Wake County District Attorney's Office had dropped charges from the group's first demonstration in December but was now threatening jail time for protests in January and March. Mothershead had decided to represent Nazareth House in the current act of civil disobedience in case Stumph and Langley had been put in jail or on probation. But to the activists' surprise, the prosecutors hadn't been ready to try them on the previous charges, and the hearing was postponed until June. So Langley and Stumph, along with a handful of others, decided to mount yet another act of civil disobedience. Even though Mothershead was not absolutely needed, she opted to join them anyway, kneeling in prayer before at least 30 police officers guarding the prison parking lot and trusting that her husband would take care of their teenage son, Grant, and the Brown family. 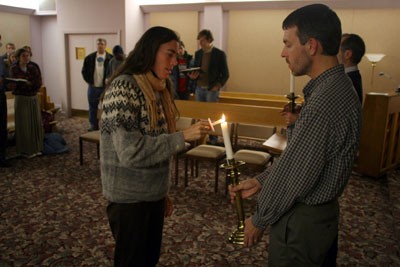 "This was her first time," Bass told Kendale and the others.

"So she's probably in the Wake County Jail right now," said Bass. "It's just a way of saying, 'Look, you know, I mean, it's important to stand there and pray ... but at some point, some folks have said, 'You know, this isn't enough. We've got to do something more.'"

"I was thinking a lot about my family, brothers and sisters, and nephews and nieces," he told Dillia.

"Well, this just seems so unreal," she said of the execution. "It really does. It still don't seem real."

"You're right," said Kendale. "Like something off the television. The whole world is on us tonight. You know what I mean? I mean, it seems like that."

"I wouldn't wish this on nobody, you know what I'm saying? It's a sad situation," said Kendale. "They're not just punishing him, they're punishing his whole entire family, you know?"

Just before one in the morning, Kendale, Kenny and their partners went to sleep in a couple of the bedrooms upstairs in the Nazareth House. Two hours later, after Willie Brown's brother Tony and sister Teresa witnessed his execution, they and a half dozen other family members found a leftover platter of sliced meats and cheeses in the Nazareth House refrigerator and crowded around the dining room table once again.