Racism was on Durham activist Beth Brockman's mind as she fueled up for the night's act of civil disobedience, her fourth in the past five months. Brockman, also at the dinner table at Nazarath House, eased into the subject.

"That East Coast along North Carolina has a reputation of being pretty conservative," Brockman said casually to Glover. "Was it that way when you were growing up?"

"Well, things were a lot different, because it was during the time of segregation when I was growing up, when I left home. I think that's why I could never go back and live," said Glover, matter-of-factly. "I love going back to visit, but I don't think I could ever go back and live there. It's a lot of bad memories and stuff."

Glover launched into a story about her neighbor Joe James Cross. Rumors were going around Martin County that Cross had been sleeping with a married white woman, Glover said. A group of local whites surrounded Cross on Route 17. They castrated and murdered him. 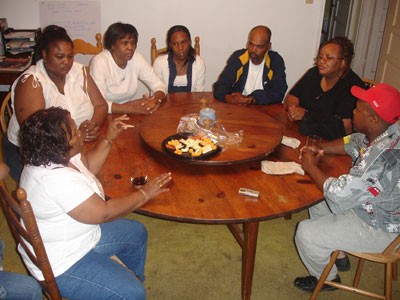 "They got the wrong boy," Glover whispered dramatically. "He used to live one street from me. Nobody was ever brought to justice for that."

"And no apology probably, either," said Brockman.

"They tried," said Glover. "You know, lots of things happened. A lot of talk and a lot of words, but nothing really happens."

Scott Bass let out a low whistle and shook his head. Black folks dying for their purported sins. Guilty white folks walking away without a stain. Such tales are not new to Bass, who grew up in the rural southeastern North Carolina town of Clinton. But they still astonish him.

North Carolina has come a long way since the vigilante injustice of the Jim Crow era. The state's system of justice has changed even since 1995, when death sentences peaked at 34, accounting for about 5 percent of the murders. Since 2002, the state has averaged fewer than a half-dozen death sentences a year. Since the mid-1990s, the number of murders also has dropped, from about 700 a year to slightly more than 500. The state has raised professional standards for capital defense attorneys, abolished the death penalty for the mentally retarded, given prosecutors the option to pursue life sentences in first-degree murder cases, required prosecutors to share all their evidence with the defense team and established a special committee to examine injustice in the death-penalty system, including racial bias.

"That has to do, I guess, with the mind-set, the thought of the folks that are on the jury," Democratic state Rep. Beverly Earle, from Mecklenburg County, said a few weeks after Brown's execution. "You know, you've got to change somebody's whole attitude about race and gender."

Earle cochairs the NC House Select Committee on Capital Punishment. The committee has been meeting each month since December and is taking a break during the summer legislative session, which began May 9. The committee will reconvene next fall. Earle hopes she and her colleagues on the committee will be able to convince the other members of the House to freeze executions and allow time for more in-depth study.

"I'm even more convinced that we need to look at the system and find a way to correct some of what the problems are," said Earle, who also is a member of the Legislative Black Caucus. "Some things, probably, will never be able to be corrected because you're dealing with human beings or attitudes."

Between 1993 and 1997, the death-sentence rate in North Carolina was 6.4 percent when minorities killed whites, 2.6 percent when whites killed other whites and 1.7 percent when minorities killed other non-whites. The numbers show who's important -- and who's dangerous -- in the eyes of the judicial system. They paint the systemic racism in black and white. But to hear about the flesh and blood -- someone's neighbor, or brother -- is to realize that statistics don't begin to tell a real human story.

"So what was Willie like?" Scott Bass asked Glover as the folks gathered at the table nibbled their lasagna. 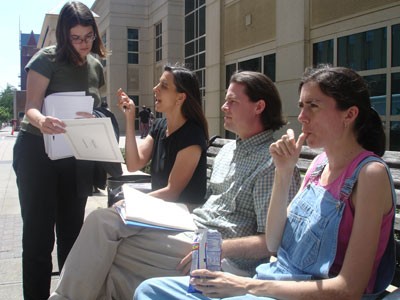 "Oh, he was, he was a boy, a rough boy. I mean, I mean, rough like you'd get him a pair of pants today, and tomorrow, the next day, he'd have holes in them. You know, back then, you know, you didn't have a whole lot of stuff, so you had to use your imagination if you had to have fun. He climbed trees, rode bikes -- back in the day, you know, the game was cowboys and Indians."