Ankhs for the memories

"My parents never introduced me to African history or African pride," Ali Steele says. "So as a young black male, I grew up really depressed and had low self-esteem."

Steele, a Charlotte R&B and neosoul singer who has appeared on recordings by numerous local artists including rapper Black Linen, is perched on a folding chair inside Umbrella Mindz Studios' new digs at Camp North End on Statesville Avenue.

The singer has thoroughly saged the room and prepared a pot of relaxing hot tea for our talk. He's also brought along a handful of sacred stones. It's all part of a lifestyle that reflects not just Steele's musical ideas, but also his spiritual ones.

Steele got his spirituality from his biggest musical hero, Erykah Badu. "She is the No. 1 icon in my life that influenced me the most," says Steele, 27. He's wearing a pair of faded jeans, brown docksiders and a flowing gray Egyptian jellabiya with white squiggly lines embroidered down the front. When he speaks, Steele's mess of brownish-black locks dangle over tender doe eyes, and his smile reveals a perfect Laurence Fishburne gap between his two front teeth.

Badu was talking about a lifestyle centered on tapping into knowledge from African elders regarding a pure, herbalist way of life: Ifa, kemetic yoga, all that. "It's helped me gain a little self-respect," Steele says. "A lot of people don't realize how, having dark skin, you get put down every day."

He emphasizes the words "every day."

On his new album Raw, which Steele will unveil during an album-release costume party on his birthday, Saturday, October 28, at the Peculiar Rabbit in Plaza Midwood, he addresses his healing process in tracks with names like "Lyfe Means Change," "Look Around," "Mental Hurdles" and "No Care." The latter, Steele says, is an appeal for respect.

Between sips of tea, the singer spontaneously breaks into an a cappella version of the song:

"No care for the life of a black man," he sings. "King, born in this world, denied his crown, and / Brainwashed, stripped of culture, poisoned / Disconnected from the earth."

It's a song about getting beat down, but it's also about regaining control of one's destiny through bonding with Mother Nature. He continues, singing four lines that repeat the words "the earth," for emphasis:

"Bring it back, we gotta get back to the earth. / We the people learned to live from the earth. / It's our duty to nourish the earth. / Restore balance, let them stop killing the earth."

Raw is a song-cycle documenting Cedric Ali Steele's journey from a kid growing up on the west side of Charlotte, getting bullied and taunted, and then learning to love himself and his people as royalty. He was born into a family of church-going musicians. His mother, Sandra Cornelius Little, sings with the gospel quartets The Mighty Pilgrimaries and The Anointed Vessels. But young Ali gravitated to secular R&B and neosoul.

"I remember my dad always listening to the O'Jays and Earth, Wind & Fire, and my mom singing all the time. She's an amazing singer," Steele says. "She sings kind of like Anita Baker or Gladys Knight. So I was always into the really authentic singers — the ones who actually sing better now than when they first came out."

It was Erykah Badu that rocked Steele's world, though. "She's who inspired me to do music," he says, "and that's what really touched my life and actually helped me to overcome a lot of obstacles in my life.

"It was through her that I was introduced me to the ankh," Steele adds, referring to the symbol that resembles a Christian cross but has a loop in place of the top arm. It was a symbol of life to ancient Egyptians. "So Erykah Badu helped me explore this kind of thing and influenced me into the lifestyle that I live now."

That lifestyle is spiritually rooted in natural living, but it's not tied to any specific religion. Steele considers himself an Omnist, he says, which refers to those who recognize and respect all religions and conceptions of God. "I believe in God," he says, "but I believe we all have different views on who and what God is, and none are right or wrong."

Steele recorded his first demo when he was just 18, and eventually began posting to Soundcloud and YouTube his early versions of Raw tracks as well as interpretations of songs by artists including Badu, Teairra Marí and Childish Gambino. Eventually, Steele made his way into a group of other woke Charlotte hip-hop and R&B artists making names for themselves at spots in Plaza Midwood and now Camp North End: Black Linen (who raps on the Raw track "Fool"), LeAnna Eden (who sings on "Climax"), and others.

"Ali is special because he has a voice neosoul has forgotten — that mid-tone, raspy, robust voice," says Black Linen. "It gives a lot of music that he does this type of melencholy, rolling-in-the-deep feel.

"Plus," Black Linen adds, "he is a diligent entrepeneur. He has many talents."

In fact, Steele, who studies graphic design at Central Piedmont, also makes jewelry, including several versions of ankhs, which he sells at festivals and on his website Ethnic By Ali. It's all part of his holistic approach to life. 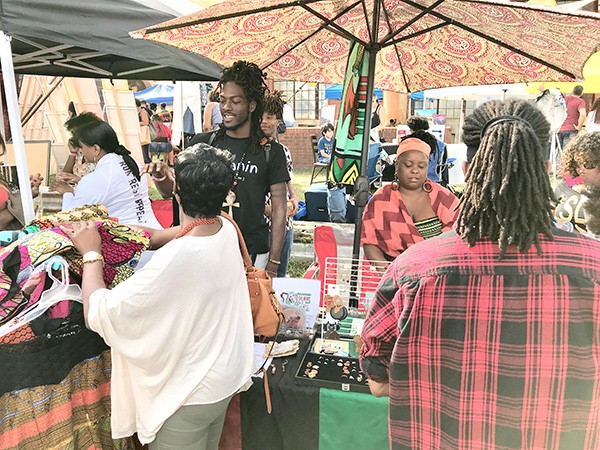 He points to opening track "Lyfe Means Change," an earlier single whose updated album version begins with a wet and woozy, circus-like synth intro before his warm and velvety voice flows into the current. "That's basically about me going through changes as a young African-American male, transitioning from being a teenager to a young adult, and the experiences I've been through undergoing those changes," he says. "You know, a lot of people look at you and they feel like you should live your life in a certain way, but when you have dreams and aspirations, you have to follow them. I had dreams. I wanted to do music. So I had to step outside of my box and make the changes I wanted in my life in order to do that."

I tell Steele that I'm about to make a change in my life; I'm moving into a new house, shedding myself of some of my own past history and going forward. He gets excited, rises from his chair and scurries over to a corner of the studio.

"You need some sage!" Steele says, pulling a few crispy leaves from a larger bundle. He smiles again, and the room lights up.

"You need to make sure you sage the whole place," he instructs. "It'll get rid of any negative energy."

When Steele performs at the Peculiar Rabbit on Saturday, you can be sure he will have saged himself before he hits the stage. It's a ritual. It's a lifestyle. It's who Ali Steele is. And today there's no time for self-flagellation. He's proud of himself.