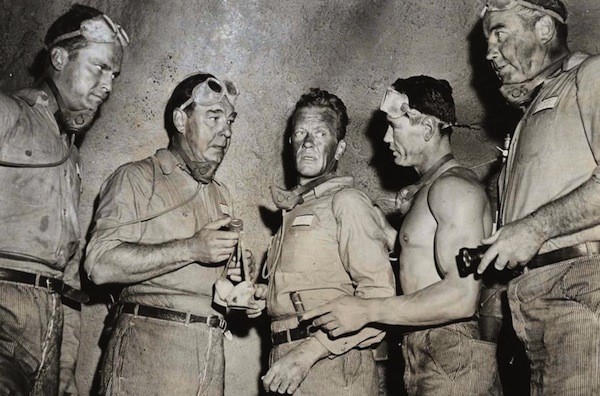 BIG HOUSE, U.S.A. (1955). The moniker — and poster art — pegs this as a standard prison flick, but that's only part of the story. Indeed, it's the unusual structure — along with an impressive cast — that makes this picture stand out. Boasting a screenplay by film noir vet John C. Higgins, this begins as a kidnap yarn, with ruthless small-time hood Jerry Barker (Ralph Meeker) snatching an asthmatic boy lost in a Colorado national park, knowing that the lad is the son of a wealthy industrialist (Willis B. Bouchey). The FBI in the form of Agent James Madden (Reed Hadley) takes charge of the investigation, and the action eventually switches to a prison housing hardened convicts Rollo Lamar (Broderick Crawford), Benny Kelly (Charles Bronson), Alamo Smith (Lon Chaney Jr.) and "Machine Gun" Mason (William Talman). The manner in which the movie toggles between various characters and incidents is inspired, with the park material proving to be more original than the prison escapades. The film pulls no punches in depicting the viciousness of its characters, with a couple of crimes — one performed by Jerry, the other orchestrated by Rollo — still retaining their ability to shock. Chaney was as much an underrated character actor as a major horror star, and it's nice to see him in this picture; ditto Bronson, who had recently stopped using his birth name (Charles Buchinsky) and was beginning to rack up supporting credits on his way to international stardom. And if Talman looks familiar, he played district attorney Hamilton Burger, the perpetual adversary of Raymond Burr's Perry Mason, on the long-running television series. 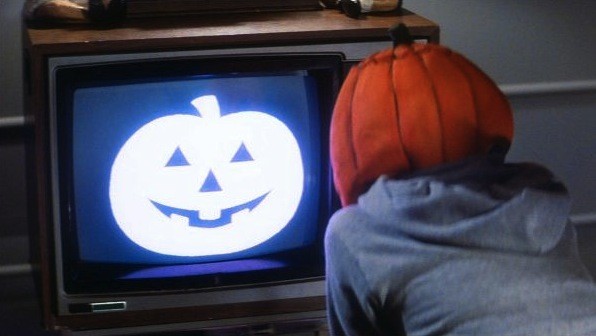 HALLOWEEN III: SEASON OF THE WITCH (1982). While 1981's Halloween II picked up immediately where the 1978 original left off, this third franchise flick is a different beast altogether. After Halloween II, writer-director John Carpenter and company decided to make a series of Halloween films that each told a different story, none involving masked maniac Michael Myers. Unfortunately, Halloween III: Season of the Witch was such a commercial and critical bust that the idea was scrapped and Myers returned for the next installment (called, naturally, Halloween 4: The Return of Michael Myers); we've been stuck with damn sequels, spin-offs and rip-offs ever since. Too bad, since Halloween III, while not a complete success, at least offers something different from the norm. The fanciful story was conceived by renowned British writer Nigel Kneale, who was so offended by the violence and gore director Tommy Lee Wallace added to his script that he had his name removed from the project. The plot concerns the efforts of a toy manufacturer (Dan O'Herlihy) to use his company's best-selling Halloween masks in a diabolical scheme that would wipe out scores of children across the country on All Hallows' Eve. As the two people who stumble across his plan, Tom Atkins and Stacey Nelkin make for dull, one-dimensional heroes, but some of the set-pieces — the opening chase, the Kupfer family's mishap, and more — deliver the goods. And if you do see this, just try to get that Silver Shamrock commercial jingle out of your head.

There are no extras on the bare-bones Blu-ray; for those, one would have to turn to the Blu-ray edition released by Shout! Factory in 2012. 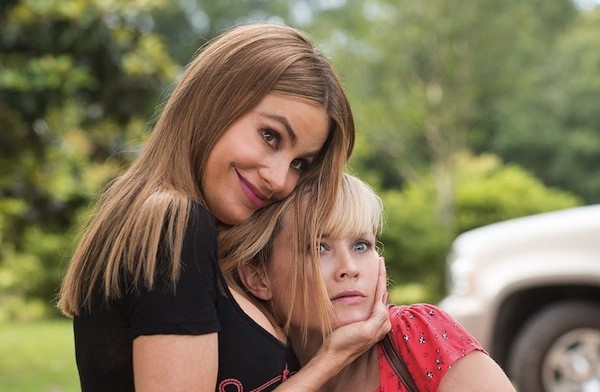 HOT PURSUIT (2015). The summer movie season isn't even over and here we're already being treated to one of its earliest duds. The teaming of Reese Witherspoon and Sofía Vergara goes well beyond oil and vinegar — it's more like ketchup and Frosted Strawberry Pop-Tarts. Witherspoon plays Cooper, a blundering Texas cop who's given a chance to redeem herself when she's tasked with protecting Daniella Riva (Vergara), the wife of an informant. Constantly bickering, the two must attempt to put their vast differences aside once trained assassins and corrupt cops pick up their trail — along the way, Daniella makes fun of Cooper's granny panties, Cooper disguises herself as a Justin Bieber look-alike, and the two discuss the sexual move known as "the pirate hook." Viewers who sit through Hot Pursuit might occasionally feel as if they themselves are on the receiving end of a more literal "pirate hook" maneuver. Based on their past credits, the participation of director Anne Fletcher (27 Dresses, The Guilt Trip) accounts for the film's erratic pacing while the presence of TV-born-and-bred scripters David Feeney (the James Belushi sitcom According to Jim) and John Quaintance (the Matt LeBlanc sitcom Joey) explains the boob-tube beats surrounding the would-be laughs. There are a few funny bits scattered around the picture and, given the lameness of the majority of the gags, their arrivals prove to be as startling as when Norman Bates swiftly pulled that shower curtain aside and began stabbing Marion Crane. Most of these moments owe their heartiness to Witherspoon, who often rises above the tired nature of her role (a female cop who's a klutz on the job and a failure on the dating scene). It's easy to peg Vergara as a TV star because she delivers the type of broad performance often seen when a small-screen player hits the big screen. She's all oversized gestures, oversized emotions, oversized enunciation — in a word, she's terrible. Witherspoon, on the other hand, draws upon the comedic chops that sustained her back in the days of Election and Legally Blonde, before she became a serious, Oscar-winning actress. She's superb at drama, of course, but it's nice to see her playing loose and funky once again. It's just a shame it has to be in a movie as criminally bankrupt as this one.

Blu-ray extras include a behind-the-scenes featurette; an alternate ending; and a gag reel. 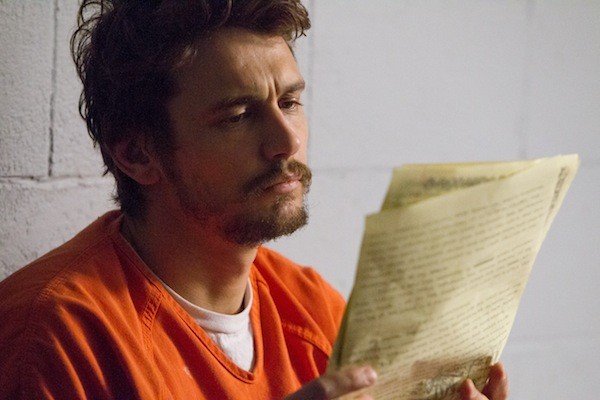 TRUE STORY (2015). While it may be true that True Story is indeed based on one, the real story is how this intermittently interesting but hopelessly erratic picture bungles what should have been an easy assignment. Adapted from the book by Michael Finkel, the film finds journalist Finkel (Jonah Hill) being given the boot at the New York Times for embellishing an important story. Following his momentary lapse in judgment (his previous articles for the paper were all sound, demonstrating that he wasn't a serial Stephen Glass sort), he learns that no other publication will now touch him, leaving him plenty of time to wallow in self-pity. But then he receives a strange phone call, one alerting him to the fact that a man named Christian Longo (James Franco) has just been apprehended for murdering his wife and three small children. Finkel wonders what this has to do with him until he discovers that Longo was going around identifying himself as journalist Michael Finkel. Intrigued, Finkel arranges a cell visit with Longo, and this kicks off what appears to be both a friendship, as the men seem to genuinely like each other, and a business relationship, since Longo claims he's innocent and wants to give his story exclusively to Finkel. But does he end up telling Finkel the truth, or does he just keep piling lies on top of lies? True Story is more of a character study than a murder-mystery, and for this sort of picture to work, viewers require access into the minds of its players. Think, for instance, of the "quid pro quo" sessions between Clarice Starling and Hannibal Lecter in 1991's The Silence of the Lambs and how integral these sequences proved to be to the audience's understanding of their complex relationship. True Story, on the other hand, never probes as deeply as it must, a fault that rests primarily with the script by director Rupert Goold and David Kajganich but also with the work by its leading players. Hill and Franco aren't bad, but their performances remain frustratingly on the surface — this is especially true of Franco, who often comes across more as a guy peeved that someone tapped out the frat-house keg than a tortured individual potentially engaged in Machiavellian maneuverings.

Blu-ray extras include audio commentary by Goold; a making-of featurette; deleted scenes; a piece on Michael Finkel; and an alternate ending. 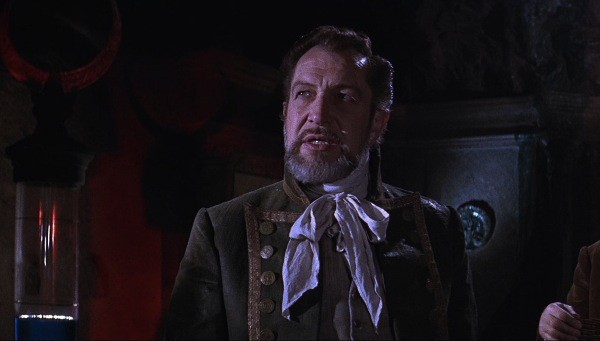 WAR-GODS OF THE DEEP (1965). A great director who has never received his proper due, Jacques Tourneur's credits include three horror classics (Cat People, I Walked with a Zombie and Curse of the Demon), one film noir masterpiece (Out of the Past) and assorted movies in other genres, including a World War II yarn featuring Gregory Peck's film debut (Days of Glory). It's a shame, therefore, that Tourneur's career ended with this disappointing fantasy yarn that's also known by the title City Under the Sea. Vincent Price had just ended his run of tremendously successful Edgar Allan Poe adaptations for Roger Corman, so the makers of this picture hoped to capitalize by snatching the title of a Poe poem ("The City in the Sea") and having the actor recite a few lines in voiceover at a couple of points during the film. It didn't fool anyone: Despite the tenuous Poe connection, this is more of a cut-rate version of such nautical adventures as 1954's 20,000 Leagues Under the Sea and 1961's Voyage to the Bottom of the Sea. Price stars as the ruler of an underwater city who has to contend with the unexpected arrival of a pair of surface dwellers (Tab Hunter and David Tomlinson) seeking their kidnapped friend (Susan Hart), who — wouldn't you know it — looks exactly like the ruler's dearly departed love. The production design is fairly impressive, but the race of sea creatures encountered by the heroes is hardly menacing (they look like those startled emoticons), and the repeated comic shtick — mostly represented by the fussbudget played by Tomlinson (Mr. Banks in Mary Poppins) and his pet rooster — kills any chance of the piece establishing any sense of awe or any sort of atmosphere.

Blu-ray extras consist of an interview with Hunter and the theatrical trailer.