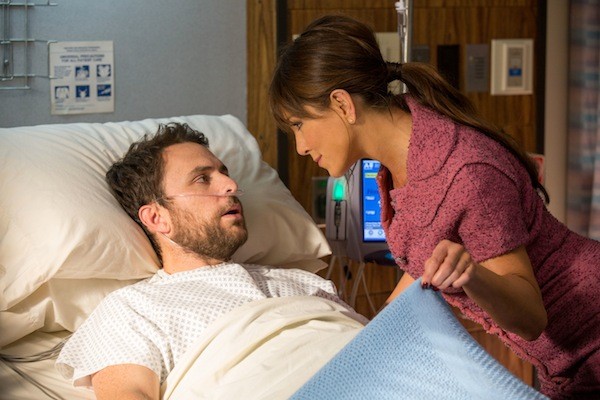 Arriving just in time to soil the holiday season, Horrible Bosses 2 feels less like a sequel to the fairly engaging 2011 original and more like a companion piece to the current Dumb and Dumber To. It's no surprise, then, to learn that director Sean Anders had a hand in the scripts for both sorry sequels, and also helmed Adam Sandler's That's My Boy to boot. If the need ever arises for a fourth Hangover movie, Anders is clearly the go-to guy.

Until the storytelling got sloppy during its final third, the original Horrible Bosses yielded a hearty number of laughs in its tale of hapless working grunts Nick (Jason Bateman), Kurt (Jason Sudeikis) and Dale (Charlie Day) and their efforts to exact revenge on their psychotic bosses Dave (Kevin Spacey), Bobby (Colin Farrell) and Julia (Jennifer Aniston). In this new picture, the lads have decided to go into business for themselves, but their naivety puts them at the mercy of shark-like businessman Bert Hanson (Christophe Waltz) and his son Rex (Chris Pine). With their backs against that proverbial wall, the trio once again turn to ex-con Motherfucker Jones (Jamie Foxx) for advice and, after some deliberation, they decide that a kidnapping might provide the solution to their problems.

There are a few genuine laughs to be found in Horrible Bosses 2, although viewers will probably have more luck locating gold doubloons in the Myrtle Beach sands. Otherwise, the humor is strictly of the sort that will leave 14-year-old boys gasping for air through their explosive bouts of diarrhetic laughing but find everyone else rolling their eyes. There are gags involving rape, pedophilia, gay panic, and racism. They're all meant to shock audience members into laughing in spite of themselves, but they're ultimately as daring — and as clueless — as a Republican politician name-dropping Ronald Reagan during a campaign speech.

The three writers of the original came up with great characters in the horrible bosses played by Spacey and Farrell but floundered when it came to creating a worthy equal for Aniston, whose sex-addicted dentist repeatedly tried to score with Dale. The four scripters for this sequel (two returning from the first flick) don't solve the problem here, believing that hilarity ensues just from the mere notion of a woman having a strong sex drive (see, that's funny because ladies aren't supposed to like sex; that's the guy's job!). At least the character of Rex Hanson proves to be a worthy antagonist for our heroes — sharply played by Pine, he provides the only comic bite to a toothless endeavor that's otherwise as amusing as a root canal.