He's in the highly technical field of supplying and installing fiber optics and telecommunications wiring that makes the modern world turn. (Think of all those blue cables under your desk at work.) His Charlotte-based company, Network Cabling Systems, will install some of the cabling for the Democratic National Convention in September.

Then there's Romero's father, Carlos, a fully engaged 70-year-old who speaks with a heavy accent. Fifty years ago, the elder Romero quit selling coffee beans at the family store in Ecuador and moved to the U.S. After settling into a career here, he brought his wife and Louis, then an infant. When asked if he ever feared the uncertainties of a new life in America, he explains: "I am optimistic. I see opportunity when I open my eyes in the morning every day." 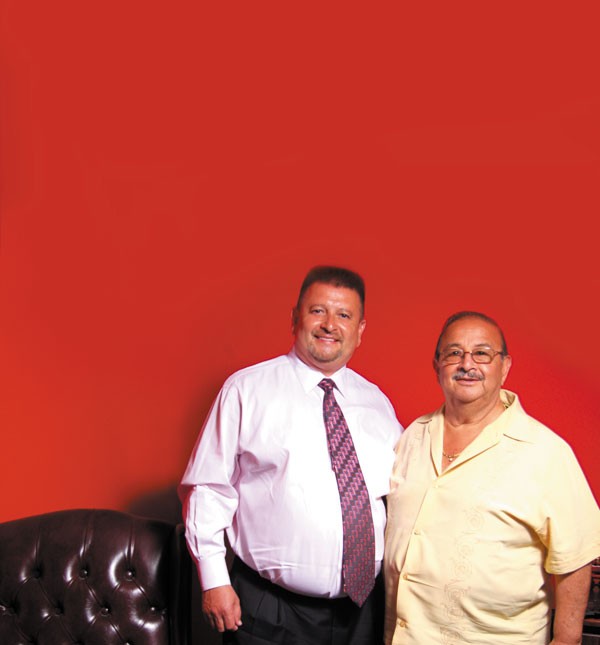 On Thursday, June 14, the Romeros will be participating in EMERGE, a national Hispanic networking series whose inaugural event will be held at the Hyatt House on Trade Street. Miami-based PODER Magazine and Televisa Publishing + Digital, a major Spanish-language multimedia company, are hosting the event, which is free to the public. The group expects more than 100 local Hispanic professionals and entrepreneurs as well as business and civic leaders to attend the meet-and-greet, which runs from 6 p.m. to 10 p.m. A panel discussion will include Andrea Bazán, the Operation Vote director of Obama for America, and Astrid Chirinos, executive director at the Charlotte Latin American Chamber of Commerce.

The EMERGE event is designed to help showcase progress being made by local Latino professionals, says Armando Bellmas, spokesman for the Charlotte Latin American Coalition. It's also intended to counterbalance what Bellmas describes as the "culture of fear and anti-immigrant legislation" that pervades the country, often encouraged by politicians. Former GOP presidential front-runner Herman Cain "joked" about electrifying the fence that runs along the U.S.-Mexican border to kill anyone who crossed it. Then there's the groundswell of people who would deny U.S.-born children of undocumented immigrants food stamps, in-state college tuition and healthcare.

That the event is coming to North Carolina is no coincidence. The Hispanic population totals 800,000, 11th highest in the U.S. and a 943-percent jump since 1990, according to a recent study using 2010 U.S. Census information and other sources.

The growth rate of Hispanic-owned businesses in North Carolina remains among the highest in the country, at about 136 percent — from 9,043 in 2002 to 21,301 in 2007 — according to the Census, which releases the data every five years. The numbers for 2012 are not yet available. Hispanic spending power, the amount spent on goods and services statewide, also has been growing at a high rate, increasing from $5.1 billion in 2000 to $14.2 billion in 2010, according to a report released last year by the Durham-based N.C. Institute of Minority Economic Development.

Then, there's this: In 2000, Hispanic workers accounted for more than 13 percent of Charlotte's white-collar crowd, including management and highly skilled trades, according to the U.S. Census. In 2009, the most recent data available, the figure was 19.2 percent and growing. African-Americans, the only other high-ranking minority, represented 31.2 percent in 2009.

Because Charlotte was largely bypassed by the major waves of immigrants who came to the U.S. a century ago, including Poles, Italians and Irish, it avoided a generational pattern of ingrained fear and suspicion of newcomers, says Tom Hanchett, historian at the Levine Museum of the New South. That made it more welcoming to newcomers than its Southern or Eastern counterparts.

AFTER ARRIVING from Ecuador, Carlos Romero first lived in New York City. A job temporarily brought him to North Carolina, and Romero decided Charlotte would be a more conducive place to raise his family.

Venezuelan Julio Colmenares made a comfortable living in his native Caracas as a graphic designer. But at 20, he came to the U.S. to learn English and pursue career opportunities that would help him in his native country. He fell in love with the U.S., Charlotte in particular. That was 15 years ago. "It was not planned," he says.

He had his Visa changed to allow him to stay, and like Romero, took classes at CPCC. That's where Colmenares met Veruska, his wife and the mother of their two children. At 35, he's now president and CEO of CGR Graphics. And he is an American.

"I'm always emotional about seeing my friends and family back in Venezuela," he says. "But when I sleep in my father's house, in my own bed, I feel like I'm sleeping in a hotel. When the plane touches down in Charlotte, I feel that it's good to be back home."

The EMERGE series, which also swings through Miami, Chicago and other cities, has become a sort of annual Hispanic business family reunion for peers such as Colmenares and the Romeros.