Hip-hop and the Million Man March

Where were the rappers during Louis Farrakhan's recent Day of Atonement in Charlotte?

On Oct. 16, 1995, black men from across America united at the National Mall in Washington, D.C., for the Million Man March, a grassroots campaign spearheaded by Nation of Islam leader Louis Farrakhan. "No leader could have put out this call and had the same results," says Rev. Kojo Nantambu, president of the Charlotte branch of the NAACP. Yet Farrakhan had help — big help. The hip-hop community played a large role in appealing to young black men.

When the Million Man March celebrated its 17th anniversary in Charlotte earlier this month, there was no major hip-hop involvement. Unlike 1995, when rappers ranging from Chuck D to Ice Cube, 2Pac to Mobb Deep, appeared on the hip-hop compilation One Million Strong. Many in the hip-hop community this year were unaware the Day of Atonement would be commemorated at all. Is this a sign that the movement has lost relevance in today's hip-hop culture? Has the Nation of Islam missed an opportunity to embrace a new generation? 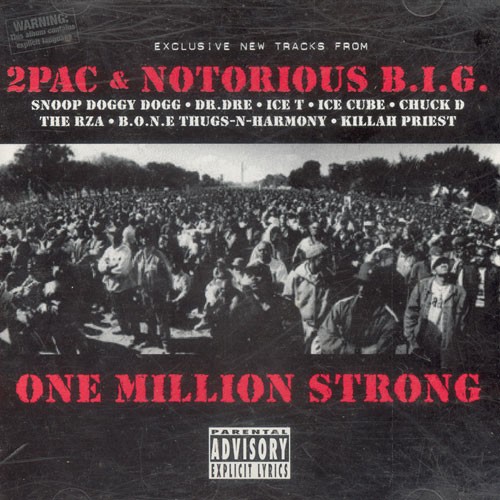 In '95, gangsta rap was shooting up the pop charts, but you could still hear and see balanced depictions of black America in the wider cultural lens of hip-hop. On one hand, 2Pac was baring his soul in songs like "Me Against the World," while conscious rappers such as KRS-One were calling for justice for death-row inmate and former Black Panther Party member Mumia Abu-Jamal, whom many felt was railroaded because of his political activism. Down in Atlanta, Goodie Mob and Outkast were bringing a Southern sensibility to hip-hop that would take the music by storm within the next decade.

For a whole generation, hip-hop had represented a complete social commentary, with history, struggle, life lessons, love songs and gangstas all woven into its spine. This was the atmosphere in popular culture when the National African American Leadership Summit announced it was holding a Million Man March in the nation's capital in October 1995.

That month, Dasan Ahanu was a college freshman at North Carolina A&T University. "It was so big ... It was just so beautiful," Ahanu remembers of the march. Today, he is an author, slam poet, MC and professor of creative writing at St. Augustine College in Raleigh. "I never saw anything like that. I can't remember another moment of mass movement that I can associate with up until that point."

Anthony "Twenty20" Collins, a Charlotte-based educator, poet and MC, recalls a fear among the nation's dominant culture of Farrakhan's impact on young black men. Collins believes music-industry executives and others quashed the then-popular Afrocentric tendencies in hip-hop in favor of its more gangsta-leaning artists. "Certain powers-that-be saw that, 'they're advancing, they are starting to use this new tool that they have and it's stronger than we thought. They're having this march, and now they're talking about it in the music. They're talking about how they're going to mobilize and take up ... OK, then we'll only play this kind.' And you slowly saw positive, uplifting songs fade away. Like, name me one positive song on the radio in 1998?"

Collins, Ahanu and Nantambu all see a direct correlation between the Million Man March and the decline in positive mainstream hip-hop acts such as Public Enemy, Gang Starr and A Tribe Called Quest. Positive hip-hop had worked in solidarity with the ideals of the Million Man movement, but Nantambu says gangsta rap — which the mainstream music industry promoted — was a hindrance. (In later years, leaders like Common, Jay-Z and Benjaman Chavis, former head of the NAACP, would help to change that.)

Many young people today have little knowledge of the historic significance of that October day in 1995, when more than a million men gathered in the nation's capital. For the first time in a generation, masses of black men were televised across the country as leaders and pillars of their communities, rather than as predators, deviants or criminals. Although most of the attendees of the original Million Man March were non-Muslim, the sight of clean-cut black men in suits gave the event a more dignified feel. A record number of black men focused on change, pledged to atone and rebuild their communities.

"It is so unfortunate that we were not steadfast and held on to the plan," Nantambu said at a press conference just prior to this year's Day of Atonement in Charlotte. "We lost sight of the plan, and because of that we have slipped back into a murky darkness where now we have lost our identity, we've lost control of our children and our community and we've gotten into a place now it's almost like we don't know where we're going." But, he added, it's not Farrakhan's fault.

Is it hip-hop's fault? Perhaps, Dasan suggests. "Where the African consciousness we had in the '80s was tied to the music, I think by 1996 that's pretty much gone," he says. "If you look at the titles and the subject matter from 1994 to 1996 — like Biggie to Red Man to Wu-Tang to Jay, even Nas' albums — when you look at what they're talking about, that's the condition that you sent black men into from the Million Man March, with no real blueprint for how to address [the problems] ... When I look out my window, that's what Nas is talking about, that's what Jay is talking about: A blueprint for how to get up out this."

The year 1996 marked a paradigm shift for rappers and a turning point in hip-hop's relationship with the music industry. It was the end of rap's golden age and the beginning of the major-label rush to sign any violent hip-hop coming down the pike. But some rap moguls took matters into their own hands. It was a direct result of the empowerment the Million Man movement had promoted. Instead of waiting for the mainstream music industry to translate hip-hop for mainstream consumption, rappers like Master P, the RZA and Jay-Z were releasing music on their own labels. Rappers began taking a larger stake in the business, giving birth to companies like Cash Money Records, the Wu-Tang dynasty and what we now know as ROC Nation.

"One of the things that hip-hop does so well is it creates a point of connection between people," says Dasan. "We just haven't done a good job of manipulating what that group [of people] does." But all is not lost, he adds. "The Nation [of Islam] still has a big place today, because they are representation of strength and discipline. If I were making a movement, [you] best believe I would call the Nation to make sure they are a part of it."

Any significant movement involves a system that will pull networks together, to uplift and hold each part of that system accountable. It appears that this became a point of disconnect among hip-hop, the Nation of Islam and the Million Man Movement. But Ahanu says hip-hop still has the potential to be a vehicle of change, and the Nation of Islam still has a positive message for black youth.